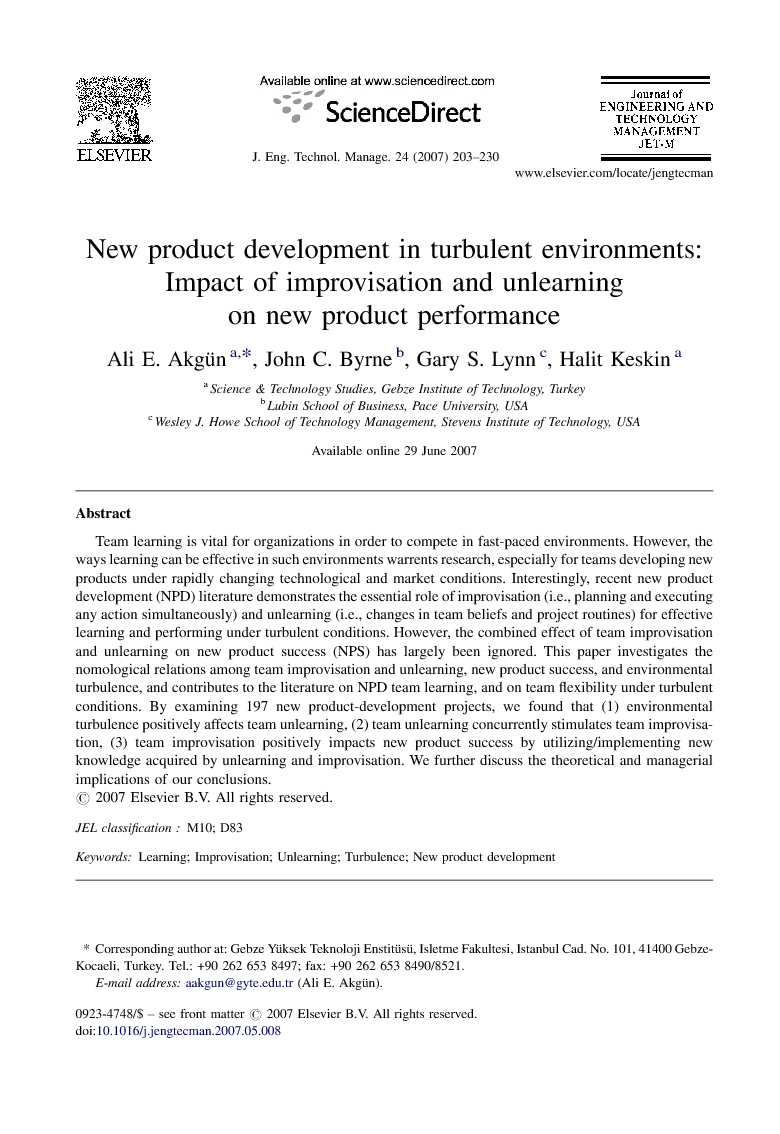 Starting in the early 1980s, a growing the emphasis was on the role of new product development (NPD) as a potential source of competitive advantage in the technology and innovation management literature (Cooper, 1984, Takeuchi and Nonaka, 1986, Booz et al., 1982 and Maidique and Zirger, 1985). For instance, Brown and Eisenhardt (1995, p. 344) noted that product development is seen as “among the essential processes for success, survival, and renewal of organizations, particularly for firms in either fast-paced or competitive markets.” However, NPD has potential risks and many challenges (Cooper, 2003). A key challenge faced by NPD projects is how to cope with environmental turbulence in order to reduce the risk of failure of either the project or the resulting product (Calantone et al., 2003 and Cooper, 2003). In this regard, technology and innovation management literature highlights the essential role of unlearning and improvisation to cope with the environmental changes and turbulence experienced during NPD activities (Akgün et al., 2006, Moorman and Miner, 1998a, Imai et al., 1988, Kamoche and Cunha, 2001 and Li and Atuahene-Gima, 2001). Especially, scholars pointed out that team improvisation, operationalized as planning and acting simultaneously (Moorman and Miner, 1998a), and unlearning, operationalized as changes in beliefs and routines (Sinkula, 2002 and Akgün et al., 2006), fosters flexible and impulsive responses to rapidly changing markets and technologies. For instance, Eisenhardt and Tabrizi (1995) indicated that teams using an improvisation strategy could accelerate product development in highly turbulent industries, such as computers. Similarly, Moorman and Miner (1998a) empirically found that improvisation is important for NPD processes under turbulent conditions. Whereas Iansiti (1995) and Akgün et al. (2006) noted that team unlearning helps teams to accommodate new knowledge about evolving customer needs and technologies and facilitate an effective NPD process that can tolerate the rapid changes in technology and markets. However, it is interesting to note that the researchers investigated team improvisation and unlearning separately, omitting their interrelations in a NPD project team context as a research question. This may be explained by recent insights of the organizational and team-learning literature, which assert that improvisation and unlearning are, in essence, different avenues of the team-learning process and are covariates to each other (Akgün et al., 2003 and Moorman and Miner, 1998b). In fact, the NPD process and team flexibility in turbulent environments predominantly lies in the discussions of team improvisation and unlearning, because: • Fixed routines and beliefs stand in the way of impromptu behavior, because they create a path dependence for the learning process in general (Fowler et al., 2000) and for improvisation in particular (Moorman and Miner, 1998b). For instance, researchers indicate that beliefs and routines can be entrenched by positive feedback (Leonard-Barton, 1995, Methé et al., 1997 and Kash and Rycroft, 2002). If positive feedback takes place rapidly, consistently, and broadly enough, a “lock-in” (behavior/reward) may take place (Mezias et al., 2001 and Kash and Rycroft, 2002). The first beliefs and routines then tend to be repeated and may be the only ones ever developed. In this regard, a path-dependence, result of the fixed routines and beliefs, constrains the search for new learning opportunities and restricts a team's functioning and acting. Especially when a team plans and executes an action simultaneously, i.e., team improvisation, the belief structures of the team members and the project routines need to be synchronized with that action for effective team functioning and problem solving, because (a) a team's beliefs, operating outside of normal conscious behavior—acting like a conditioned reflex, lead to perception rigidity, and thereby hinder the enactment of action as it unfolds, and (b) project routines, which formalize and regulate a team's behavior via project plans, procedures and norms, inhibit spontaneity and instinctive responses, and • team improvisation provides a methodology for a team to change its beliefs and project routines. Improvisation, which denotes ‘retrospective sense making’1 as shown by Weick (1993), or ‘reflection-in-action’ as indicated by Schön (1983), seeds the acquisition of new information and allows the criticizing, restructuring, and testing of the intuitive understanding of experienced phenomena (Schön, 1983 and Miner et al., 2001). A team queries its current practices, plans, and beliefs by obtaining new information and knowledge as a by-product of improvisation. This is observed readily in team improvisation through experimenting, rapid prototyping or trial-and-error problem solving that helps to generate and test new design alternatives, new market and technical perceptions, and new procedures and tools (Miner et al., 2001). Accordingly, this study elaborates on recent research dealing with the concepts of team learning and team flexibility by cross-functional NPD project teams. In particular, the contribution of this paper is that it adds to the growing body of literature on cross-functional NPD project teams concerned with the link between team unlearning and improvisation in an environmental turbulence setting, which has been long ignored. To our knowledge, we are among the first to examine empirically the relationship between improvisation and unlearning in the performance of NPD projects and new product success (NPS) in the context of turbulence and learning.

The literature on organizational and team learning demonstrate that learning is vital for the performance of organizations and teams. It is clear that learning in turbulent environments and times is challenging for organizations. Any entity – organization, group, or individual – needs to rid itself of some old beliefs, structures, and procedures and allow itself to improvise to aid in learning new ones. However, there is still a lack of empirical testing of the interaction between improvisation and unlearning in NPD teams. This study examined the interaction between unlearning and improvisation in NPD teams and linked them to knowledge implementation and new product performance in the context of environmental turbulence. This study empirically demonstrated that team improvisation and unlearning provide team flexibility in turbulent environments and impact new product performance via knowledge utilization and implementation.