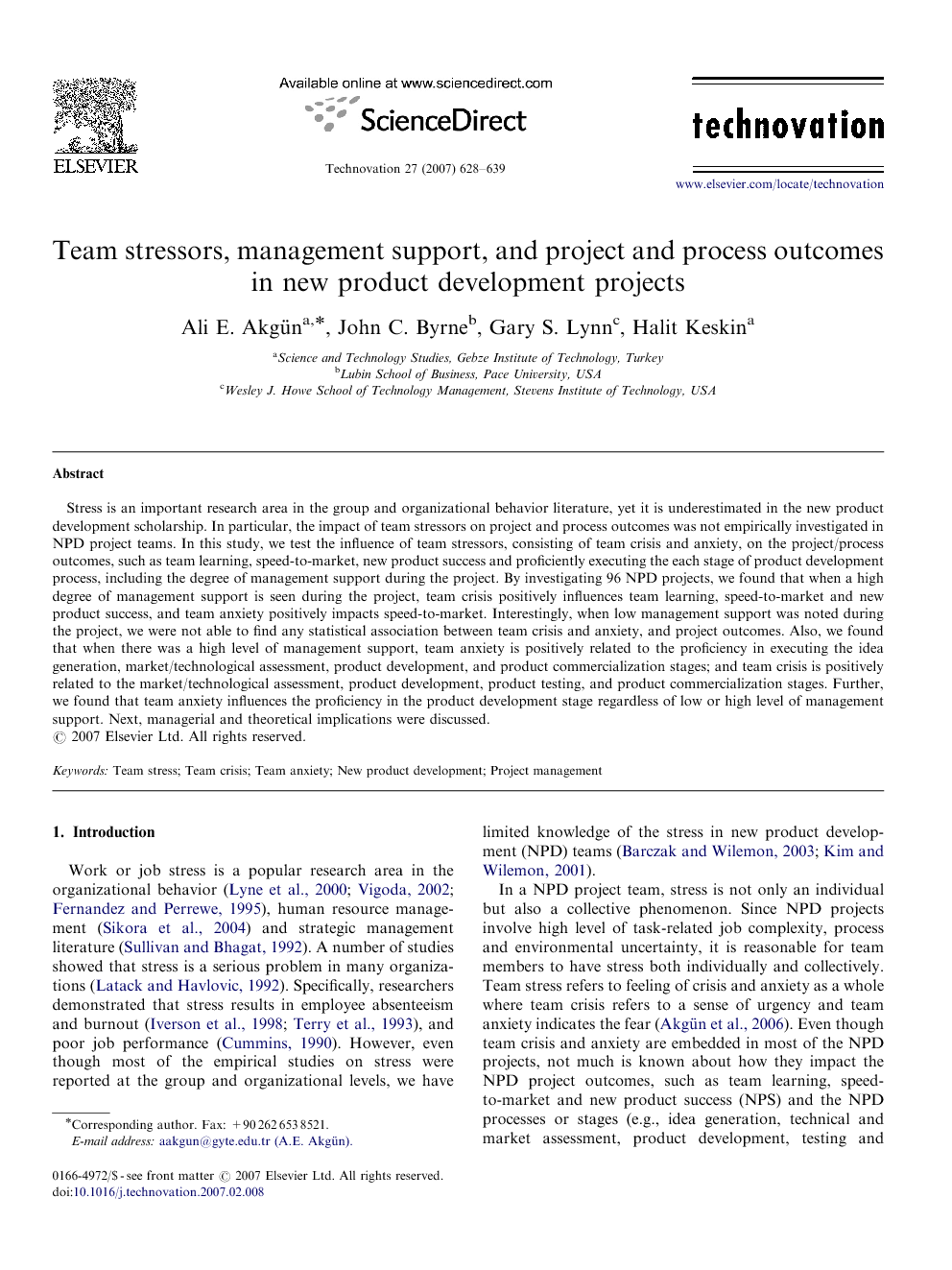 Stress is an important research area in the group and organizational behavior literature, yet it is underestimated in the new product development scholarship. In particular, the impact of team stressors on project and process outcomes was not empirically investigated in NPD project teams. In this study, we test the influence of team stressors, consisting of team crisis and anxiety, on the project/process outcomes, such as team learning, speed-to-market, new product success and proficiently executing the each stage of product development process, including the degree of management support during the project. By investigating 96 NPD projects, we found that when a high degree of management support is seen during the project, team crisis positively influences team learning, speed-to-market and new product success, and team anxiety positively impacts speed-to-market. Interestingly, when low management support was noted during the project, we were not able to find any statistical association between team crisis and anxiety, and project outcomes. Also, we found that when there was a high level of management support, team anxiety is positively related to the proficiency in executing the idea generation, market/technological assessment, product development, and product commercialization stages; and team crisis is positively related to the market/technological assessment, product development, product testing, and product commercialization stages. Further, we found that team anxiety influences the proficiency in the product development stage regardless of low or high level of management support. Next, managerial and theoretical implications were discussed.

Work or job stress is a popular research area in the organizational behavior (Lyne et al., 2000; Vigoda, 2002; Fernandez and Perrewe, 1995), human resource management (Sikora et al., 2004) and strategic management literature (Sullivan and Bhagat, 1992). A number of studies showed that stress is a serious problem in many organizations (Latack and Havlovic, 1992). Specifically, researchers demonstrated that stress results in employee absenteeism and burnout (Iverson et al., 1998; Terry et al., 1993), and poor job performance (Cummins, 1990). However, even though most of the empirical studies on stress were reported at the group and organizational levels, we have limited knowledge of the stress in new product development (NPD) teams (Barczak and Wilemon, 2003; Kim and Wilemon, 2001). In a NPD project team, stress is not only an individual but also a collective phenomenon. Since NPD projects involve high level of task-related job complexity, process and environmental uncertainty, it is reasonable for team members to have stress both individually and collectively. Team stress refers to feeling of crisis and anxiety as a whole where team crisis refers to a sense of urgency and team anxiety indicates the fear (Akgün et al., 2006). Even though team crisis and anxiety are embedded in most of the NPD projects, not much is known about how they impact the NPD project outcomes, such as team learning, speed-to-market and new product success (NPS) and the NPD processes or stages (e.g., idea generation, technical and market assessment, product development, testing and commercialization) completed proficiently. Organizational and work group level studies have conflicted arguments on the impact of stress on the performance and processes, however. While some scholars argued that stress has a significant implication for business success (Parasuraman and Alutto, 1984), others indicated the deteriorating impact of stress on performance (Tang et al., 2001). However, as pointed out by some writers, the issue is not the existence of stress that influences the performance, rather it is stress management interventions that determine the impact of stress on the performance (Dewe and O’Driscoll, 2002). Specifically, management interventions and support mitigates the negative influence of stress on performance, which then turns the stress into a strategic tool to improve the firm performance. Therefore, our goal is to empirically test the influence of team stressors, i.e., crisis and anxiety, on the project and process outcomes in case of a high and low level of management support during the NPD project, which has been neglected for a long time in the NPD literature.

In this study, we investigated the importance of management support for project outcomes when NPD teams experience crisis and anxiety. Our findings indicated that team crisis and anxiety positively influence the team learning, speed-to-market, and NPS when there is a high management support during the project. Specifically, a crisis and anxiety stimulates team members to push their efforts further to solve product, process and customer related problems, develop the product on time or before that, and launch it successfully. However, our findings indicated that while team crisis is needed for team learning, and NPS, team anxiety is advantageous for speed-to-market. In particular, crisis or a sense of urgency fosters a climate for the team such that they believe that the project, product development activity and the potential benefits are advantageous for both the customers and the firm. Accordingly, the team members do their best to incorporate what they learned into new product, solve the issues raised and improve the product development process throughout the project. Anxiety or fear was seen to speed-up the product development process. It appears that anxiety, as a response to a feared stimulus, encourages teams to give their attention to the threat. For instance, when team members feel that they will loose their jobs if the project fails, they will be more careful and eager to launch the product faster with a greater focus on success. Managers we interviewed also noted that: As a manager responsible for the project X, I found that the team members will often want to do what they like to do rather than what needs to be done. We need to keep some tension to make sure all understand that there is a sense of urgency, otherwise some become complacent. Actually, I do not see too much of a problem here—the senior manager is constantly walking in and asking the teams what they are doing. In truth, it is sometimes a problem; we sometimes need a rest. We have contests. Some of the team members do not like others very well and it creates energy to do better. My job is to make sure it does not go too far. All of my teams are technical and this is sometimes a problem. They understand technology and always want to do “one more thing” but the company needs to make money. They need to be told to finish now. My men work real hard and do good work. They can not work all the time, they have families and need to rest the mind. An important part of my job is to let them see we understand their work and we want them and the company to win. Sometimes they need to be upset and I let them. This study also showed that each stage of NPD process benefits from team crisis and anxiety and a high level of management support. Team crisis and anxiety appears to address complacency and forces team members to perform proficiently and to carefully complete each product development activity. Team crisis and anxiety facilitate the set of activities such that project deliverables are rigorously scanned to ensure that quality and cost expenditures coincide with firm's purpose. It also guides team members to address customer needs and technological changes, and become sensitive its competitive attributes because of environmental changes. In a sense, team stressors promote reciprocal relationship between project management and business strategy to the extend that there exists a high level of management support. Managers also pointed out that: We have many problems, too often the technical people don’t understand the sales people and we sometimes wonder if any of us understand the customer. Everyone wants to do a good job but not everything works perfectly. So, to be sure, we communicate a lot and make sure take we are doing what we supposed to do. I am afraid that this is not always the best. Some of the team members are constantly brining in new information. They want to make sure that there are no surprises. Some do not like this, they want one decision and not changes. We had a project were the customer made a very strong specification. One of our team members created a problem when he said the customer was not correct and there is a better solution. There were many arguments. Finally, the customer agreed with him and we had a good solution and relationship. A large client of ours was under pressure to finish the project in a short time. We explained that to do this correctly, we must make sure that we only do each job once. It might take more time now but less time and less money later. This was difficult for everyone as each step had to be checked several times.