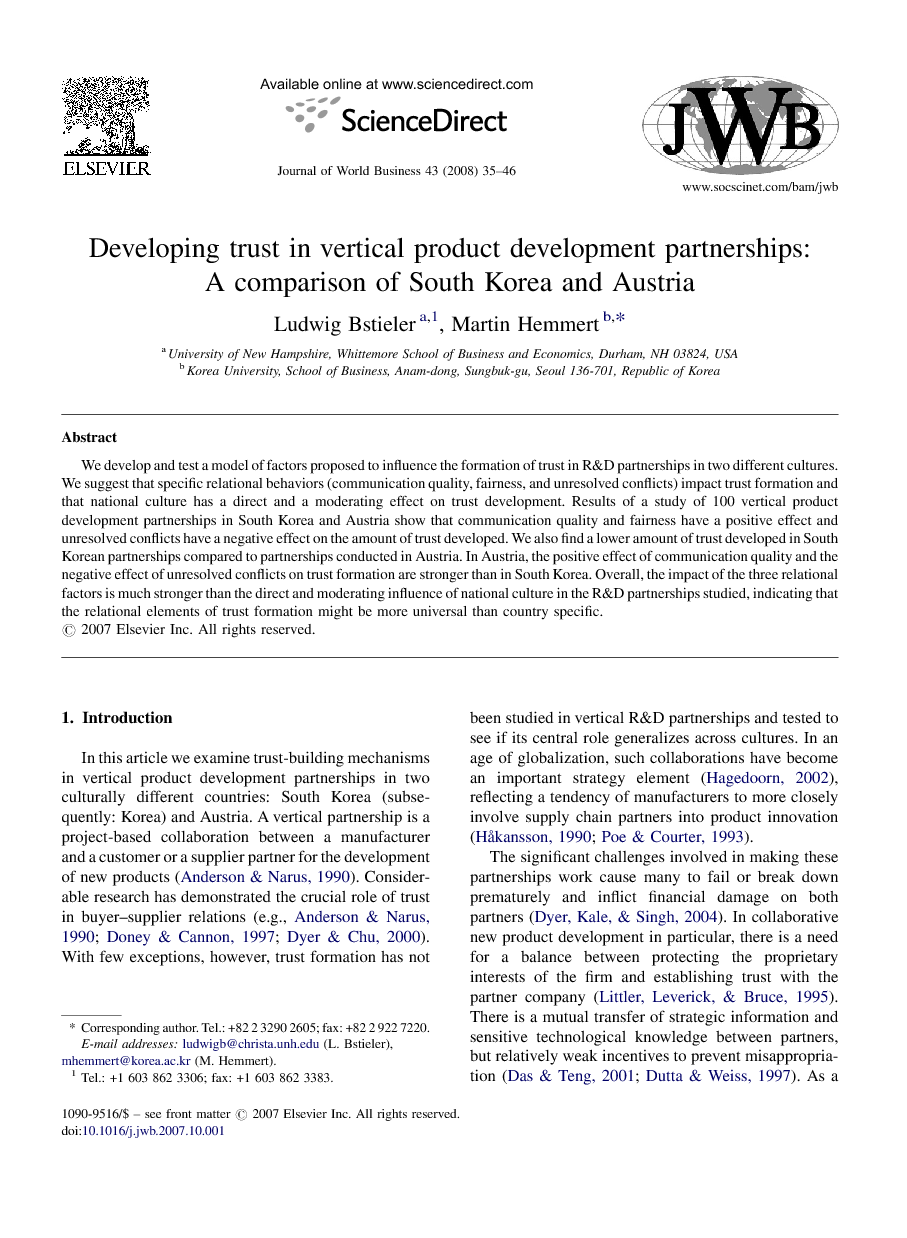 We develop and test a model of factors proposed to influence the formation of trust in R&D partnerships in two different cultures. We suggest that specific relational behaviors (communication quality, fairness, and unresolved conflicts) impact trust formation and that national culture has a direct and a moderating effect on trust development. Results of a study of 100 vertical product development partnerships in South Korea and Austria show that communication quality and fairness have a positive effect and unresolved conflicts have a negative effect on the amount of trust developed. We also find a lower amount of trust developed in South Korean partnerships compared to partnerships conducted in Austria. In Austria, the positive effect of communication quality and the negative effect of unresolved conflicts on trust formation are stronger than in South Korea. Overall, the impact of the three relational factors is much stronger than the direct and moderating influence of national culture in the R&D partnerships studied, indicating that the relational elements of trust formation might be more universal than country specific.

In this article we examine trust-building mechanisms in vertical product development partnerships in two culturally different countries: South Korea (subsequently: Korea) and Austria. A vertical partnership is a project-based collaboration between a manufacturer and a customer or a supplier partner for the development of new products (Anderson & Narus, 1990). Considerable research has demonstrated the crucial role of trust in buyer–supplier relations (e.g., Anderson & Narus, 1990; Doney & Cannon, 1997; Dyer & Chu, 2000). With few exceptions, however, trust formation has not been studied in vertical R&D partnerships and tested to see if its central role generalizes across cultures. In an age of globalization, such collaborations have become an important strategy element (Hagedoorn, 2002), reflecting a tendency of manufacturers to more closely involve supply chain partners into product innovation (Håkansson, 1990; Poe & Courter, 1993). The significant challenges involved in making these partnerships work cause many to fail or break down prematurely and inflict financial damage on both partners (Dyer, Kale, & Singh, 2004). In collaborative new product development in particular, there is a need for a balance between protecting the proprietary interests of the firm and establishing trust with the partner company (Littler, Leverick, & Bruce, 1995). There is a mutual transfer of strategic information and sensitive technological knowledge between partners, but relatively weak incentives to prevent misappropriation (Das & Teng, 2001; Dutta & Weiss, 1997). As a result, vertical collaborative R&D brings with it positive aspects, but also a certain degree of vulnerability to exploitation. This vulnerability makes collaborative development more uncertain and risky than any other buyer–supplier relationship. Contracts usually do not cover every possibility and are unlikely to significantly reduce this vulnerability. Rather, it is the formation of appropriate trust between the partnering entities that will contribute to reducing this transactional uncertainty. For the purpose of this study we adopt the widely accepted definition of trust as a psychological state comprising the intention to accept vulnerability based upon one party's positive expectations of the intentions or behavior of another party in situations that are interdependent or risky (Rousseau, Sitkin, Burt, & Camerer, 1998). Trust development is based on different processes, such as calculative, prediction, intentionality, capability, or transference (Doney, Cannon, & Mullen, 1998). All these processes imply a party's willingness to accept vulnerability based on the expectation that it can rely on the other party (Morgan & Hunt, 1994) to fulfill its obligation. Trust can reduce uncertainty and allow each partner to concentrate on fulfilling its actual task within the collaboration. Because of the people-oriented nature of partnerships, research on buyer–supplier relations suggests that the formation of inter-organizational trust is strongly determined by relational factors (Atuahene-Gima & Li, 2002; Dyer & Chu, 2003). National culture likely will emerge as an important element in how trust is developed within such partnerships. Research on the effect of culture and the behavior of individuals or firms has focused on issues including leadership (House, Hanges, Javidan, Dorfman, & Gupta, 2004); attitudes towards cooperative strategies (Steensma, Marino, & Weaver, 2000); the timing of investment decisions (Li, Lam, & Qian, 2001); or the choice of entry mode (Kogut & Singh, 1988). Yet, the impact of national culture on inter-organizational trust formation in R&D partnerships largely remains unexplored. National culture may directly determine the inclination to trust a partner. Because of cultural features, such as how individuals are socialized, the achievable level of trust in inter-organizational relations may vary between countries (Dyer & Chu, 2003; Fukuyama, 1995; Huff & Kelley, 2003). In addition, cultural differences may influence how inter-organizational trust processes evolve and support or harm those processes (Doney et al., 1998). This proposition, however, has not yet been empirically tested and appears to be an open area of research and analysis. This study is an attempt to integrate research on inter-organizational trust formation and the role national culture plays in this process. We test a model of how certain relational elements, including communication quality, fairness, unresolved conflicts, and national culture affect the development of trust in two different cultures. We expect to contribute to the literature: (1) by assessing the relative importance of national culture as compared to relational factors for trust formation in R&D partnerships; (2) by examining the direct and moderating effects of national culture on trust; (3) by contrasting how trust evolves in European and East Asian new product development partnerships.

Often cross-country comparisons start with a presumption that differences are to be expected and that similarities will be the surprise. This tendency may be related to the fact that in most cross-cultural research significant differences between countries were observed (Cheng, 1994). It may also result from a bias regarding the concept that differences are easier to perceive than are more subtle similarities (Farley & Lehmann, 1994). In many cases, organizations may find themselves in unique circumstances according to their institutional context that may cause them to respond differently to similar situations. As a result, differences in organizational and professional cultures between alliance partners may be more disruptive for alliance processes or performance than differences in national culture (Sirmon & Lane, 2004). The findings of this study on trust formation in R&D partnerships in two supposedly very different cultures suggest that inter-cultural differences do exercise some effects, but only play a modest role for the overall trust development process when compared with such factors as communication quality, fairness, or unresolved conflicts. In this sense, our findings are consistent with the results of other cross-cultural research, which identified factors that appear to strongly influence the behavior of managers and firms, regardless of their national culture (House et al., 2004). First, the results support the notion that the quality of communication between partners and the perception of fairness generally contribute to a high degree to trust formation within a partnership. It appears to be difficult to achieve high levels of trust without steady and intense communication between the partners or when one partner gains the perception that it is not being fairly treated. Moreover, unresolved conflicts between partners hamper the development of trust. In those partnerships that experienced a high degree of volatility or came close to being terminated at one time, only a low amount of trust could be developed. These effects were observed to a similar extent in both countries. Second, national culture affects trust formation. A high level of trust in R&D partnerships is more difficult to develop in Korea than in Austria. The finding that trust is harder to achieve in Korea supports the notion by Fukuyama (1995) that the level of inter-organizational trust that can be developed differs between cultures and countries. However, this effect was relatively weak when compared with the importance of communication quality, fairness, and unresolved conflicts to trust formation, suggesting that even in ‘low-trust’ cultures, it is by no means impossible to achieve a high level of trust in relationships with external partners. Third, our findings indicate that national culture also exhibits a moderating effect on trust formation. The effects observed were partially different compared to what was predicted. Communication quality was more important for trust formation in Austria than in Korea, suggesting that indeed less communication is needed for trust formation in East Asian high-context cultures than in Western low-context cultures. The negative relation of unresolved conflicts with trust formation was significantly stronger in Austria than in Korea, running counter to what was expected. The relatively weaker relationship between unresolved conflicts and trust in Korea could have its roots in the effects of the political, economic, and social disruptions the country has experienced over the last 50 years (Chang, 2003). During that time, the business environment in Korea has been unstable amid various political and economic upheavals, resulting in frequent reorganizations and bankruptcies of firms or whole business groups. Austria, in contrast, has entered a period of stability and prosperity over the last 50 years, after having experienced two World Wars and a lot of unrest in the first half of the 20th century. In Korea, however, major political and economic disruptions continued during the last decades and have occurred as recently as in the late 1990s when the country went through a deep economic crisis. As a consequence, Korean managers may have become accustomed to and more tolerant of conflict in their business relations despite a strong cultural tradition that stresses harmony. Alternatively, disagreements and conflicts may have been task-related, as compared to involving strong personal elements, and thus are easier to resolve (Amason, 1996). The unexpected finding regarding the relation of unresolved conflicts with trust formation across cultures indicates that some of the general observation patterns of national cultures may be insufficient to explain the moderating effects of cross-cultural differences in the specific context of vertical partnerships. Interestingly, a recent study investigating the effect of national culture on the relationship between efficacy and work attitudes also reported results, which were partially reverse to expectations (Luthans, Zhu, & Avolio, 2006). Thus, it appears that further conceptual elaborations regarding precise differences between national cultures and the implications of those differences for business relationships are needed. For instance, when comparing particular countries, a review of the specific historical and institutional contexts in these countries could potentially improve the understanding of cross-cultural differences between them.