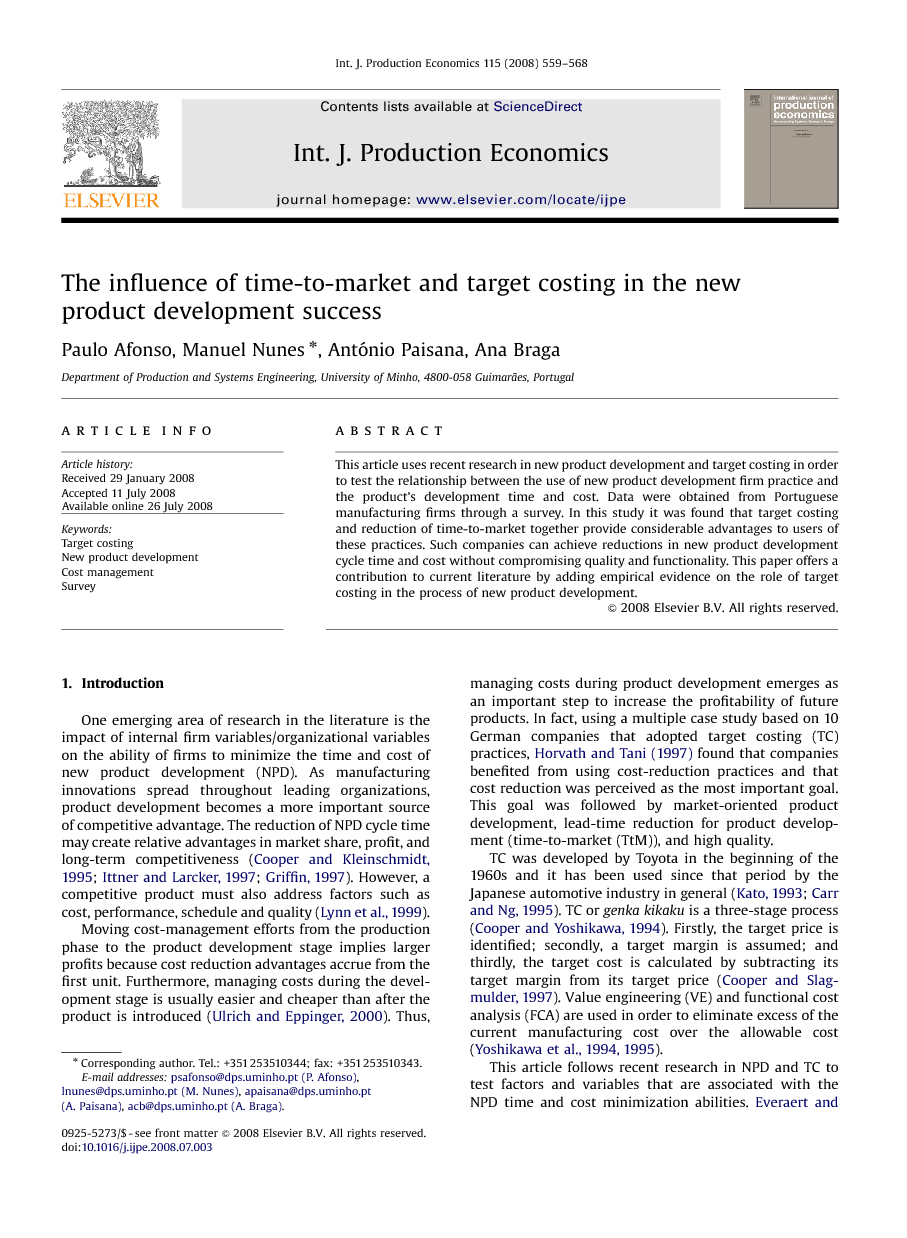 One emerging area of research in the literature is the impact of internal firm variables/organizational variables on the ability of firms to minimize the time and cost of new product development (NPD). As manufacturing innovations spread throughout leading organizations, product development becomes a more important source of competitive advantage. The reduction of NPD cycle time may create relative advantages in market share, profit, and long-term competitiveness (Cooper and Kleinschmidt, 1995; Ittner and Larcker, 1997; Griffin, 1997). However, a competitive product must also address factors such as cost, performance, schedule and quality (Lynn et al., 1999). Moving cost-management efforts from the production phase to the product development stage implies larger profits because cost reduction advantages accrue from the first unit. Furthermore, managing costs during the development stage is usually easier and cheaper than after the product is introduced (Ulrich and Eppinger, 2000). Thus, managing costs during product development emerges as an important step to increase the profitability of future products. In fact, using a multiple case study based on 10 German companies that adopted target costing (TC) practices, Horvath and Tani (1997) found that companies benefited from using cost-reduction practices and that cost reduction was perceived as the most important goal. This goal was followed by market-oriented product development, lead-time reduction for product development (time-to-market (TtM)), and high quality. TC was developed by Toyota in the beginning of the 1960s and it has been used since that period by the Japanese automotive industry in general (Kato, 1993; Carr and Ng, 1995). TC or genka kikaku is a three-stage process (Cooper and Yoshikawa, 1994). Firstly, the target price is identified; secondly, a target margin is assumed; and thirdly, the target cost is calculated by subtracting its target margin from its target price (Cooper and Slagmulder, 1997). Value engineering (VE) and functional cost analysis (FCA) are used in order to eliminate excess of the current manufacturing cost over the allowable cost ( Yoshikawa et al., 1994 and Yoshikawa et al., 1995). This article follows recent research in NPD and TC to test factors and variables that are associated with the NPD time and cost minimization abilities. Everaert and Bruggeman (2002) investigated the impact of using cost targets during NPD, in terms of design quality, product cost, and development time. Sánchez and Pérez (2003) analysed the relationship between the use of some practices at the level of the firm on the ability to reduce NPD time and cost in the Spanish Automotive Industry. On the other hand, Davila and Wouters (2004) identified alternative practices to TC during product development projects. Drawing upon empirical evidence relating to the use of these practices in Portuguese manufacturing SMEs, this work tests the relationship between the use of NPD and the product's development time and cost. Data were obtained from Portuguese manufacturing firms through a survey. The questionnaire was designed to illustrate the role of TC and TtM within NPD in such firms. This paper is structured as follows. Section 2 presents the literature review on NPD, TtM, and TC. Section 3 explains the research methodology used and the results of the survey are shown and discussed in Section 4. Section 5 highlights the main conclusions achieved in this research and presents opportunities for further research on this topic.

In this study it was found that both TC and TtM are correlated to NPD success. Thus, TC and reduction of TtM together provide considerable advantages to users of these practices. Those companies which can manage both are able to achieve reduced NPD cycle time and cost without having to compromise on quality and functionality. As a result they will gain market share and experience economic success. The results obtained in this research are in line with Everaert and Bruggeman's (2002) work. These authors also found that target costs permitted the development of lower-cost new products without compromising quality and time. In fact, TC and product development literature has been suggesting that cost, quality and development time must be analysed together. Cooper and Kleinschmidt (1995) even agree that the combination of cost, quality and reduced TtM determine the success of new products. However, there is still little empirical evidence of such relationship in the literature. However, TtM is not significantly correlated with TC, which means that TtM can be influenced also by other types of practices or techniques. This statement finds some support in Cooper (1996) and corroborates Davila and Wouters's (2004) claim for the relevancy of other non-TC techniques within NPD. In fact, this research offers empirical evidence on the importance of TC in NPD, but findings also suggest that success may depend on other techniques and practices that go beyond TC. Results proved that TtM and TC are relevant to enhance NPD success but they also suggested that TtM and TC are much more complex phenomena than it has been presented in the literature. Companies can apply TC techniques from different perspectives, for different objectives and under different constraints. Dekker and Smidt (2003) stated that TC involves several procedures at two different levels. Initially, product designers are pushed to reduce product costs and afterward a “component-level TC” concept is passed on to suppliers. In this context, suppliers are expected to offer components that fit the established target price as well as the required quality and functionality. The results obtained in this research project have shown that the contribution of TC to NPD may differ according to whether it is applied by companies which are suppliers in a supply chain or they sell directly to the customer. The use of TC can be a distinctive strategic option or it can be simply an imposition from the buyer. In fact, in some cases, the use of specific TC techniques can be forced by the characteristics of the product or the nature of the industry and do not represent any competitive advantage. All these aspects deserve additional and further research. Following previous survey-based research (e.g. Tani et al., 1994; Dekker and Smidt, 2003; Sánchez and Pérez, 2003), this paper contributes to the literature by adding empirical evidence on the role of TC within NPD. On the other hand, it complements previous contributions mainly based on anecdotes and case studies (e.g. Yoshikawa et al., 1994 and Yoshikawa et al., 1995; Cooper, 1996; Cooper and Slagmulder, 1999; Ibusuki and Kaminski, 2007) and experiments (e.g. Everaert and Bruggeman, 2002). The article also poses additional questions to be developed in further research and it suggests managerial implications of TC and TtM in NPD.