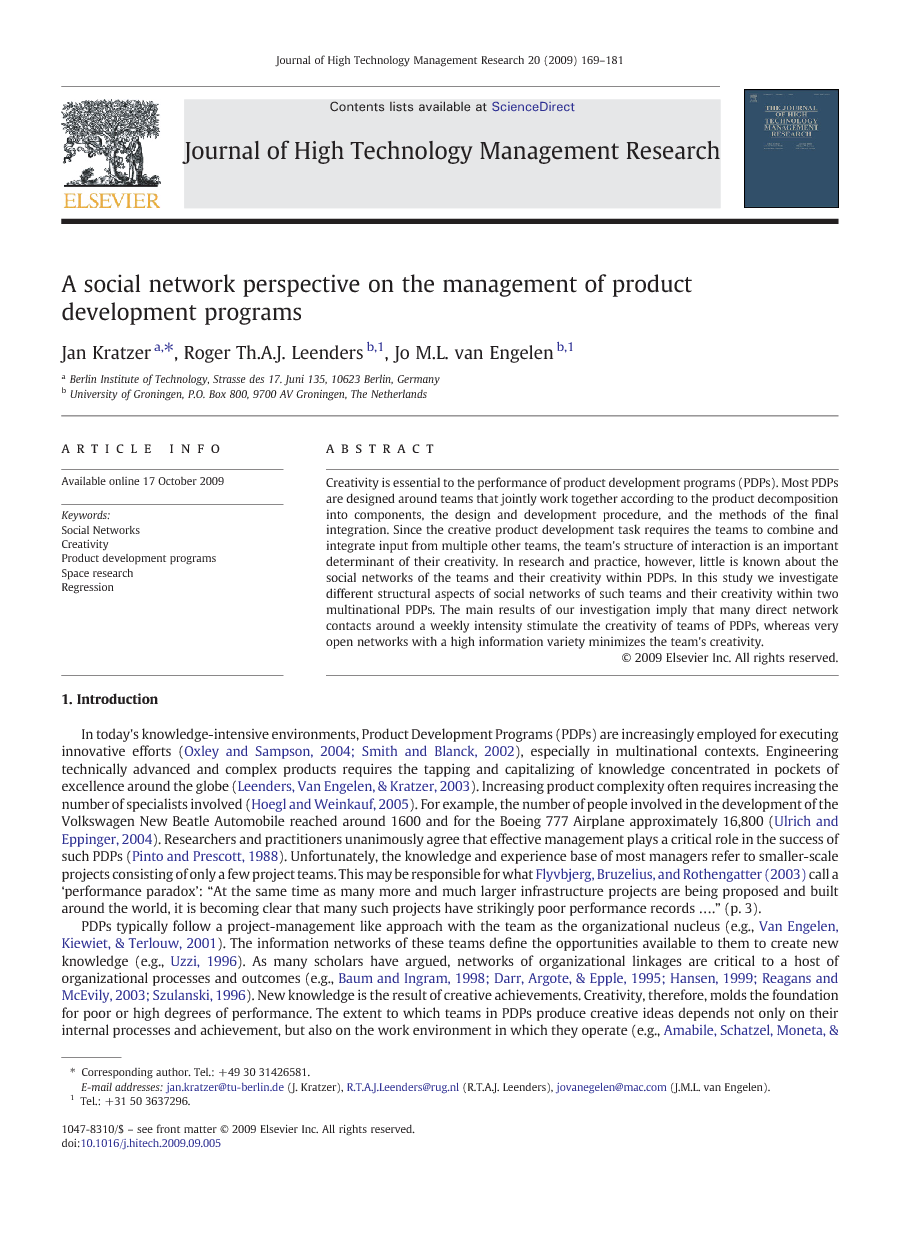 Creativity is essential to the performance of product development programs (PDPs). Most PDPs are designed around teams that jointly work together according to the product decomposition into components, the design and development procedure, and the methods of the final integration. Since the creative product development task requires the teams to combine and integrate input from multiple other teams, the team's structure of interaction is an important determinant of their creativity. In research and practice, however, little is known about the social networks of the teams and their creativity within PDPs. In this study we investigate different structural aspects of social networks of such teams and their creativity within two multinational PDPs. The main results of our investigation imply that many direct network contacts around a weekly intensity stimulate the creativity of teams of PDPs, whereas very open networks with a high information variety minimizes the team's creativity.

In today's knowledge-intensive environments, Product Development Programs (PDPs) are increasingly employed for executing innovative efforts (Oxley and Sampson, 2004 and Smith and Blanck, 2002), especially in multinational contexts. Engineering technically advanced and complex products requires the tapping and capitalizing of knowledge concentrated in pockets of excellence around the globe (Leenders, Van Engelen, & Kratzer, 2003). Increasing product complexity often requires increasing the number of specialists involved (Hoegl and Weinkauf, 2005). For example, the number of people involved in the development of the Volkswagen New Beatle Automobile reached around 1600 and for the Boeing 777 Airplane approximately 16,800 (Ulrich and Eppinger, 2004). Researchers and practitioners unanimously agree that effective management plays a critical role in the success of such PDPs (Pinto and Prescott, 1988). Unfortunately, the knowledge and experience base of most managers refer to smaller-scale projects consisting of only a few project teams. This may be responsible for what Flyvbjerg, Bruzelius, and Rothengatter (2003) call a ‘performance paradox’: “At the same time as many more and much larger infrastructure projects are being proposed and built around the world, it is becoming clear that many such projects have strikingly poor performance records ….” (p. 3). PDPs typically follow a project-management like approach with the team as the organizational nucleus (e.g., Van Engelen, Kiewiet, & Terlouw, 2001). The information networks of these teams define the opportunities available to them to create new knowledge (e.g., Uzzi, 1996). As many scholars have argued, networks of organizational linkages are critical to a host of organizational processes and outcomes (e.g., Baum and Ingram, 1998, Darr et al., 1995, Hansen, 1999, Reagans and McEvily, 2003 and Szulanski, 1996). New knowledge is the result of creative achievements. Creativity, therefore, molds the foundation for poor or high degrees of performance. The extent to which teams in PDPs produce creative ideas depends not only on their internal processes and achievement, but also on the work environment in which they operate (e.g., Amabile et al., 2004, Perry-Smith and Shalley, 2003 and Reiter-Palmon and Illies, 2004). Since new knowledge is mainly created when existing bases of information are disseminated through interaction between interacting teams with varying areas of expertise, creativity is couched in interaction networks (e.g., Leenders et al., 2003, Hansen, 1999, Ingram and Robert, 2000, Reagans and Zuckerman, 2001, Tsai, 2001 and Uzzi, 1996). There are many views of creativity. Amabile (1983) argues that creativity is exhibited when a product or service is generated that is both novel and useful with respect to the firm. Woodman, Sawyer, and Griffin (1993) contend that creativity refers to the creation of a valuable, useful new product, service, idea, procedure, or process by individuals working together in a complex social system. In the present research, we build on the definitions of Amabile, 1983 and Woodman et al., 1993 and extend them with the very nature of the design process itself, with the number and the considered design solutions as a precondition for novel, valuable, and useful ideas (Pahl and Beitz, 1992). In order to investigate exactly how the creative performance of teams inside PDPs depends on their embeddedness in interaction structure, we collected data on two PDPs in the space industry. The first (PDP A) consists of 27 teams scattered around the globe in seventeen countries. The second (PDP B) encompasses 23 teams across five countries. In the first part of the paper we discuss the networks of teams and review the existing literature on the topic. We then formulate propositions about the relationship between the networks of the teams and team creativity. In the second part of the paper we present our case study and perform explorative empirical analyses. Finally we discuss the results and draw both academic and practical conclusions. Teams require information and knowledge as input and produce (different) information and knowledge as output. Our study looks at different structural features as potential vehicles of team creativity. In this way the study does not focus on the internal consistency of teams, but rather on a consistent set of network structures that emerge in interaction between a set of teams. In the literature it is well-documented that different network structures may serve different goals. As little is known about the network factors that determine new product team creativity, this study supplements both the NPD and creativity literatures and broadens the base of systematic research and empirical data (e.g., Gruen, 2004).

This exploratory empirical study shows that the interaction networks of the teams of these two PDPs matter. This result can stand as the main conclusion. These findings allow drawing two additional conclusions. First, the network structure of teams within PDPs is an important issue to consider when designing organizational structure. The PDP teams can be as creative as their social networks allow for. Second, Social Network Analysis (SNA) is a powerful tool in explaining the interactions maintained by teams and team creativity. This method could be considered as a general managerial tool to design, monitor, and navigate the way in which organizational teams work together. Since our study has its restrictions, research should continue investigating the addressed issue using a larger dataset with more teams and more PDPs. We investigated two PDPs in the same (space) industry, the results may well be different in other industries. Future research would be useful on comparing network effects across different industries. The restricted number of cases also limits the generalizability of our results. Although theoretical arguments support the causal direction of the effects tested in this research, an empirical analysis of causality requires longitudinal data. Therefore we suggest future research to employ longitudinal data. Finally, since the teams in our study were members of similar programs it is difficult to generalize the findings to other settings. Still, we can make some informed attempt. As mentioned before, the teams all were part of a highly complex, specialized, deeply specified, knowledge-intensive programs in which the overall task was strongly decomposed. The empirical findings are in concert with this nature of these programs. It is therefore reasonable to expect that other PDPs with similar characteristics may well experience similar effects of team networks on team level creativity. In addition to these characteristics, the teams also had a fair amount of autonomy in the execution of their task. To be sure, there was latitude to change specifications, not even in a minor way—and there certainly were interfaces between several of the teams. But the fact that the overall task was so strongly decomposed, in a way that minimized interfaces, and the fact that the subtasks that followed from the decomposition was each assigned to a single team resulted in a surprisingly high level of loose coupling. Within the confines of their specifications, teams generally did not have to consult or coordinate much with other teams and could focus on their individual task. The fact that teams were part of one PDP did make it easier for them to approach other teams for relevant knowledge or information. In a sense, the two PDPs can be seen as communities of practice. Looking at the teams from this point of view makes it entirely plausible to expect similar results for other teams that are engaged in community of practice-like settings. This setting is quite common in product development programs.