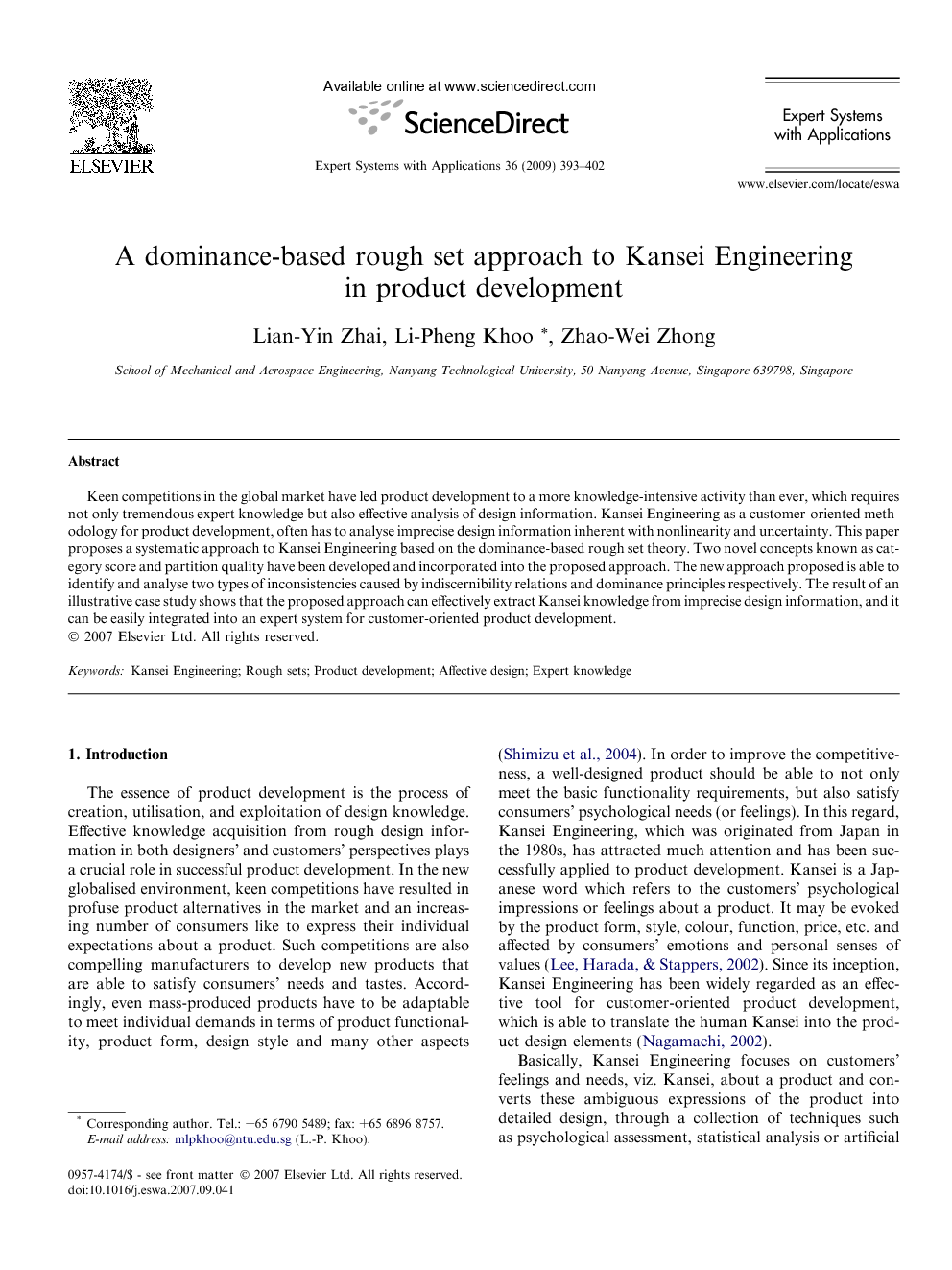 Keen competitions in the global market have led product development to a more knowledge-intensive activity than ever, which requires not only tremendous expert knowledge but also effective analysis of design information. Kansei Engineering as a customer-oriented methodology for product development, often has to analyse imprecise design information inherent with nonlinearity and uncertainty. This paper proposes a systematic approach to Kansei Engineering based on the dominance-based rough set theory. Two novel concepts known as category score and partition quality have been developed and incorporated into the proposed approach. The new approach proposed is able to identify and analyse two types of inconsistencies caused by indiscernibility relations and dominance principles respectively. The result of an illustrative case study shows that the proposed approach can effectively extract Kansei knowledge from imprecise design information, and it can be easily integrated into an expert system for customer-oriented product development.

Kansei Engineering data analysis conventionally relies on statistical tools which assume that Kansei data possess linear characteristics. The nonlinearity and uncertainty inherent in the Kansei data have encouraged much research efforts to be put on the development of new tools for Kansei Engineering analysis. This paper proposed a dominance-based rough set approach to analyse Kansei data in product development. Two novel concepts, namely category score and partition quality, are proposed and incorporated into the dominance-based rough sets for Kansei Engineering analysis. The proposed approach is able to detect and handle two types of inconsistencies inherent in the Kansei data, which are caused by indiscernibility relations (known as Type I inconsistency) and dominance relations (known as Type II inconsistency), respectively. An illustrative case study is used to demonstrate the capability of the proposed approach. The result shows that the best compositions and respective category values of design elements that maximise customer satisfactions to specific Kansei requirements can be easily identified. Furthermore, the granularity roughness of the knowledge extracted from the imprecise Kansei data is evaluated by the quality of partitions associated with respective partition unions. The Kansei knowledge established can be used to advise designers on the modification and improvement of the product design in order to achieve the target Kansei requirements, which can also facilitate the establishment of an expert system for customer-oriented product development. It should be noted that although the case study used in this paper is simple for the sake of clarity in illustration, the novel approach proposed can be easily generalised to more complex context which involves multi-category design elements and more customer evaluations.