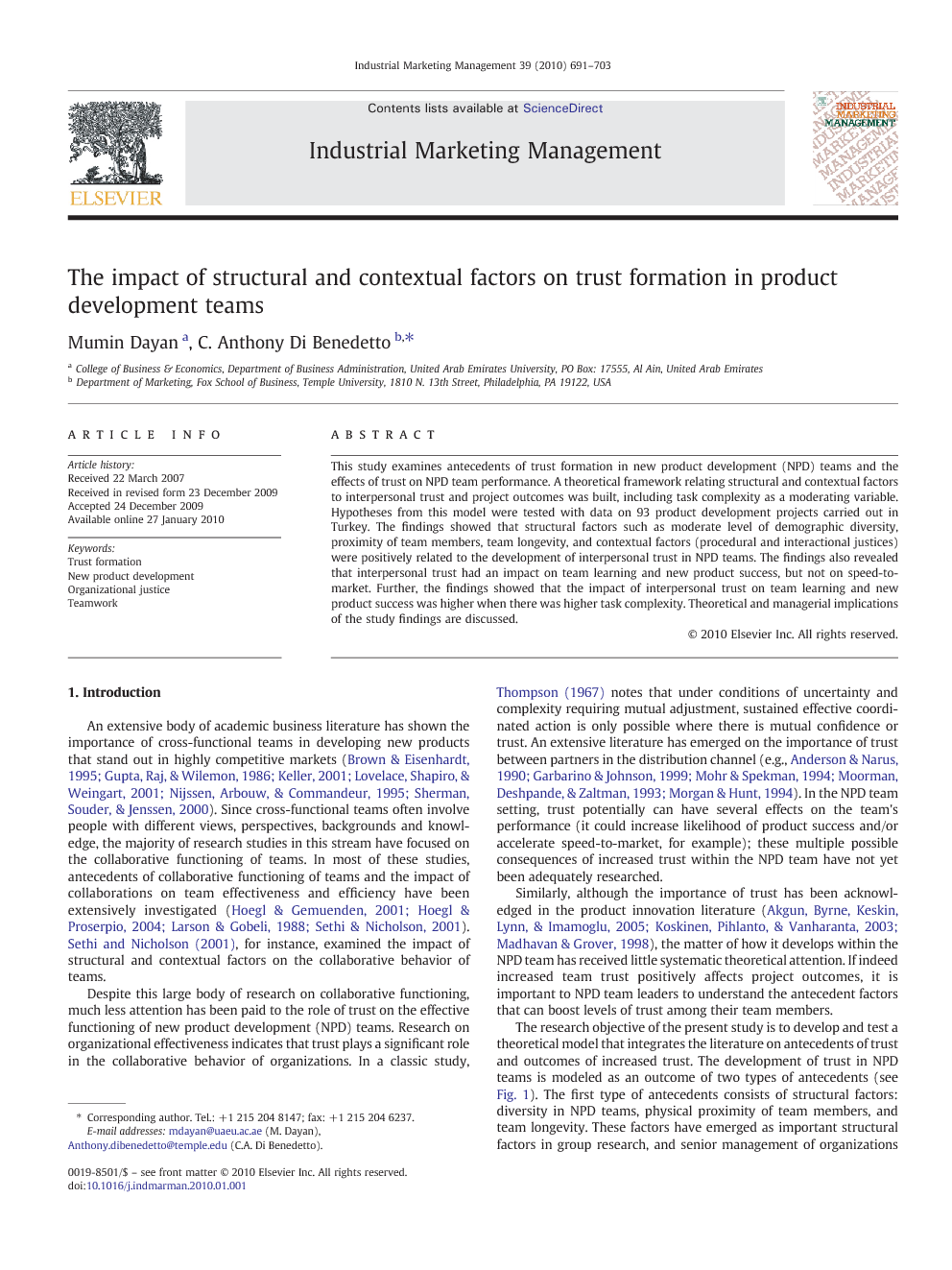 This study examines antecedents of trust formation in new product development (NPD) teams and the effects of trust on NPD team performance. A theoretical framework relating structural and contextual factors to interpersonal trust and project outcomes was built, including task complexity as a moderating variable. Hypotheses from this model were tested with data on 93 product development projects carried out in Turkey. The findings showed that structural factors such as moderate level of demographic diversity, proximity of team members, team longevity, and contextual factors (procedural and interactional justices) were positively related to the development of interpersonal trust in NPD teams. The findings also revealed that interpersonal trust had an impact on team learning and new product success, but not on speed-to-market. Further, the findings showed that the impact of interpersonal trust on team learning and new product success was higher when there was higher task complexity. Theoretical and managerial implications of the study findings are discussed.

An extensive body of academic business literature has shown the importance of cross-functional teams in developing new products that stand out in highly competitive markets (Brown and Eisenhardt, 1995, Gupta et al., 1986, Keller, 2001, Lovelace et al., 2001, Nijssen et al., 1995 and Sherman et al., 2000). Since cross-functional teams often involve people with different views, perspectives, backgrounds and knowledge, the majority of research studies in this stream have focused on the collaborative functioning of teams. In most of these studies, antecedents of collaborative functioning of teams and the impact of collaborations on team effectiveness and efficiency have been extensively investigated (Hoegl and Gemuenden, 2001, Hoegl and Proserpio, 2004, Larson and Gobeli, 1988 and Sethi and Nicholson, 2001). Sethi and Nicholson (2001), for instance, examined the impact of structural and contextual factors on the collaborative behavior of teams. Despite this large body of research on collaborative functioning, much less attention has been paid to the role of trust on the effective functioning of new product development (NPD) teams. Research on organizational effectiveness indicates that trust plays a significant role in the collaborative behavior of organizations. In a classic study, Thompson (1967) notes that under conditions of uncertainty and complexity requiring mutual adjustment, sustained effective coordinated action is only possible where there is mutual confidence or trust. An extensive literature has emerged on the importance of trust between partners in the distribution channel (e.g., Anderson and Narus, 1990, Garbarino and Johnson, 1999, Mohr and Spekman, 1994, Moorman et al., 1993 and Morgan and Morgan, 1994). In the NPD team setting, trust potentially can have several effects on the team's performance (it could increase likelihood of product success and/or accelerate speed-to-market, for example); these multiple possible consequences of increased trust within the NPD team have not yet been adequately researched. Similarly, although the importance of trust has been acknowledged in the product innovation literature (Akgun et al., 2005, Koskinen et al., 2003 and Madhavan and Grover, 1998), the matter of how it develops within the NPD team has received little systematic theoretical attention. If indeed increased team trust positively affects project outcomes, it is important to NPD team leaders to understand the antecedent factors that can boost levels of trust among their team members. The research objective of the present study is to develop and test a theoretical model that integrates the literature on antecedents of trust and outcomes of increased trust. The development of trust in NPD teams is modeled as an outcome of two types of antecedents (see Fig. 1). The first type of antecedents consists of structural factors: diversity in NPD teams, physical proximity of team members, and team longevity. These factors have emerged as important structural factors in group research, and senior management of organizations has some degree of control over them (Sethi & Nicholson, 2001). Functional and demographic diversity in teams has been considered one of the main factors having a significant impact on team trust and effectiveness (Knouse and Dansby, 1999, Spector and Jones, 2004 and Tolbert et al., 1995). Similarly, physical proximity is known to help team members have a better chance to communicate and coordinate effectively (Khan and McDonough, 1997 and Pinto et al., 1993). Team longevity is also considered as an important factor that helps team members develop a shared history and bond among themselves (Akgun and Lynn, 2002 and Katz, 1982). Beside these structural factors, as indicated in previous research (Brewer and Miller, 1984; Mackie and Goethals, 1987 and Kramer, 1999), contextual factors, such as procedural and interpersonal justice, may also contribute to the development of trust among team members. We argue that honesty, fairness and respectfulness of managers to team members as well as fair procedures would create a climate where interpersonal trust in teams can be fostered. Increased interpersonal trust is anticipated to have a positive effect on multiple project outcomes: it should increase team learning, accelerate speed-to-market, and increase likelihood of product success. Finally, we anticipate that task complexity will have a moderating impact on the effect of trust on team performance. In complex tasks, more cooperation and coordination among team members is required, therefore higher levels of trust may be necessary to achieve greater team success (Akgun et al., 2005). In the next section, we build our theoretical model of the antecedents and consequences of interpersonal trust on the NPD team, including task complexity as a moderator, and develop testable hypotheses. In subsequent sections, we test our hypotheses using a sample of teams from Turkish firms engaged in product innovation. We conclude by deriving theoretical conclusions and implications for managers.