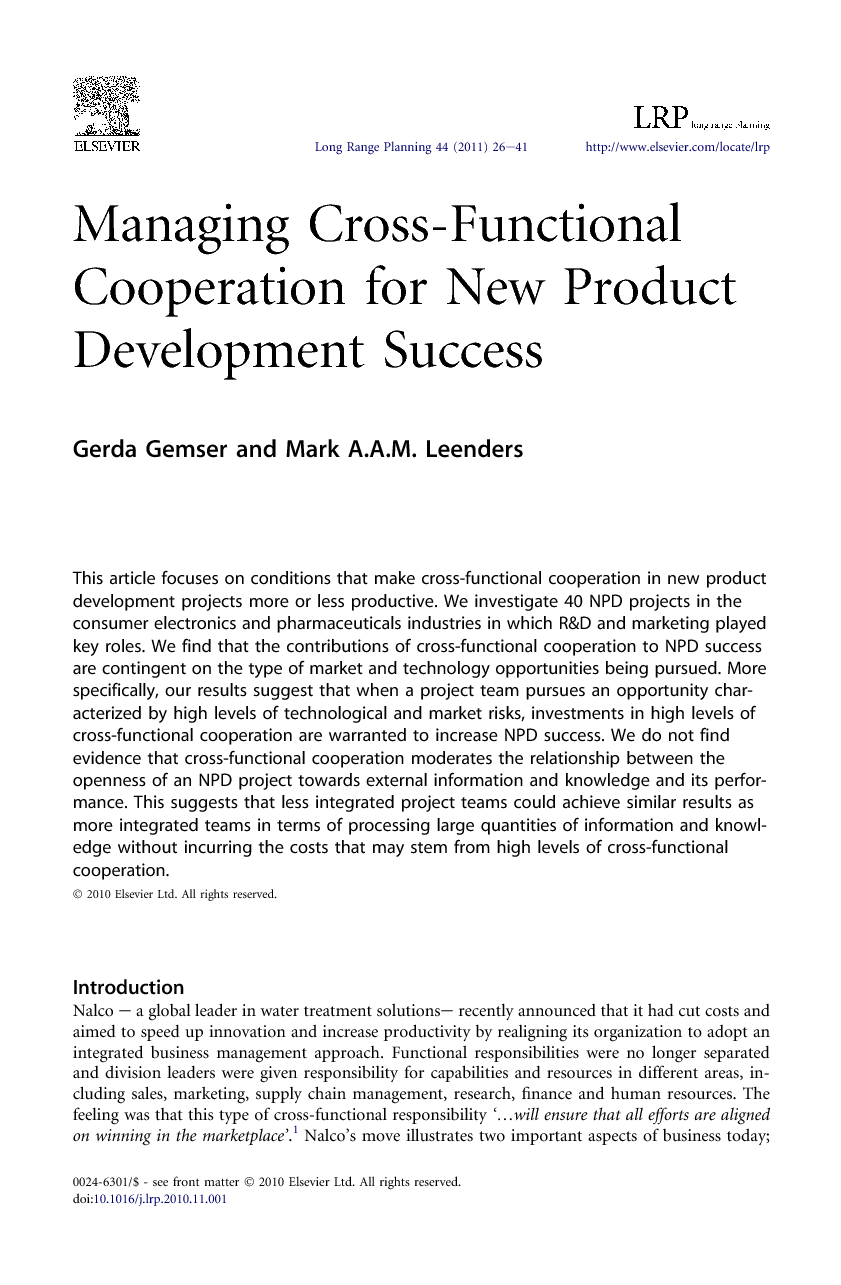 Nalco – a global leader in water treatment solutions– recently announced that it had cut costs and aimed to speed up innovation and increase productivity by realigning its organization to adopt an integrated business management approach. Functional responsibilities were no longer separated and division leaders were given responsibility for capabilities and resources in different areas, including sales, marketing, supply chain management, research, finance and human resources. The feeling was that this type of cross-functional responsibility ‘…will ensure that all efforts are aligned on winning in the marketplace’.1 Nalco’s move illustrates two important aspects of business today; first, it points to the importance of new product development for gaining competitive advantage, and second to the widespread belief in the benefits of cross-functional integration for the success of such initiatives. The extant literature has described the notion of integration between different functional areas to accomplish organizational tasks more efficiently and effectively in different terms, including cross-functional coordination, integration, communication, and cooperation. In this article we use the latter of these - ‘cross-functional cooperation’ - to refer to organizational members of different functional areas who exhibit ‘joint behavior toward some goal of common interest’ – in this case, success in new product development (NPD).3 Consistent with prior research, we operationalize cross-functional cooperation for NPD success in terms of the amount of information and knowledge shared between the functions core to NPD - research, development and marketing - and the ease with which it is shared. We adopt a contingency approach, examining the conditions under which cross-functional integration in NPD projects may be more or less effective and productive, which is important to understand, given that cross-functional cooperation is a resource investment decision. Functional heterogeneity in NPD settings does not in itself promote such desirable outcomes; purposeful managerial actions are generally needed to use it productively. This may take time and resources away from other important tasks at hand, so may in turn hinder performance at some point. In this article we examine in depth whether cross-functional cooperation is particularly effective in the case of NPD projects with high market and technological risks, and where there is considerable openness towards outside information, both of which are recognized as critical factors that can influence NPD success. Existing research suggests that the greater the risk attached to an NPD project, the more likely it is to fail; and that the more open an NPD project team is to external information and knowledge, the more likely the project is to succeed.5 There is, however, little research available that examines how cross-functional cooperation may moderate these relationships. Does it improve the odds of success for high-risk NPD projects, or for those that are open to external information and knowledge? This article takes some steps towards answering these questions. Whereas it seems reasonable to expect that firms will adapt their strategies according to the degree of risk attached to an NPD project or to their openness towards external information, there is also evidence that suggests that, in practice, companies do not balance their level of cross-functional cooperation against the levels of risk or openness in their projects. For example, when companies’ new products suffer high failure rates, there is a natural tendency for them to seek to reduce risk. This may be done first by limiting the pursuit of technologies or market opportunities perceived to be associated with high levels of risk and, second, by increasing the level of cross-functional cooperation in NPD projects. However, using both risk-reduction strategies at the same time can create an undesired spiral where more cross-functional cooperation is used to counter less risk, where a theoretically more effective ‘fit’ would be to reduce cross-functional ties where less risk is present. Understanding the conditions under which cross-functional cooperation may be more or less effective is more likely to be useful to managers than a general insight that cross-functional cooperation is positively related with performance. To examine how cross-functional cooperation may contribute to NPD success, we integrate two different streams of research. The first is research on NPD, which in general points to the benefits of cross-functional cooperation in increasing the pool of available information and knowledge and its more effective and efficient processing. The second research stream, grounded in applied psychology and organizational behavior literature, suggests that functionally diverse teams, as well as having a potentially positive impact, may also be negatively related with performance, due to interpersonal dislikes and relational conflicts, and low levels of group cohesion and identification with and commitment to the team, to name only a few potential problems. The following section provides a brief review of the relevant literature on cross-functional cooperation in NPD and the broader team diversity literature. We develop two hypotheses and test them using data about NPD projects developed in the consumer electronics and pharmaceuticals industries. We then describe our research method and present our findings, and our final section discusses implications for management and makes suggestions for future research.