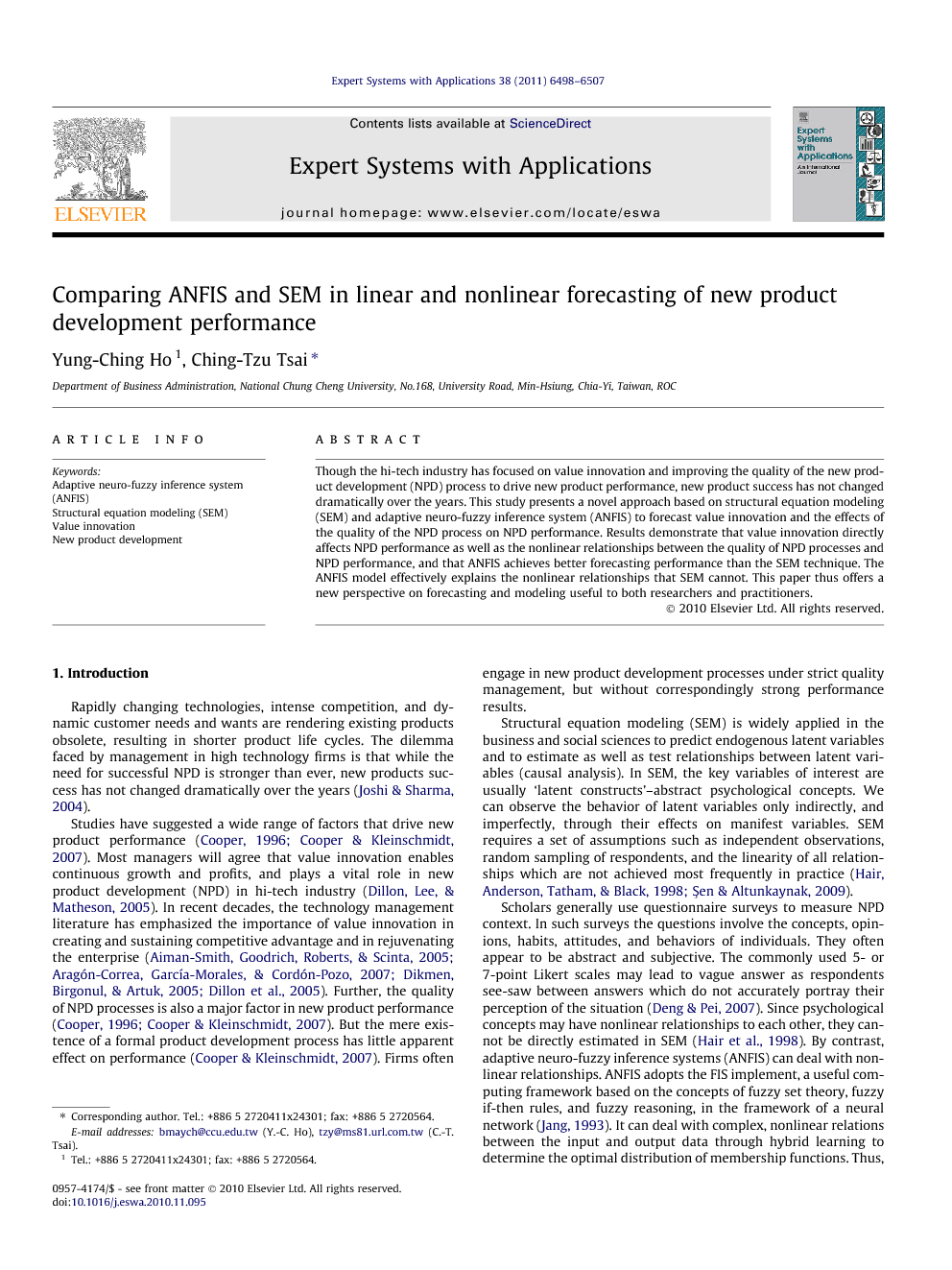 Though the hi-tech industry has focused on value innovation and improving the quality of the new product development (NPD) process to drive new product performance, new product success has not changed dramatically over the years. This study presents a novel approach based on structural equation modeling (SEM) and adaptive neuro-fuzzy inference system (ANFIS) to forecast value innovation and the effects of the quality of the NPD process on NPD performance. Results demonstrate that value innovation directly affects NPD performance as well as the nonlinear relationships between the quality of NPD processes and NPD performance, and that ANFIS achieves better forecasting performance than the SEM technique. The ANFIS model effectively explains the nonlinear relationships that SEM cannot. This paper thus offers a new perspective on forecasting and modeling useful to both researchers and practitioners.

Rapidly changing technologies, intense competition, and dynamic customer needs and wants are rendering existing products obsolete, resulting in shorter product life cycles. The dilemma faced by management in high technology firms is that while the need for successful NPD is stronger than ever, new products success has not changed dramatically over the years (Joshi & Sharma, 2004). Studies have suggested a wide range of factors that drive new product performance (Cooper, 1996 and Cooper and Kleinschmidt, 2007). Most managers will agree that value innovation enables continuous growth and profits, and plays a vital role in new product development (NPD) in hi-tech industry (Dillon, Lee, & Matheson, 2005). In recent decades, the technology management literature has emphasized the importance of value innovation in creating and sustaining competitive advantage and in rejuvenating the enterprise (Aiman-Smith et al., 2005, Aragón-Correa et al., 2007, Dikmen et al., 2005 and Dillon et al., 2005). Further, the quality of NPD processes is also a major factor in new product performance (Cooper, 1996 and Cooper and Kleinschmidt, 2007). But the mere existence of a formal product development process has little apparent effect on performance (Cooper & Kleinschmidt, 2007). Firms often engage in new product development processes under strict quality management, but without correspondingly strong performance results. Structural equation modeling (SEM) is widely applied in the business and social sciences to predict endogenous latent variables and to estimate as well as test relationships between latent variables (causal analysis). In SEM, the key variables of interest are usually ‘latent constructs’--abstract psychological concepts. We can observe the behavior of latent variables only indirectly, and imperfectly, through their effects on manifest variables. SEM requires a set of assumptions such as independent observations, random sampling of respondents, and the linearity of all relationships which are not achieved most frequently in practice (Hair et al., 1998 and Şen and Altunkaynak, 2009). Scholars generally use questionnaire surveys to measure NPD context. In such surveys the questions involve the concepts, opinions, habits, attitudes, and behaviors of individuals. They often appear to be abstract and subjective. The commonly used 5- or 7-point Likert scales may lead to vague answer as respondents see-saw between answers which do not accurately portray their perception of the situation (Deng & Pei, 2007). Since psychological concepts may have nonlinear relationships to each other, they cannot be directly estimated in SEM (Hair et al., 1998). By contrast, adaptive neuro-fuzzy inference systems (ANFIS) can deal with nonlinear relationships. ANFIS adopts the FIS implement, a useful computing framework based on the concepts of fuzzy set theory, fuzzy if-then rules, and fuzzy reasoning, in the framework of a neural network (Jang, 1993). It can deal with complex, nonlinear relations between the input and output data through hybrid learning to determine the optimal distribution of membership functions. Thus, the ANFIS is a very powerful approach for dealing with nonlinear relationships. ANFIS techniques have been successfully applied to many domain problems in recent years (e.g. Azadeh et al., 2009 and Şen and Altunkaynak, 2009). Tortum, Yayla, and Gökdağ (2009) use artificial neural networks (ANN) and ANFIS techniques to test models of intercity freight transport. Akdemir, Kara, Polat, Güven, and Günes (2008) proposed combining principal component analysis (PCA) and ANFIS to diagnose optic nerve disease. Radulović and Ranković (2009) used a feedforward neural network (FNN) and ANFIS to estimate electric and magnetic fields around overhead power transmission lines. Chen, Ying, and Pan (2009) proposed forecasting tourist arrivals using ANFIS. Wua, Hsu, and Chen (2009) used ANN and ANFIS technique for used car price forecasting. Chien, Wangb, and Lin (2009) also used ANN and ANFIS techniques to forecast innovation performance. The research has demonstrated that the ANFIS model offers increased accuracy and reduced forecasting error across a variety of estimate and forecasting situations. Although many studies have compared ANFIS with other techniques, comparative analysis of ANFIS and SEM is rare. To the best of our knowledge, only Kim, Han, Kim, and Park (2009) have used regression, ANN, and SEM, with the results showing that SEM is the most accurate. It is the main purpose of this paper to compare SEM and ANFIS in the forecasting of value innovation models using vague data such as questionnaire surveys, whose questions are sometimes difficult to answer and require a long time to respond. The purpose of this study is to establish a relationship between latent variables with this imprecise survey information. The remainder of this paper is organized as follows. First, Section 2 presents the literature review. Section 3 then describes the conceptual features of the SEM and the ANFIS used in this study. In Section 4, the research methodology is described. Section 5 then presents our empirical analysis using a questionnaire survey and comparative analysis. Finally, Section 6 offers a discussion and conclusions.

This paper uses SEM and ANFIS models to explore forecasting techniques in NPD performance. A comparison of the results from SEM and ANFIS shows the effectiveness of the different forecasting models in this study. The ANFIS model provides better forecasting performance than the SEM. Further, the ANFIS model more effectively depicts and explains the nonlinear relationships between NPD process quality and NPD performance than the SEM model. Tortum et al. (2009) also found that ANFIS models are more successful in the representation of nonlinear behavior. This study found that the quality of NPD processes has a nonlinear effect on NPD performance. The use of SEM to investigate this relationship may thus lead to an incomplete understanding of the NPD process/performance relationship. This indicates that use of SEM in other studies may not be optimal. Future research should expand this comparison to other fields and industries where ANFIS is commonly used to analyze complex relationships. The researchers hope to compare SEM and ANFIS in future studies with other data sets.