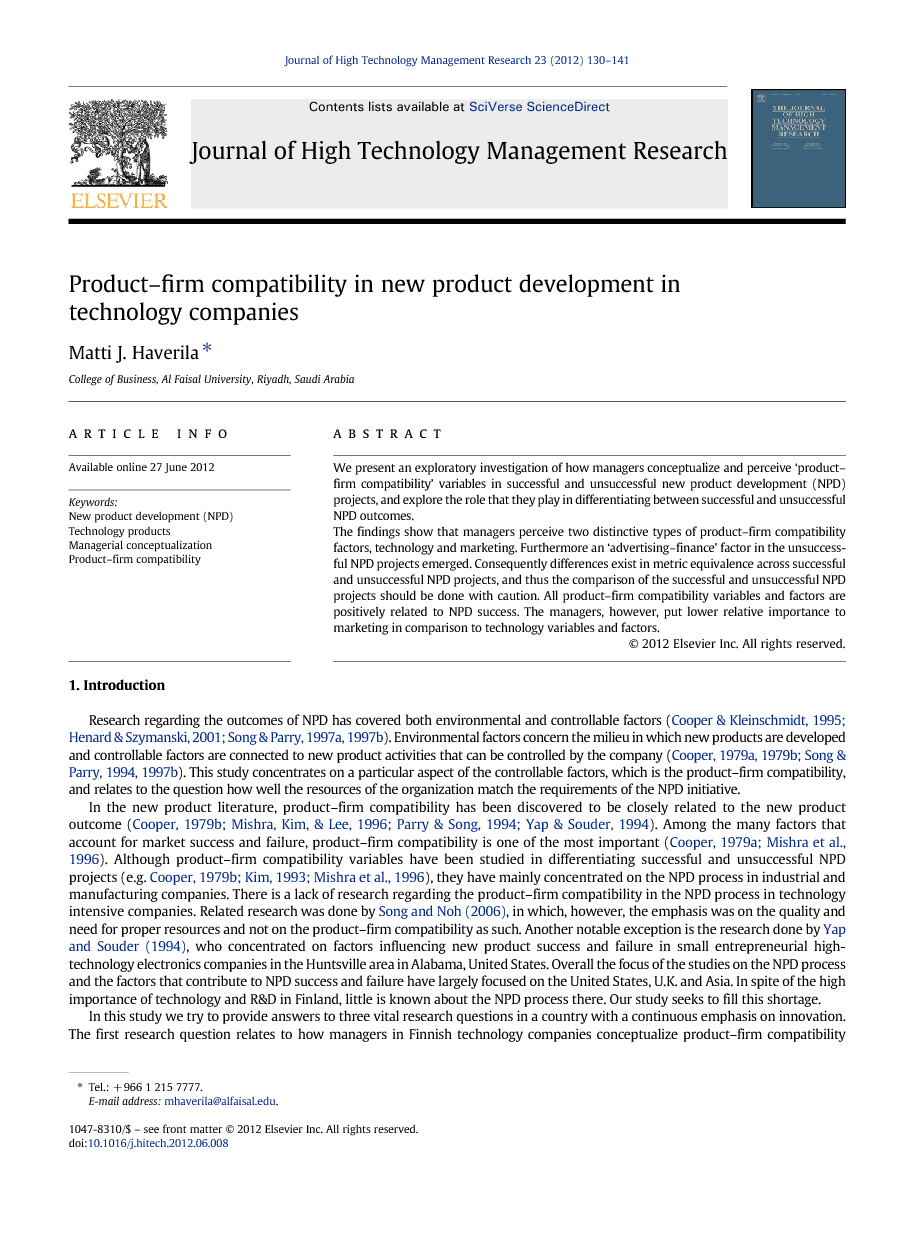 Research regarding the outcomes of NPD has covered both environmental and controllable factors (Cooper and Kleinschmidt, 1995, Henard and Szymanski, 2001, Song and Parry, 1997a and Song and Parry, 1997b). Environmental factors concern the milieu in which new products are developed and controllable factors are connected to new product activities that can be controlled by the company (Cooper, 1979a, Cooper, 1979b, Song and Parry, 1994 and Song and Parry, 1997b). This study concentrates on a particular aspect of the controllable factors, which is the product–firm compatibility, and relates to the question how well the resources of the organization match the requirements of the NPD initiative. In the new product literature, product–firm compatibility has been discovered to be closely related to the new product outcome (Cooper, 1979b, Mishra et al., 1996, Parry and Song, 1994 and Yap and Souder, 1994). Among the many factors that account for market success and failure, product–firm compatibility is one of the most important (Cooper, 1979a and Mishra et al., 1996). Although product–firm compatibility variables have been studied in differentiating successful and unsuccessful NPD projects (e.g. Cooper, 1979b, Kim, 1993 and Mishra et al., 1996), they have mainly concentrated on the NPD process in industrial and manufacturing companies. There is a lack of research regarding the product–firm compatibility in the NPD process in technology intensive companies. Related research was done by Song and Noh (2006), in which, however, the emphasis was on the quality and need for proper resources and not on the product–firm compatibility as such. Another notable exception is the research done by Yap and Souder (1994), who concentrated on factors influencing new product success and failure in small entrepreneurial high-technology electronics companies in the Huntsville area in Alabama, United States. Overall the focus of the studies on the NPD process and the factors that contribute to NPD success and failure have largely focused on the United States, U.K. and Asia. In spite of the high importance of technology and R&D in Finland, little is known about the NPD process there. Our study seeks to fill this shortage. In this study we try to provide answers to three vital research questions in a country with a continuous emphasis on innovation. The first research question relates to how managers in Finnish technology companies conceptualize product–firm compatibility during the NPD process, and the second research question is how product–firm compatibility variables differentiate successful and unsuccessful NPD projects in Finnish technology companies. By studying the dimensionality of product–firm compatibility and confirming metric equivalence between successful and unsuccessful NPD ventures it is possible to carry out a more thorough and valid investigation of the items affecting the success and failure of NPD projects, which is the second research question of this study. The third research question relates to the relationships and relative importance of the variables contributing to the success of the NPD projects. These research questions are essential to consider taking into account the significance being allocated on R&D in the development of new technology in the European Union, and Finland in particular. Technology, and the research and development (R&D) investments on new product development (NPD) have a significant impact on the economic development of the OECD countries (OECD, 2004). Table 1 describes the relative weight and development of the R&D expenditure as a percentage of GDP in various countries (Research.fi, 2010). An interesting discovery from Table 1 is the increasing role of R&D in China. The increasing role of China as an important production and manufacturing location in the world is a known fact, but as can be seen from Table 1 its investments in R&D have been expanding a great deal (UNESCO Institute for Statistics, 2007). This fact (Europa, 2005), the global growth in R&D expenditure (UNESCO Institute for Statistics, 2007) and the current economic challenges put a growing pressure on countries like Finland, which have traditionally placed a lot of emphasis on R&D as a way to vitalize its economy and to introduce new products into the world markets. On the basis of the discussion above it is critical that the R&D process activities are executed competently and as much as possible are understood in relation to the variables and factors present in the NPD process. This research paper is organized as follows. First, we consider relevant literature related to the role of product–firm compatibility variables in the NPD process. Specifically we review the literature related to product–firm compatibility studies, which have empirically examined the relationship between product–firm compatibility and NPD success. Second, we bring forward an empirical study that was done in a technology industry in Finland. Third, we compare the results of this study to the previous studies done. Finally, we present the results and discuss implications for researchers and practitioners.