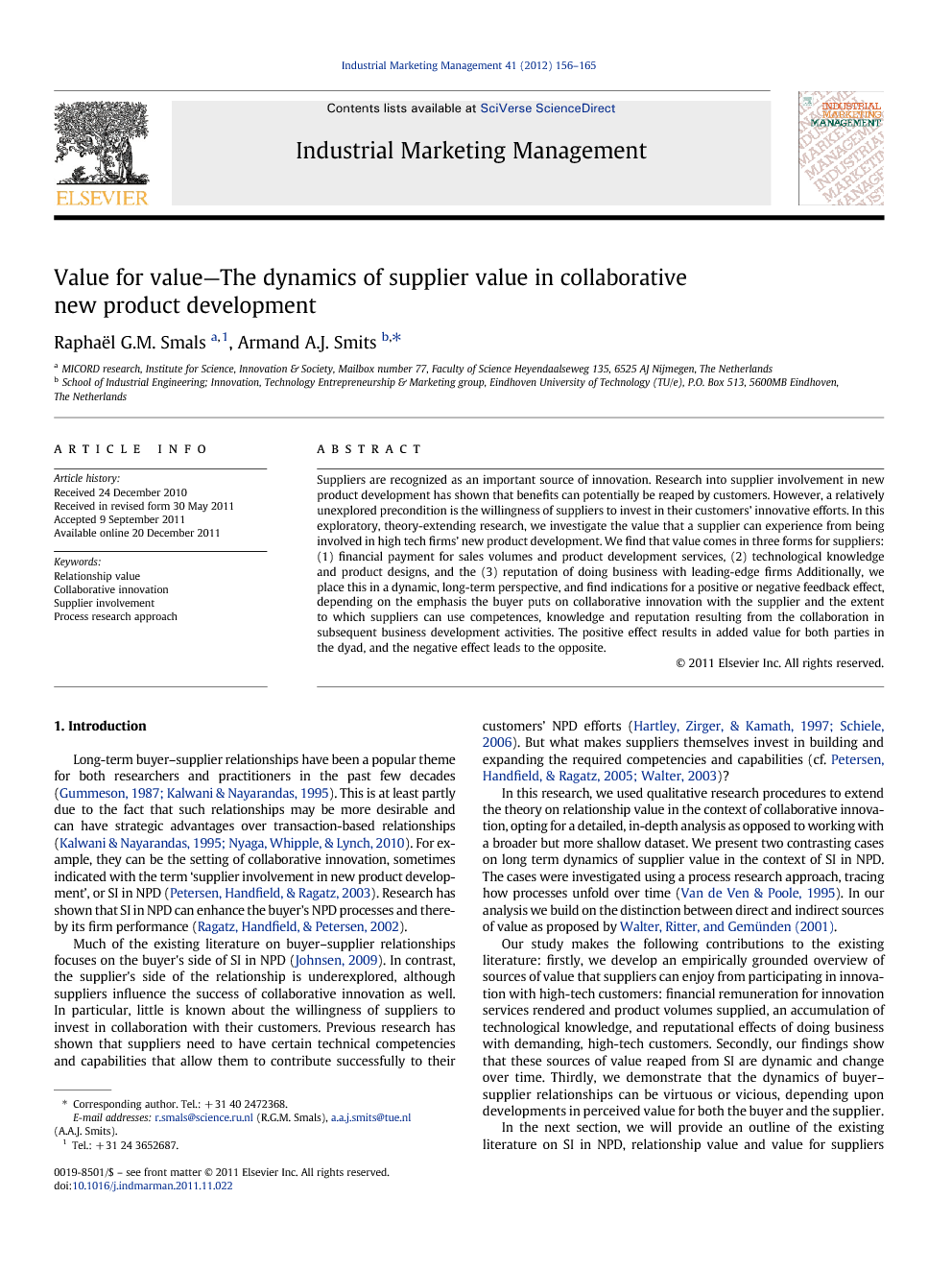 Suppliers are recognized as an important source of innovation. Research into supplier involvement in new product development has shown that benefits can potentially be reaped by customers. However, a relatively unexplored precondition is the willingness of suppliers to invest in their customers’ innovative efforts. In this exploratory, theory-extending research, we investigate the value that a supplier can experience from being involved in high tech firms’ new product development. We find that value comes in three forms for suppliers: (1) financial payment for sales volumes and product development services, (2) technological knowledge and product designs, and the (3) reputation of doing business with leading-edge firms Additionally, we place this in a dynamic, long-term perspective, and find indications for a positive or negative feedback effect, depending on the emphasis the buyer puts on collaborative innovation with the supplier and the extent to which suppliers can use competences, knowledge and reputation resulting from the collaboration in subsequent business development activities. The positive effect results in added value for both parties in the dyad, and the negative effect leads to the opposite.

Long-term buyer–supplier relationships have been a popular theme for both researchers and practitioners in the past few decades (Gummeson, 1987 and Kalwani and Nayarandas, 1995). This is at least partly due to the fact that such relationships may be more desirable and can have strategic advantages over transaction-based relationships (Kalwani and Nayarandas, 1995 and Nyaga et al., 2010). For example, they can be the setting of collaborative innovation, sometimes indicated with the term ‘supplier involvement in new product development’, or SI in NPD (Petersen, Handfield, & Ragatz, 2003). Research has shown that SI in NPD can enhance the buyer's NPD processes and thereby its firm performance (Ragatz, Handfield, & Petersen, 2002). Much of the existing literature on buyer–supplier relationships focuses on the buyer's side of SI in NPD (Johnsen, 2009). In contrast, the supplier's side of the relationship is underexplored, although suppliers influence the success of collaborative innovation as well. In particular, little is known about the willingness of suppliers to invest in collaboration with their customers. Previous research has shown that suppliers need to have certain technical competencies and capabilities that allow them to contribute successfully to their customers’ NPD efforts (Hartley et al., 1997 and Schiele, 2006). But what makes suppliers themselves invest in building and expanding the required competencies and capabilities (cf. Petersen et al., 2005 and Walter, 2003)? In this research, we used qualitative research procedures to extend the theory on relationship value in the context of collaborative innovation, opting for a detailed, in-depth analysis as opposed to working with a broader but more shallow dataset. We present two contrasting cases on long term dynamics of supplier value in the context of SI in NPD. The cases were investigated using a process research approach, tracing how processes unfold over time (Van de Ven & Poole, 1995). In our analysis we build on the distinction between direct and indirect sources of value as proposed by Walter, Ritter, and Gemünden (2001). Our study makes the following contributions to the existing literature: firstly, we develop an empirically grounded overview of sources of value that suppliers can enjoy from participating in innovation with high-tech customers: financial remuneration for innovation services rendered and product volumes supplied, an accumulation of technological knowledge, and reputational effects of doing business with demanding, high-tech customers. Secondly, our findings show that these sources of value reaped from SI are dynamic and change over time. Thirdly, we demonstrate that the dynamics of buyer–supplier relationships can be virtuous or vicious, depending upon developments in perceived value for both the buyer and the supplier. In the next section, we will provide an outline of the existing literature on SI in NPD, relationship value and value for suppliers specifically. Subsequently, we present our research questions. We then elaborate on the methods used for this research as well as its empirical setting, followed by a presentation of our findings and a discussion thereof. We then formulate conclusions and link our research to related studies. Finally we offer some guidelines to practitioners and make suggestions for further research.

In this section, we will present a discussion and offer some conclusions based on our longitudinal study of two high-tech, innovation-oriented buyer–supplier dyads. In our research we have considered the supplier's viewpoint on value, which we have explored through the eyes of customers in a setting of high-tech OEMs. In contrast to the customer's viewpoint, which has gained widespread attention, the perspective of the supplier has been largely neglected by previous literature (Walter et al., 2001). Additionally, while most studies have focused on product/episode value (Ravald & Grönroos, 1996), we have focused on value from a long term perspective. In doing so, we contribute to the growing work that studies the dynamics of value within the relationship, which may be useful in understanding how buyer–supplier relationships develop over time. We have identified three potential sources of value that OEMs offer to their suppliers: (1) financial payment for sales volume and product development services, (2) technological knowledge and product concepts directly related to product designs, and the (3) reputation of doing business with leading-edge firms. Although the first, direct type of value, is the easiest type of value to make tangible for a supplier, the suppliers in our research appear to appreciate indirect value, i.e. the other two types of value, at least as much and perhaps even more, as it provides them with the possibilities for future growth by expanding business with existing customers as well as access new customers and markets. Hence, indirect value seems to be of a strategic importance and offers opportunities for diversification and expansion of the customer portfolio, while direct value mainly defines the attractiveness of the existing customer portfolio. Our research supports the view that innovation-oriented relationships are more than a collection of serialized transactions, requiring commitment of both parties and matching of strategies (Pardo et al., 2006, p.1369). Commitment to the relationship may decline if the value received by the supplier, or arguably by either party, disappears or becomes less relevant (cf. Gassenheimer et al., 1998). Hence, we argue that not only customer satisfaction is a relevant theme in relationship research (Flint, Woodruff, & Gardial, 1997), the same goes for ‘supplier satisfaction’ (Benton and Maloni, 2005 and Essig and Amann, 2009). This is especially true in an environment in which companies have become highly dependent on their suppliers for innovation purposes (Birou and Fawcett, 1994 and Dyer, 1996). In terms of relationship dynamics, this article provides empirical illustrations of possible feedback mechanisms in innovation-oriented buyer–supplier dyads (cf. Schiele et al., 2010). Collaborative innovation may act as a value-creating mechanism for both the buyer and supplier. The supplier can enjoy spin-off effects of innovation-related knowledge and competencies, leading to expansion of the customer portfolio. This in turn may create spin-off effects for the benefit of the buyer in the original dyad. Reduction of collaborative innovation in the focal dyad may bring a halt to the positive feedback system, ultimately reducing the value experienced by both participants in the dyad. Taking a relationship-value perspective could also shed new light on developments in other contexts besides the one studied here. In the automotive industry for instance research has shown that suppliers are more willing to share new technology with Japanese automakers than with their US counterparts (Liker and Choi, 2004 and PPI, 2011). Reasons that have been mentioned are that the Japanese are more proficient in involving their suppliers in innovation activities. Japanese companies also appear to have a deeper understanding of their suppliers’ business environment and are more concerned with their suppliers’ profit opportunities. In terms of value, one could argue that Japanese automakers have a better eye for the direct and indirect value a supplier draws from the relationship. In turn this is awarded by the suppliers’ willingness to share their latest technologies with the buyer.