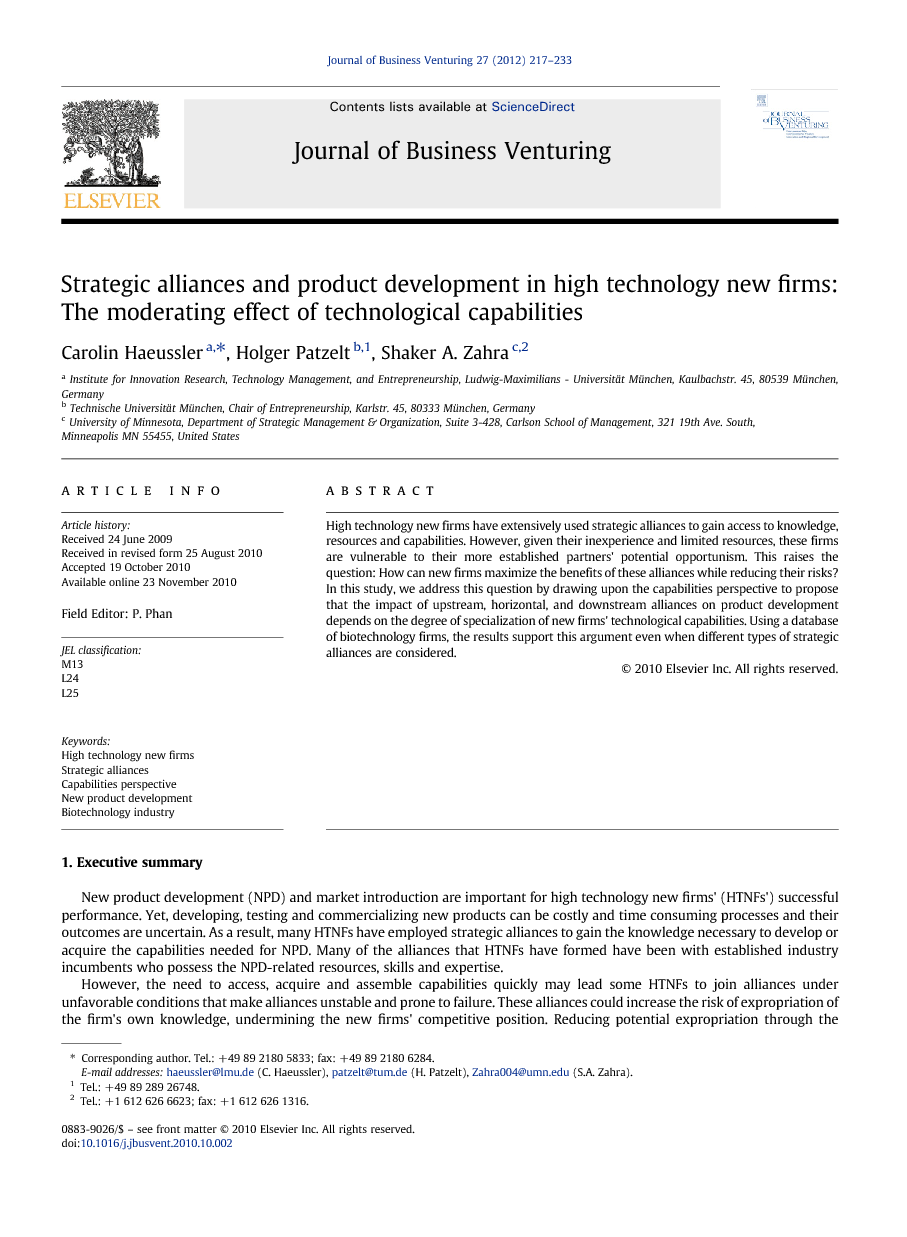 High technology new firms have extensively used strategic alliances to gain access to knowledge, resources and capabilities. However, given their inexperience and limited resources, these firms are vulnerable to their more established partners' potential opportunism. This raises the question: How can new firms maximize the benefits of these alliances while reducing their risks? In this study, we address this question by drawing upon the capabilities perspective to propose that the impact of upstream, horizontal, and downstream alliances on product development depends on the degree of specialization of new firms' technological capabilities. Using a database of biotechnology firms, the results support this argument even when different types of strategic alliances are considered.

New firms in high technology industries have used alliances to gain the knowledge and other resources necessary for successful NPD. Despite their benefits, alliances pose significant risks for HTNFs. This study draws on the capabilities perspective of alliance formation and a survey of 199 biotechnology firms from Germany and the UK to investigate how alliance patterns influence NPD. We find that the specialization of new firms' technological capabilities can help managers use alliances more productively when it comes to NPD. Our results are stable over a variety of different model specifications and when we account for the endogeneity of alliances. The analyses reveal differential effects for upstream, horizontal, and downstream alliances. For those alliances where the acquisition and generation of knowledge is a key goal for HTNFs (i.e., upstream and horizontal), specialized technological capabilities appear to be a prerequisite for developing the absorptive capacity needed to capture and commercially exploit this knowledge. Even if a partner's knowledge is not related to the HTNFs' knowledge domain, its specialized capabilities might be beneficial in using these alliances because they help in gaining a reputation in a particular knowledge domain and as a result better upstream partners. They also protect a firm's knowledge from expropriation by partners in the “co-opetition” scenario of horizontal alliances. When access to capabilities downstream of the value chain is the main driver of alliance formation, a broader set of technological capabilities can increase HTNFs' bargaining power and gains in NPD. The findings help to clarify the role of new firms' technological capabilities in determining the potential benefits and risks associated with strategic alliances especially when it comes to NPD, a source of competitive advantage.