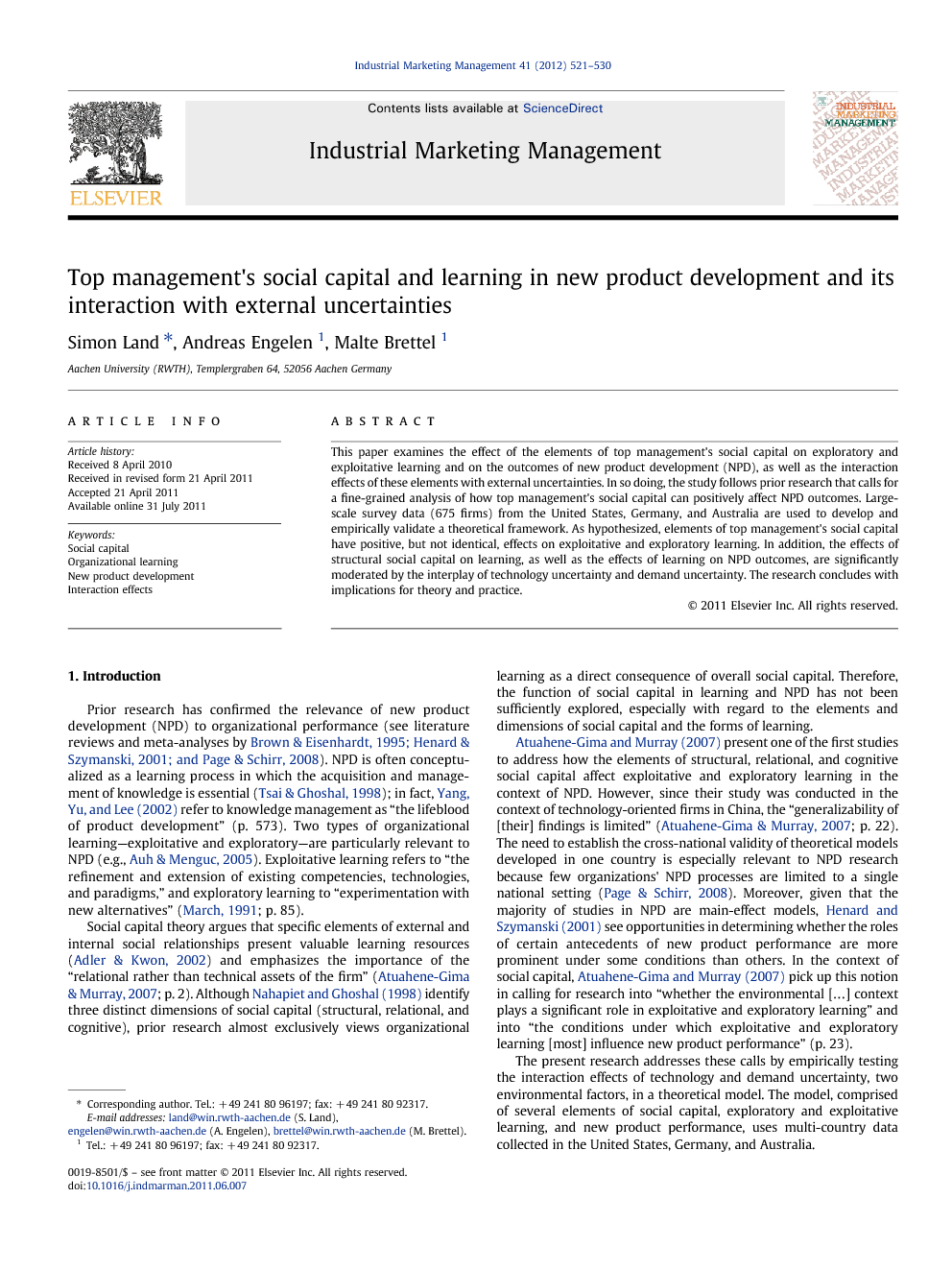 This paper examines the effect of the elements of top management's social capital on exploratory and exploitative learning and on the outcomes of new product development (NPD), as well as the interaction effects of these elements with external uncertainties. In so doing, the study follows prior research that calls for a fine-grained analysis of how top management's social capital can positively affect NPD outcomes. Large-scale survey data (675 firms) from the United States, Germany, and Australia are used to develop and empirically validate a theoretical framework. As hypothesized, elements of top management's social capital have positive, but not identical, effects on exploitative and exploratory learning. In addition, the effects of structural social capital on learning, as well as the effects of learning on NPD outcomes, are significantly moderated by the interplay of technology uncertainty and demand uncertainty. The research concludes with implications for theory and practice.

Prior research has confirmed the relevance of new product development (NPD) to organizational performance (see literature reviews and meta-analyses by Brown and Eisenhardt, 1995, Henard and Szymanski, 2001 and Page and Schirr, 2008). NPD is often conceptualized as a learning process in which the acquisition and management of knowledge is essential (Tsai & Ghoshal, 1998); in fact, Yang, Yu, and Lee (2002) refer to knowledge management as “the lifeblood of product development” (p. 573). Two types of organizational learning—exploitative and exploratory—are particularly relevant to NPD (e.g., Auh & Menguc, 2005). Exploitative learning refers to “the refinement and extension of existing competencies, technologies, and paradigms,” and exploratory learning to “experimentation with new alternatives” (March, 1991; p. 85). Social capital theory argues that specific elements of external and internal social relationships present valuable learning resources (Adler & Kwon, 2002) and emphasizes the importance of the “relational rather than technical assets of the firm” (Atuahene-Gima & Murray, 2007; p. 2). Although Nahapiet and Ghoshal (1998) identify three distinct dimensions of social capital (structural, relational, and cognitive), prior research almost exclusively views organizational learning as a direct consequence of overall social capital. Therefore, the function of social capital in learning and NPD has not been sufficiently explored, especially with regard to the elements and dimensions of social capital and the forms of learning. Atuahene-Gima and Murray (2007) present one of the first studies to address how the elements of structural, relational, and cognitive social capital affect exploitative and exploratory learning in the context of NPD. However, since their study was conducted in the context of technology-oriented firms in China, the “generalizability of [their] findings is limited” (Atuahene-Gima & Murray, 2007; p. 22). The need to establish the cross-national validity of theoretical models developed in one country is especially relevant to NPD research because few organizations' NPD processes are limited to a single national setting (Page & Schirr, 2008). Moreover, given that the majority of studies in NPD are main-effect models, Henard and Szymanski (2001) see opportunities in determining whether the roles of certain antecedents of new product performance are more prominent under some conditions than others. In the context of social capital, Atuahene-Gima and Murray (2007) pick up this notion in calling for research into “whether the environmental […] context plays a significant role in exploitative and exploratory learning” and into “the conditions under which exploitative and exploratory learning [most] influence new product performance” (p. 23). The present research addresses these calls by empirically testing the interaction effects of technology and demand uncertainty, two environmental factors, in a theoretical model. The model, comprised of several elements of social capital, exploratory and exploitative learning, and new product performance, uses multi-country data collected in the United States, Germany, and Australia.

The present research confirms existing research in two major ways: First, our findings are in line with previous studies (e.g., Atuahene-Gima & Murray, 2007) in that the social capital of top management members can drive organizational phenomena, such as organizational learning. The study also finds that the relationship between top management's social capital and organizational learning holds across national cultural settings. The second way in which the present study is aligned with existing research is in its confirmation of the role of environmental uncertainty as a relevant moderating variable in NPD-related and social capital-related research models (Bstieler, 2005). At the same time, the present study challenges existing research in three major ways: First, it shows that fine-grained analyses of the elements of social capital are necessary (e.g., intra-industry ties are important for exploitative learning, extra-industry ties for exploratory learning). Existing research may have been too simplistic in not making these differentiations between elements of social capital (Luk et al., 2008). Second, our findings show that some elements of social capital have no effect on desired outcomes, suggesting that previous research may have focused too much on the positive effects of social capital. Third, while the general importance of environmental uncertainty in NPD-related topics is confirmed, the present findings indicate that the interplay of demand and technological uncertainty is of significant importance. Previous findings have focused only on the isolated examination of one or the other type of uncertainty.