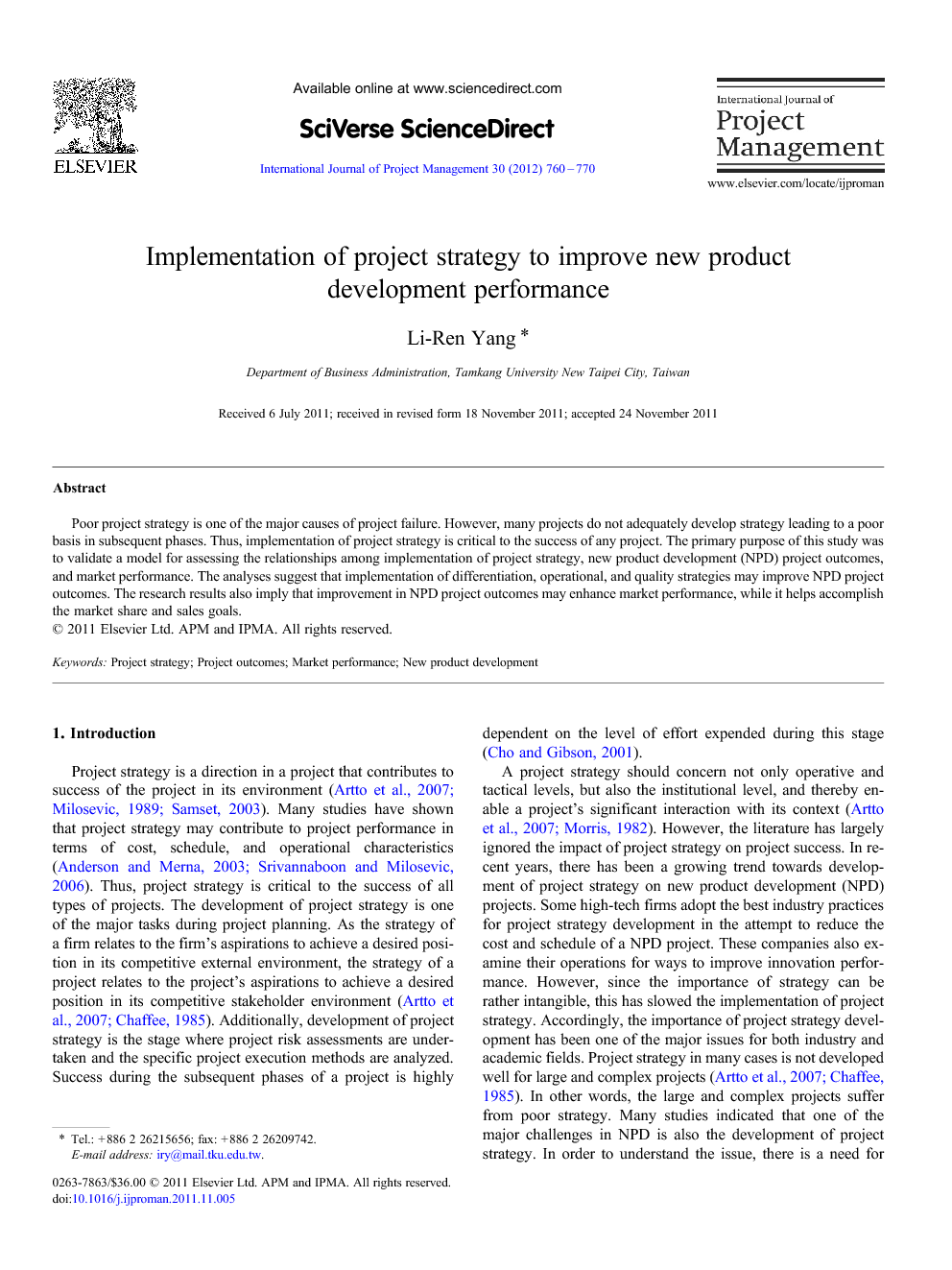 This research is the first to provide empirical evidence that supports the expectation of gaining significant benefits from implementation of diverse project strategies in new product development. This study adds to the literature in a valuable way. It validated a framework for assessing associations among project strategy implementation, NPD project outcomes, and market performance. It reveals the importance of implementing project strategy to improve NPD project performance and enhance market success of the new product. The research results also offer guides to achieve NPD project performance and increase new product advantage to improve market performance. The research findings indicate that implementation of differentiation, operational, and quality strategies is associated with NPD project outcomes in terms of schedule, quality, and innovation performance. These results are in line with previous studies in project management, which have shown that project strategy plays a crucial role in project success. Additionally, in agreement with previous studies (Sabourin and Pinsonneault, 1997, Collis and Montgomery, 1995, Prahalad and Hamel, 1990 and Porter, 1980), the research findings imply that implementation of differentiation strategy may improve innovation performance. The research results also show that improvement in NPD project outcomes may enhance market performance, while it helps accomplish the market share and sales goals. In other words, it may act as a catalyst for greater success in the market. The results are in line with previous findings (Chen et al., 2005, Schmidt and Calantone, 1998 and Tatikonda and Montoya-Weiss, 2001) in that improvement in NPD project success may gain a product competitive advantage, which results in product success in the market. Most of the research findings are in line with prior studies representing existing body of knowledge in strategy implementation. However, the results suggest that cost strategy implementation does not have significant influence on project outcomes. This indicates that while adopting differentiation, quality, and operational strategies yields significant results on NPD projects, cost strategy implementation may be appropriate for some projects. Thus, the need for cost strategy implementation (i.e., use new technology and equipment that can reduce development cost, reduce total development cost of the project, improve operational efficacy to minimize development cost, and conduct cost control) may be a project-specific issue. In other words, the association between cost strategy implementation and project outcomes may depend on job condition related variables (e.g., job satisfaction, job security, working hours, and information availability) and project characteristic related variables (e.g., time availability, complexity, team relationship, materials and supplies availability, and project duration). For example, project duration may act as a moderator between cost strategy implementation and project outcomes. Projects with longer duration may involve more complicated tasks, uncertainty, and high risk. This type of project usually involves diverse and complex requirements. It is not easy to manage the requirements and control the budget for projects with high complexity and uncertainty. Thus, short projects may be more likely to be successful in project performance when they experience a high level of cost strategy implementation than long projects. However, an objective for future study is to determine the moderating effect of job condition related variables and project characteristic related variables on the relationship between cost strategy implementation and project performance. While this study offers important insights into implementation of project strategy, there are some limitations. The targeted respondents were identified as product managers or senior individuals in R&D departments. In other words, this study employed a narrow functional perspective to analyze the issue. Although professionals in R&D departments play an important role in developing new products, they are not the only stakeholders involved in the new product development process. Future research may use broader cross-functional approach and measure strategy implementation from the viewpoints of customer, production, and marketing groups. It may focus on the joint consideration of the various perspectives. In addition, importance of strategy implementation from different viewpoints should also be investigated in future research. Another limitation is associated with evaluating the environmental factors. Like many previous studies (Lau et al., 2007, Rahim et al., 2002, Wei and Morgan, 2004 and Weng et al., 2010), this study is also based on the subjective perceptions of a single respondent. Thus, the reliability of survey relies on the truthfulness of the respondents and the expertise of the investigators in questionnaire design. A total of 269 NPD projects were investigated in the study. Thus, it is not an efficient way to use document review or action-based research to collect the necessary data or interview all team members participating in a NPD project. Although the data were based on subjective opinion, prior research suggested that subjective measurement allows rational comparisons among organizations operating in different situations (Ledwith, 2000). Respondents may be biased towards having their projects perceived positively, which may influence their evaluations of project success. However, this study was designed to eliminate mono-source bias. The mono-source bias was not a threat in this study for the following reasons: 1) this study attempted to select the right respondents who possess adequate knowledge and are capable of answering all of the survey questions, 2) third-party reports have been shown to be moderately consistent with self-reported measure (Van Dyne and LePine, 1998), and 3) the confirmatory factor analysis showed that the one-factor measurement model was a poor fit to the data (Podsakoff and Organ, 1986). In addition, because all the research data are self-reported and collected through the same questionnaire during the same period of time, a common method variance (CMV) may result in a systematic measurement error and may further bias the estimates of the true relationship between the theoretical constructs (Podsakoff and Organ, 1986). This study used the Harman's one-factor test to investigate the potential problem of common method variance, suggesting that common method bias was not considered a serious threat to this study. Although prior research argued that subjective measurement allows rational comparisons among organizations operating in different situations (Ledwith, 2000), objective measures should be used in future research to complement subjective measures.