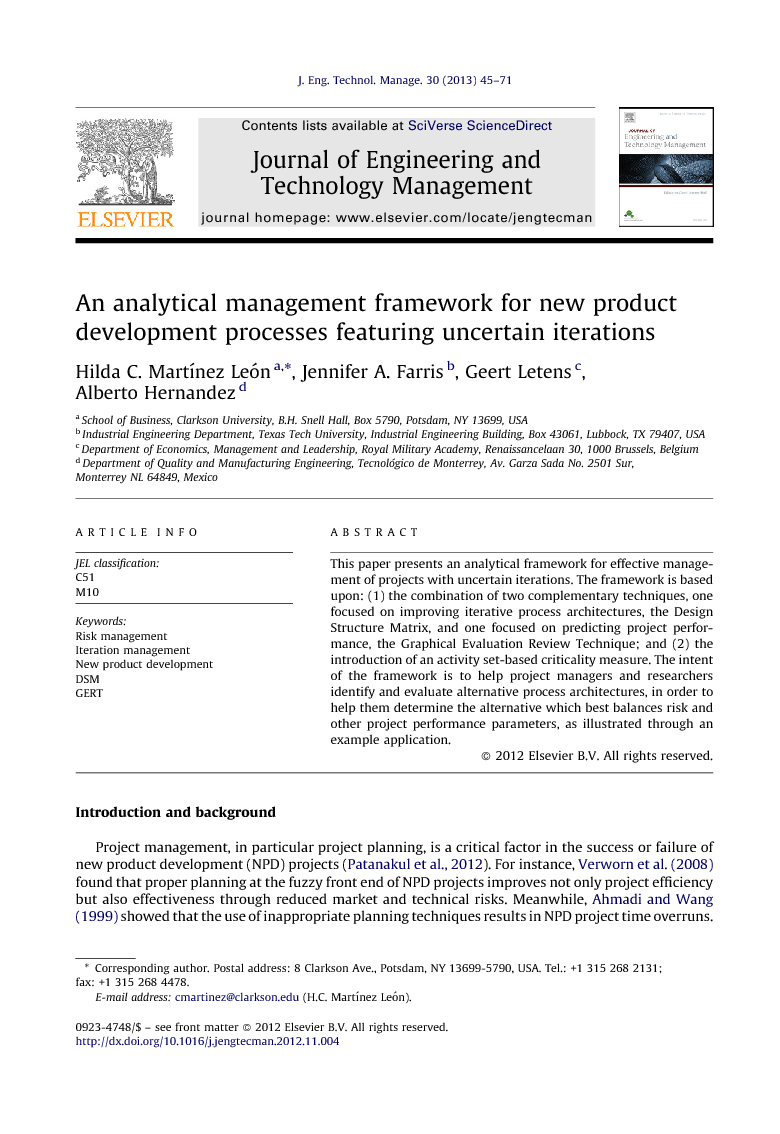 This paper presents an analytical framework for effective management of projects with uncertain iterations. The framework is based upon: (1) the combination of two complementary techniques, one focused on improving iterative process architectures, the Design Structure Matrix, and one focused on predicting project performance, the Graphical Evaluation Review Technique; and (2) the introduction of an activity set-based criticality measure. The intent of the framework is to help project managers and researchers identify and evaluate alternative process architectures, in order to help them determine the alternative which best balances risk and other project performance parameters, as illustrated through an example application.

Project management, in particular project planning, is a critical factor in the success or failure of new product development (NPD) projects (Patanakul et al., 2012). For instance, Verworn et al. (2008) found that proper planning at the fuzzy front end of NPD projects improves not only project efficiency but also effectiveness through reduced market and technical risks. Meanwhile, Ahmadi and Wang (1999) showed that the use of inappropriate planning techniques results in NPD project time overruns. Specifically, failures in project planning can result in the lack of effective identification, evaluation, prioritization, and controlling of process variation and foreseeable uncertain events (De Meyer et al., 2002). However, a key difficulty in NPD project planning is that most “traditional” project planning techniques ignore or inadequately address one key source of process variability: uncertain iterations, which have probabilistic occurrences and/or durations. Iterations are a fundamental and often unavoidable characteristic of NPD processes (Braha and Maimon, 1997, Browning and Eppinger, 2002, Lévárdy and Browning, 2009 and Unger and Eppinger, 2009). Through iterations, design ideas evolve and converge into solutions, and design incompatibilities are fixed. As such, iterations can be either beneficial or counterproductive to NPD performance (Hong-Bae et al., 2005). Iterations may be opportune when activities are repeated for idea refinement, which contributes to the reduction of technical, schedule, and budgetary risks. These types of iterative loops may therefore be retained and accelerated if possible (e.g., Smith and Eppinger, 1997b, Thomke and Fujimoto, 2000 and Langerak and Hultink, 2008). However, counterproductive iterations are akin to the rework of manufacturing processes, and should be avoided if possible (Steward, 1981, Black et al., 1990, Browning, 1998 and Denker et al., 2001). In either case, previous research has shown that iterations constitute a major source of increased NPD lead-time and cost (Meier et al., 2007), a key driver of schedule risk (Browning and Eppinger, 2002), and a source of major uncertainties in the commitment of resources, which may further delay the project (Luh et al., 1999). Accordingly, the improvement of NPD projects, through project planning, demands a deep understanding of design iterations, both productive and counterproductive (Smith and Eppinger, 1997b). Many researchers suggest that wasteful iterations typically stem from poor process architectures, namely, poor activity sequencing (Browning and Eppinger, 2002 and Wang and Lin, 2009), avoidable information changes in coupled activities due to information management problems, e.g., modifications in design objectives, wrong execution times, poor communication and coordination (Browning, 1998), and poorly timed or too frequent design reviews (Ha and Porteus, 1995). Therefore, design of a NPD project management plan should include the identification of iterative loops, the assessment of alternative process architectures (i.e., alternative arrangements of loops), removal of counterproductive iterative loops where possible, and the definition of strategies for accelerating the execution of productive or otherwise required iterative loops, among other elements. This paper presents an analytical management framework, which is intended to support effective management of projects with uncertain occurrence and duration of iterations, through the activities described above. The framework is based upon: (1) the combination of two complementary techniques, one focused on improving iterative process architectures, the Design (or Dependency) Structure Matrix (DSM), and one focused on predicting performance of projects with iterative process architectures in a closed-form, the Graphical Evaluation Review Technique (GERT); and (2) the introduction of an activity set-based criticality measure, referred to as Loop Criticality Index (LCI) based on traditional risk management methods, specifically Risk Priority Numbers (RPN) from Failure Modes and Effects Analysis (FMEA). The intent of the framework is to help project managers and researchers identify and evaluate alternative process architectures, in order to help them determine the alternative which best balances risk and other project performance parameters, as illustrated through an industrial example application. This paper is organized as follows. The section literature review provides a review of related research work. The section framework presents the major elements of the analytical management framework. The next section describes the example application. Finally, conclusions, practical implications, research limitations, and areas for future work are discussed in section conclusions.