عنوان انگلیسی
Relationship marketing on the Internet: the case of top- and lower-ranked US universities and colleges
دانلود فوری مقاله + سفارش ترجمه 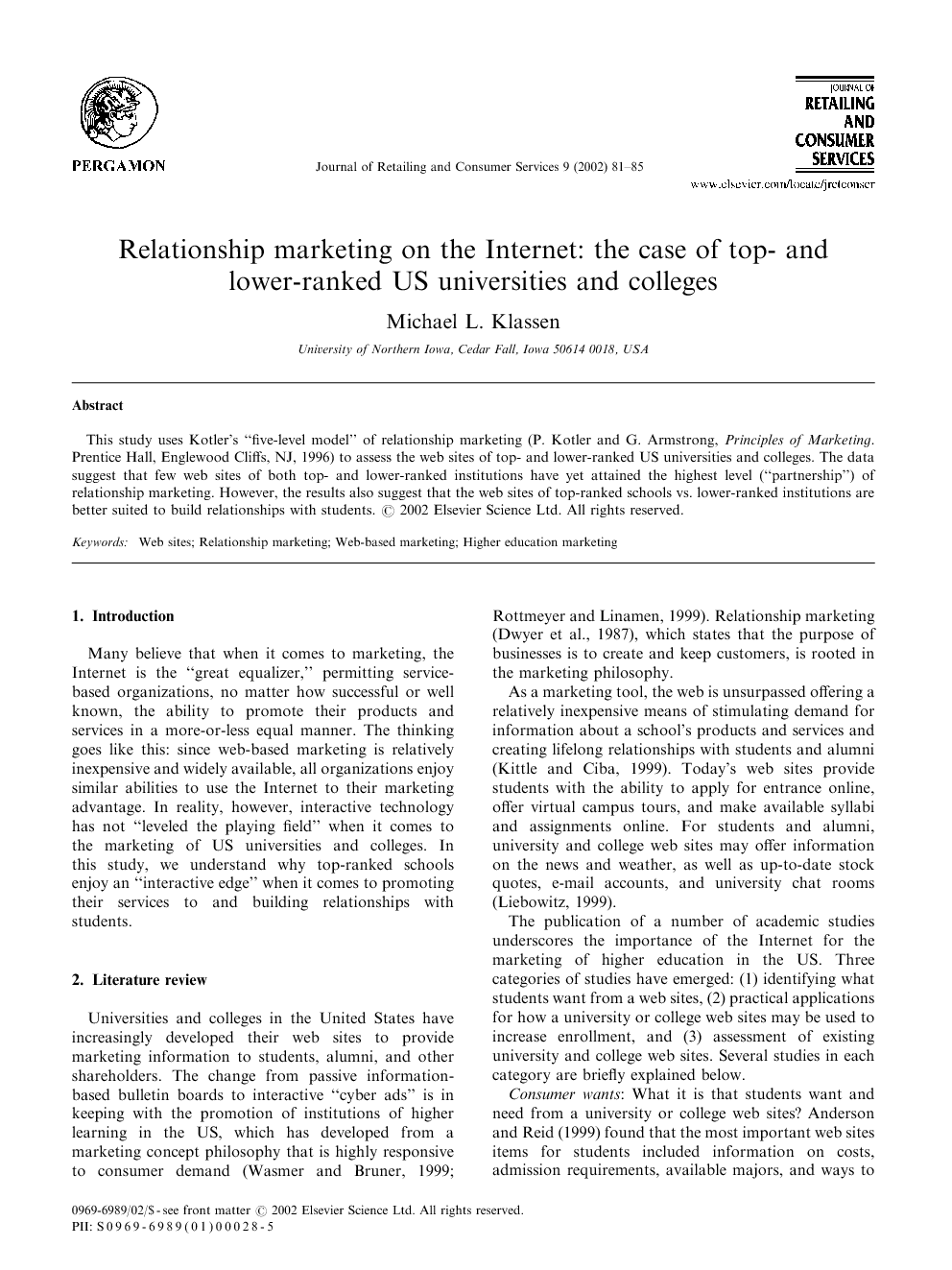 Many believe that when it comes to marketing, the Internet is the “great equalizer,” permitting service-based organizations, no matter how successful or well known, the ability to promote their products and services in a more-or-less equal manner. The thinking goes like this: since web-based marketing is relatively inexpensive and widely available, all organizations enjoy similar abilities to use the Internet to their marketing advantage. In reality, however, interactive technology has not “leveled the playing field” when it comes to the marketing of US universities and colleges. In this study, we understand why top-ranked schools enjoy an “interactive edge” when it comes to promoting their services to and building relationships with students.

Common wisdom has it that because using Internet as a marketing tool is considerably less expensive than using other media, such as television or print, web-based marketing permits service-based organizations to equally compete with each other, regardless of marked differences that may exist. This “equality for all” assumption finds some support in the world of business, where the recent success of “dot com” companies suggests that with the help of the Internet, it is possible for small, relatively unknown businesses to successfully compete with large, established corporations. What may explain the differences seen here between the web sites of top- and lower-ranked schools? What might account for the fact that top-ranked schools, by virtue of their web sites, are better equipped to create and sustain relationships with their students, compared to lower-ranked institutions? Two suggestions: First, a web site is inexpensive relative to other media, but it is still costly. For example, it takes approximately $120,000 to reach 10 million viewers using a 30-second, primetime TV commercial. In contrast, it take approximately $10,000 per month to achieve 500,000 page views each month (Boyce, 2000) Although web costs are considerably less, $10,000 a month is still a sizeable amount of money for many institutions of higher education. University and college officials are surprised to learn that few web marketing campaigns begin with less than $5000 (Han and Richard, 1999) and that businesses typically budget upwards of $3 million annually to market their products online (Blankenhorn, 1999). Although no study to date examines the relation between school ranking and marketing budget, it is commonly known that many institutions are able to achieve top ranking precisely because they are equipped with substantial financial resources. For example, a single monetary gift, if large enough, may enable a low-ranked school to achieve a higher ranking. Perhaps the disparity seen in this study is, at heart, financial, not technological, per se. Second, any organization can create a web site, but not all are committed to making it an essential and effective tool for marketing. As Klassen and Sitzman (in press) state: “the mere presence of a web site… guarantees no measurable effect on the marketing success of any organization”. A question pertinent to the effective use of the Internet as marketing tool for institutions of higher learning relates to the willingness and ability of schools to not just build, but effectively maintain and successfully operate web sites. Future research could use questionnaires sent to university and college “Web Masters” and enrollement managers to understand the level of commitment their schools have to using the web sites as a marketing tool. In conclusion, the idea that lower-ranked universities and colleges stand on an equal marketing level with top-ranked schools by virtue of their interactive technology is not supported by the results of this study. Rather, the data suggest that top-ranked schools enjoy an “interactive edge” by offering web sites suitable to creating and sustaining effective relationships with their students.