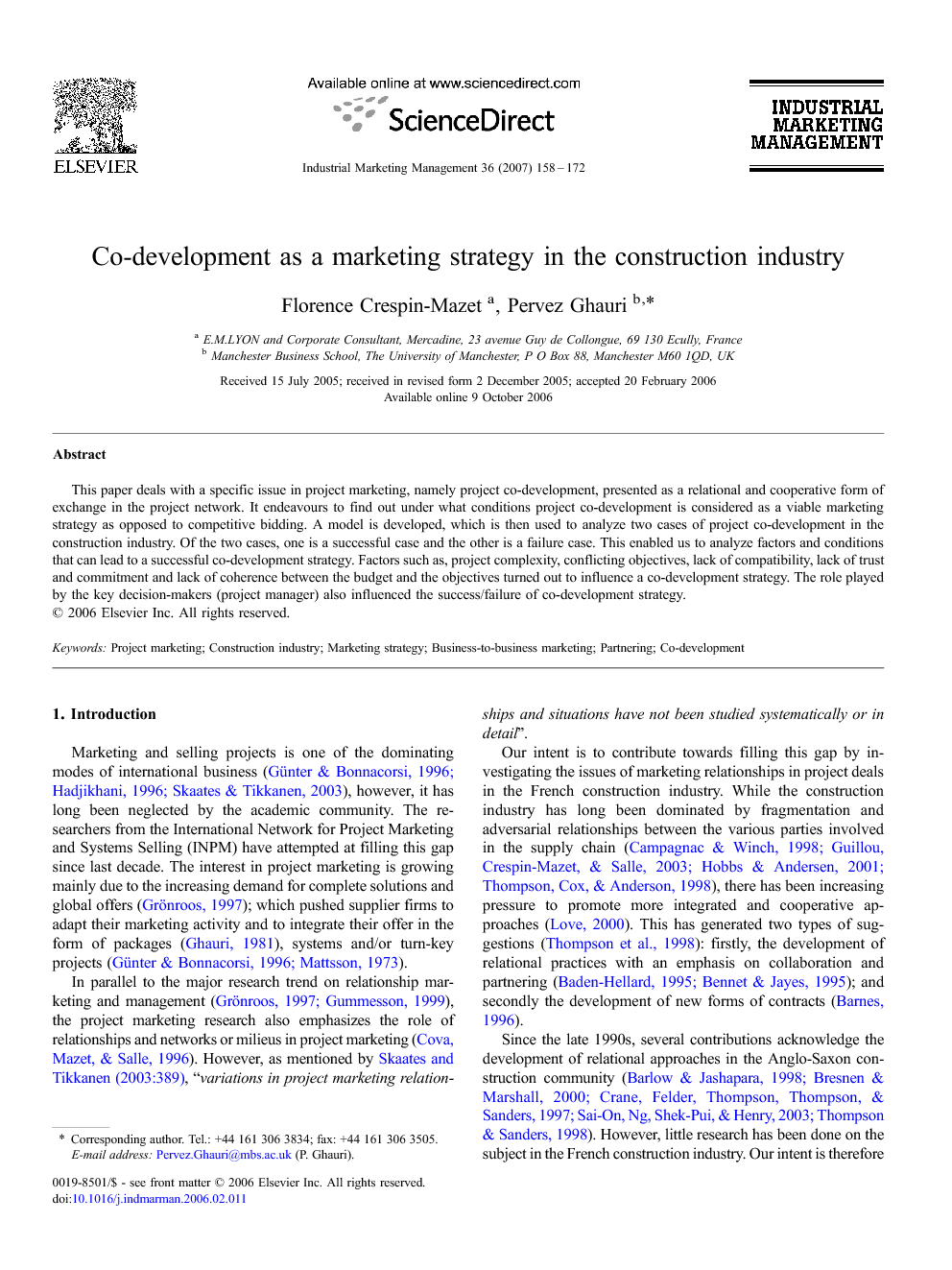 Marketing and selling projects is one of the dominating modes of international business (Günter and Bonnacorsi, 1996, Hadjikhani, 1996 and Skaates and Tikkanen, 2003), however, it has long been neglected by the academic community. The researchers from the International Network for Project Marketing and Systems Selling (INPM) have attempted at filling this gap since last decade. The interest in project marketing is growing mainly due to the increasing demand for complete solutions and global offers (Grönroos, 1997); which pushed supplier firms to adapt their marketing activity and to integrate their offer in the form of packages (Ghauri, 1981), systems and/or turn-key projects (Günter and Bonnacorsi, 1996 and Mattsson, 1973). In parallel to the major research trend on relationship marketing and management (Grönroos, 1997 and Gummesson, 1999), the project marketing research also emphasizes the role of relationships and networks or milieus in project marketing (Cova, Mazet, & Salle, 1996). However, as mentioned by Skaates and Tikkanen (2003:389), “variations in project marketing relationships and situations have not been studied systematically or in detail”. Our intent is to contribute towards filling this gap by investigating the issues of marketing relationships in project deals in the French construction industry. While the construction industry has long been dominated by fragmentation and adversarial relationships between the various parties involved in the supply chain (Campagnac and Winch, 1998, Guillou et al., 2003, Hobbs and Andersen, 2001 and Thompson et al., 1998), there has been increasing pressure to promote more integrated and cooperative approaches (Love, 2000). This has generated two types of suggestions (Thompson et al., 1998): firstly, the development of relational practices with an emphasis on collaboration and partnering (Baden-Hellard, 1995 and Bennet and Jayes, 1995); and secondly the development of new forms of contracts (Barnes, 1996). Since the late 1990s, several contributions acknowledge the development of relational approaches in the Anglo-Saxon construction community (Barlow and Jashapara, 1998, Bresnen and Marshall, 2000, Crane et al., 1997, Sai-On et al., 2003 and Thompson and Sanders, 1998). However, little research has been done on the subject in the French construction industry. Our intent is therefore to investigate whether this increasing trend towards cooperative and relational approaches also holds true in the French construction industry and if yes, analyze its patterns of development. The objective is to investigate contractors' proactive marketing strategies to co-develop the project with the buyer and/or other actors in the project network. In this case, the contractor is involved both in the design stage and the realization stage. Co-development is hereby presented as a relational approach emphasizing the early cooperation between the supplier and the buyer. We believe that the novelty of this research lies in the fact that we are analyzing relational approaches between buyers and sellers having discontinuous exchanges (see in particular Hadjikhani, 1996 and Seshadri and Mishra, 2004), while the majority of contributions on relationship marketing deals with buyer–supplier relationships having regular, continuous exchanges over a considerable period of time. Discontinuity is the key feature that distinguishes project marketing from other types of business-to-business marketing (Cova and Ghauri, 1996 and Tikkanen, 1998). It often leads to a lack of bonding, dependence and mutual orientation between actors beyond the single project (Skaates, Tikkanen, & Lindblom, 2002). Our research thus explores the idea of “contractual relations” in project exchange (Seshadri & Mishra, 2004). It focuses on the level of individual projects (Alajoutsijarvi, 1996) thus excluding contractual forms such as, consortiums, framework agreements or formal alliances.

This study has shown that several of the variables identified in the literature seem relevant to explain the adoption of a co-development process and to characterize its process. If confirmed by the careful analysis of more projects, this would mean that in spite of some specificities of the French construction industry, the reasons for entering partnering approaches in France seem similar to those identified in other countries (Anglo-Saxon and Nordic countries). The functional challenge associated to the project transaction as well as the relationship risks associated to the project network have been highlighted as key explanatory factors in the customer's contracting behaviour. In case of insufficient functional challenge, the customer does not bear a high level of risks and uncertainties (Michel et al., 2003). Therefore, the extra costs associated to the project co-development do not seem justified to depart from a traditional approach. As mentioned by Hobbs and Andersen (2001: 469) “Questioning standards and well-established project models is threatening and creates anxiety and complexity. If exposure to this complexity does not seem to be productive in terms of creating results, one reverts to the old ways”. It is also clear that a high business challenge favours the adoption of co-development, as it acts as a risk reducer. The contractor shares the risk of costs overruns if the project budget exceeds the price estimates based on the project design. Moreover, the contractor cannot claim that the project is unfeasible as such or that the time schedule cannot be respected due to unexpected problems. Therefore, co-development comes across as a better alternative than competitive bidding in case of a high project functional challenge. This confirms Barlow and Jashapara's (1998: 88) works for whom partnering relates to “the need to carry out projects with specific requirements which could not be fulfilled using traditional procurement methods”. The functional challenge increases with the impact on the customer's activity (high level of stakes). It is linked to the project technical complexity for the customer, the constraint on timing (short delays increase risks), but also on the financial constraint. In case of a tight budget, the customer's project team is often faced with an uncertainty related to their capacity to meet the financial constraint. The co-development is then a way to avoid writing detailed specifications, having to bear the transaction costs associated to re-negotiation (Kadefors, 2004), guarantee a maximum fixed price and manage the project evolutions in a transparent way (additional costs but also reduction of costs). As some sales engineers put it during the interviews, the co-development seems most appropriate when the customer finds himself in a deadlock for financial, technical or timing reasons or all of them. In that type of situation, the customer is often faced with little choice on the offer market as many construction firms in France are not structured to handle this challenge and complexity. The cases also illustrate that a high functional challenge may not be sufficient to push actors to engage into co-development strategies. The atmosphere developed between the project actors has to support this cooperative approach. The first study has shown that in case of lack of relational congruence in the project network, co-development might be jeopardized. A positive atmosphere based on trust between all the project actors is required to engage in a co-development process. This is developed through the full commitment of all the parties involved, the existence of shared goals and a direct and open communication flow. The dynamic of co-development suggests to keep an intensive and reactive rhythm based on various exchanges so as to show motivation and commitment and develop the knowledge of each party. The empirical evidence shows that the framework that we developed (Fig. 1) proved to be useful to capture the reality of co-development versus bidding. The factors identified and the moderators, relational congruence and project's functional challenge did influence customer's purchasing behaviour. The cases also illustrate that the contractor and the project network can have a direct influence on the customer's perception of the risk level (as already stated by Cova et al., 2002 and Salle and Silvestre, 1992). In the construction industry, actors such as architects or engineering firms are often part of that project network.