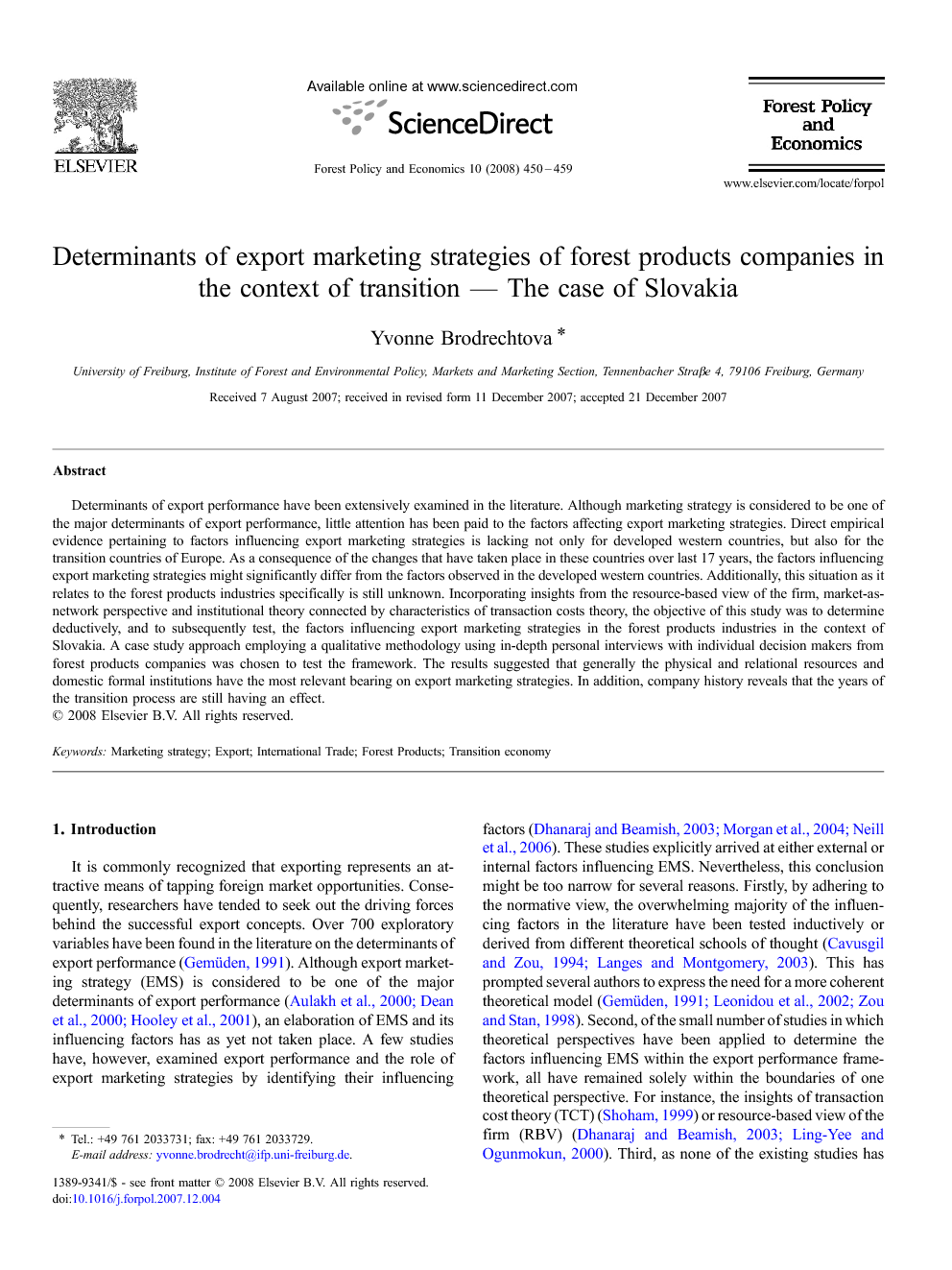 It is commonly recognized that exporting represents an attractive means of tapping foreign market opportunities. Consequently, researchers have tended to seek out the driving forces behind the successful export concepts. Over 700 exploratory variables have been found in the literature on the determinants of export performance (Gemüden, 1991). Although export marketing strategy (EMS) is considered to be one of the major determinants of export performance (Aulakh et al., 2000, Dean et al., 2000 and Hooley et al., 2001), an elaboration of EMS and its influencing factors has as yet not taken place. A few studies have, however, examined export performance and the role of export marketing strategies by identifying their influencing factors (Dhanaraj and Beamish, 2003, Morgan et al., 2004 and Neill et al., 2006). These studies explicitly arrived at either external or internal factors influencing EMS. Nevertheless, this conclusion might be too narrow for several reasons. Firstly, by adhering to the normative view, the overwhelming majority of the influencing factors in the literature have been tested inductively or derived from different theoretical schools of thought (Cavusgil and Zou, 1994 and Langes and Montgomery, 2003). This has prompted several authors to express the need for a more coherent theoretical model (Gemüden, 1991, Leonidou et al., 2002 and Zou and Stan, 1998). Second, of the small number of studies in which theoretical perspectives have been applied to determine the factors influencing EMS within the export performance framework, all have remained solely within the boundaries of one theoretical perspective. For instance, the insights of transaction cost theory (TCT) (Shoham, 1999) or resource-based view of the firm (RBV) (Dhanaraj and Beamish, 2003 and Ling-Yee and Ogunmokun, 2000). Third, as none of the existing studies has focused on the transition countries of Europe, it remains unclear whether the factors arrived at either inductively or from the various theoretical schools of thought will have any bearing on EMS in a transition context generally, and on forest products companies in particular. The recent transition process accompanied by the liberalization, privatization, and particularly the restitution of state owned forests, represents an institutional environment which differs from that which a firm in a developed western country would encounter. After all, these economies including the Slovakian economy, have had to integrate “themselves into an international economic order that closes off options available 20 or 30 years ago” (Eichengreen and Kohl, 1998: 2). Finally, the determination and testing of factors influencing EMS is still untapped in the case of the forest products industries with past research focusing mainly on either the key characteristics of successful exporters (Eastin et al., 2004) or the marketing strategy classification (Borowski, 1996, Hansen et al., 2002 and Niemelä, 1994). Unlike inductive studies which seek general conclusions, these gaps are addressed by means of a case study and employing deductive logic. What is more, the purpose of the case study was not to prove or falsify any hypothesis, but rather to ascertain influencing factors and to test their relevance with respect to the export marketing strategies construct. Additionally, applying only one theoretical perspective on the new settings of transition economies might have equated to “committing the fallacy of assuming that constructs and theories developed” in developed western countries automatically apply in transition countries also (Burgess and Steenkamp, 2006: 346). In contrast to other studies, in this case the insights of various theoretical perspectives were grouped in the manner observed in the literature on organization governance, strategic management and international business (Barney, 1986, Coles and Hesterley, 1998, Conner, 1991, Leiblein, 2003 and Leiblein and Miller, 2003). In addition, “the value of including institutional factors in the corpus of mainstream economics is made clear” (Coase, 1992: 714). Thus, the incorporation of institutions has already been evidenced in the business strategy research carried out in the transition context (Hoskisson et al., 2000 and Meyer and Peng, 2005). Further applying this logic, with the aid of the characteristics of transaction cost theory (asset specificity and exchange uncertainty) the insights of four theoretical perspectives were combined: business studies, resource-based view of the firm, market-as-network perspective and institutional theory (Fig. 1). The purpose of this review is to highlight the joint and interactive application of asset specificity and exchange uncertainty in the examination of the factors influencing the EMS construct. The similarities and differences in the assumptions and predictions offered by each theoretical perspective were also emphasized.

This case study identifies and tests factors influencing export marketing strategies by generalizing existing theories of firm, organization and business studies. Several important implications could be deduced from the findings of the study. First, the determination of the driving forces behind EMS is complex due to its dynamic nature. There are three possible reasons for this complexity. The EMS is a multi-dimensional construct determined by influences derived from four theoretical perspectives: business studies, RBV, market-as-network and institution theory. Therefore, the elaboration of influencing factors in isolation of one theory is not possible. Additionally, it is not always clear which factors are dependent and which are independent. Price, for example, is to a certain extent set by the market and could, therefore, be considered an independent influencing factor. Finally, many methodological problems are associated with testing RBV (Meyer and Peng, 2005 and Morgan et al., 2006) or institution theory (Meyer and Peng, 2005), but in-depth personal interviews allowed for generalized testing and made it possible to overcome these problems. Second, the relevant factors influencing EMS were examined in two groups based on the main transaction cost characteristics: asset specificity and exchange uncertainty. According to the RBV, the possession of assets of a tangible nature, particularly the firm resources provided a temporary competitive advantage (Barney, 1991 and Morgan et al., 2006). In addition, the results indicated that access to the available wood resources can lead to a long term advantage. Furthermore, consistent with the RBV and market-as network perspective (Dyker et al., 2003 and Johansson and Elg, 2002), the data suggested that the intangible assets such as the firm capabilities and relational resources (Cavusgil and Zou, 1994 and Styles and Ambler, 1994) were relevant factors in establishing and maintaining long term relationships with key actors. Other intangible assets, such as product related capabilities (Calantone et al., 2006, Cavusgil and Zou, 1994 and Dhanaraj and Beamish, 2003) are necessary if a company is to survive alongside old and new competitors. Thus, the findings indicated that forest products companies gradually shifted away from the vertical large volume production to a horizontal approach of specialization (Eichengreen and Kohl, 1998). Even where a firm resources and capabilities were potentially of value, they had to be effectively structured and allocated among the firms and relationships. The results suggested that this was not always the case in the situations of extreme uncertainty and where the capabilities of the indigenous leaders were lacking (Newman, 2000). Overall, deriving from the business studies, the export motivation (Cavusgil and Zou, 1994 and Langes and Montgomery, 2003) and noticeably export dependency (Calantone et al., 2006) as measure of firm's reliance on exports as a source of revenue and profit, determined the EMS of a majority of forest products companies. Taken together with the findings of comparable studies, this would indicate that perhaps these tangible and intangible assets are universal driving forces behind the formulation and implementation of EMS construct. By contrast, the uncertainty associated with, for example, the opening up of the markets and the creation of new institutions is taken for granted in comparable studies. This prompted Williamson (2000: 595) to admit that “we are still very ignorant of institutions.” Although Shoham (1999) found uncertainty on foreign markets to be a significant influencing factor, the influence of foreign formal institutions was not identified as being relevant in this study. On the contrary, given that the Slovak government was more heavily regulated in 2000 than was the case in 1993 (Pejovich, 2005), the government policy implications and programs for the forest products industry in Slovakia remained an important backdrop. This finding suggested that the governments in transition context have only a limited capacity to steer the process of economic development (Eichengreen and Kohl, 1998). On the other hand, political pressure as a result of directed investment flow, the shifting interests of professional and industry associations, or current developments in state owned forest enterprise to specify but a few factors, lead to bureaucratic impediments and prompt rent seeking behavior. As a final point, the results implied that as the transition progresses, the insights provided by institution theory might first become relevant, but later on, mostly the role of insights of RBV will be greater (Hoskisson et al., 2000, Peng, 2003 and Wright et al., 2005). Additionally, an unclear position by the government (Eichengreen and Kohl, 1998) and a lack of support interventions for the forest products sector defended this finding. However, the uncertainties associated with formal domestic institutions still led occasionally to a reliance on informal relationships (Peng and Heath, 1996). By contrast, the formal relationships derived from market-as-network perspective represented a critical market asset but are not sufficient influencing factors in the internationalization of forest products companies. This implies that both formal domestic institutions and competitive (tangible and intangible) assets were equally relevant to the export marketing strategies. Additionally, the history of the respective forest products company was found equally relevant. This suggested that the efficiency of privatized assets (Pejovich, 2005), the spillover effects of foreign direct investment (Eichengreen and Kohl, 1998, Fahy et al., 2003/4 and Uusivuori and Laaksonen-Craig, 2001) and entrepreneurial activity (Meyer and Peng, 2005) continued to have an effect after 17 years of transition. For further attempts to arrive at a conclusive set of factors influencing export marketing strategy in transition countries in general and in forest products sector in particular, it will be useful to conduct additional empirical studies in different transition countries of Europe. Once empirical investigation has provided clearer theoretical and methodological learning, the determination process will provide in-depth understanding on factors influencing EMS. Therefore, the potential of the case study in the context of Slovakia in the absence of the additional empirical studies lies in its capacity to shed more light and contribute to the theories in transition context.