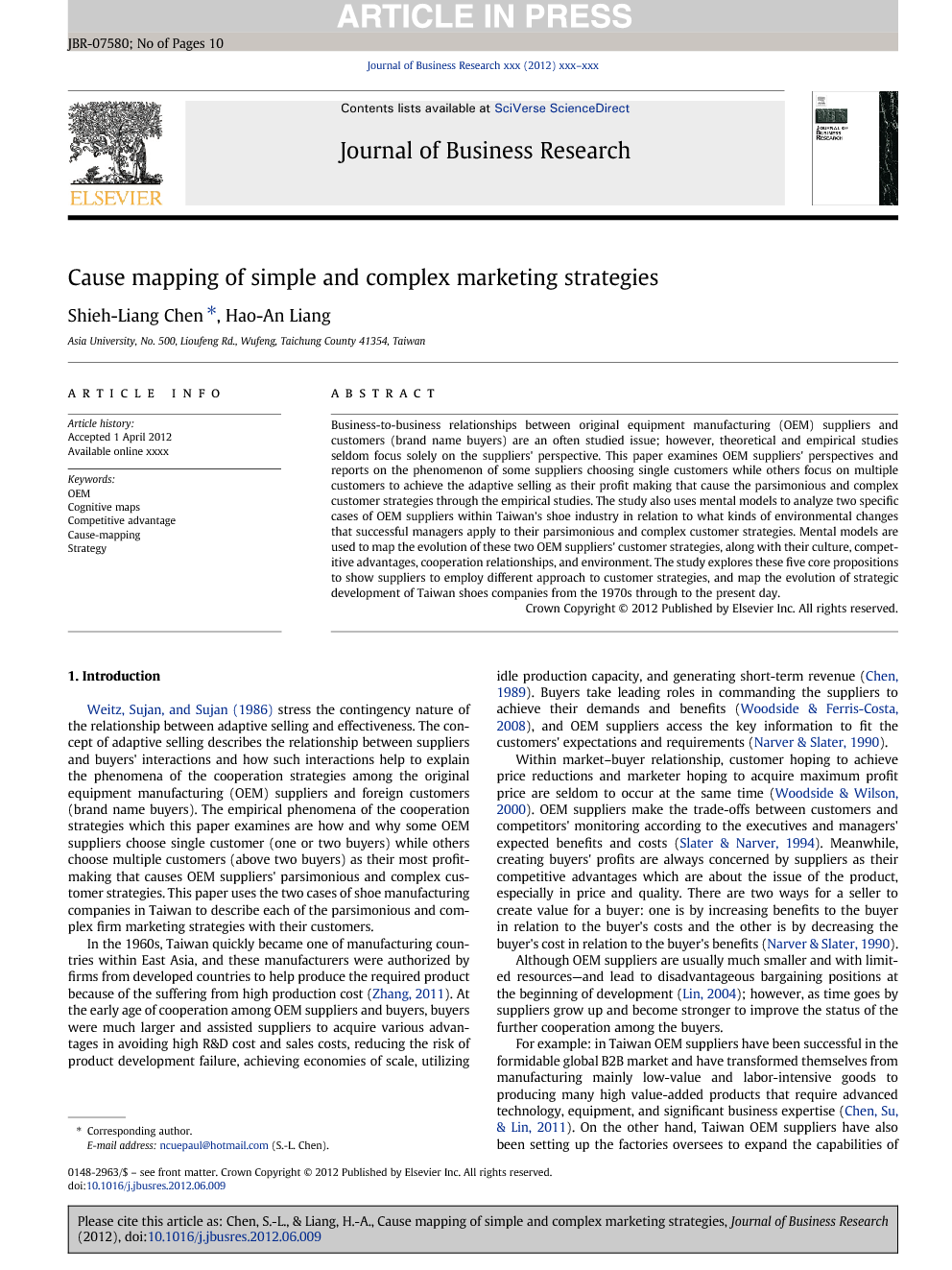 Business-to-business relationships between original equipment manufacturing (OEM) suppliers and customers (brand name buyers) are an often studied issue; however, theoretical and empirical studies seldom focus solely on the suppliers' perspective. This paper examines OEM suppliers' perspectives and reports on the phenomenon of some suppliers choosing single customers while others focus on multiple customers to achieve the adaptive selling as their profit making that cause the parsimonious and complex customer strategies through the empirical studies. The study also uses mental models to analyze two specific cases of OEM suppliers within Taiwan's shoe industry in relation to what kinds of environmental changes that successful managers apply to their parsimonious and complex customer strategies. Mental models are used to map the evolution of these two OEM suppliers' customer strategies, along with their culture, competitive advantages, cooperation relationships, and environment. The study explores these five core propositions to show suppliers to employ different approach to customer strategies, and map the evolution of strategic development of Taiwan shoes companies from the 1970s through to the present day.

Weitz, Sujan, and Sujan (1986) stress the contingency nature of the relationship between adaptive selling and effectiveness. The concept of adaptive selling describes the relationship between suppliers and buyers' interactions and how such interactions help to explain the phenomena of the cooperation strategies among the original equipment manufacturing (OEM) suppliers and foreign customers (brand name buyers). The empirical phenomena of the cooperation strategies which this paper examines are how and why some OEM suppliers choose single customer (one or two buyers) while others choose multiple customers (above two buyers) as their most profit-making that causes OEM suppliers' parsimonious and complex customer strategies. This paper uses the two cases of shoe manufacturing companies in Taiwan to describe each of the parsimonious and complex firm marketing strategies with their customers. In the 1960s, Taiwan quickly became one of manufacturing countries within East Asia, and these manufacturers were authorized by firms from developed countries to help produce the required product because of the suffering from high production cost (Zhang, 2011). At the early age of cooperation among OEM suppliers and buyers, buyers were much larger and assisted suppliers to acquire various advantages in avoiding high R&D cost and sales costs, reducing the risk of product development failure, achieving economies of scale, utilizing idle production capacity, and generating short-term revenue (Chen, 1989). Buyers take leading roles in commanding the suppliers to achieve their demands and benefits (Woodside & Ferris-Costa, 2008), and OEM suppliers access the key information to fit the customers' expectations and requirements (Narver & Slater, 1990). Within market–buyer relationship, customer hoping to achieve price reductions and marketer hoping to acquire maximum profit price are seldom to occur at the same time (Woodside & Wilson, 2000). OEM suppliers make the trade-offs between customers and competitors' monitoring according to the executives and managers' expected benefits and costs (Slater & Narver, 1994). Meanwhile, creating buyers' profits are always concerned by suppliers as their competitive advantages which are about the issue of the product, especially in price and quality. There are two ways for a seller to create value for a buyer: one is by increasing benefits to the buyer in relation to the buyer's costs and the other is by decreasing the buyer's cost in relation to the buyer's benefits (Narver & Slater, 1990). Although OEM suppliers are usually much smaller and with limited resources—and lead to disadvantageous bargaining positions at the beginning of development (Lin, 2004); however, as time goes by suppliers grow up and become stronger to improve the status of the further cooperation among the buyers. For example: in Taiwan OEM suppliers have been successful in the formidable global B2B market and have transformed themselves from manufacturing mainly low-value and labor-intensive goods to producing many high value-added products that require advanced technology, equipment, and significant business expertise (Chen, Su, & Lin, 2011). On the other hand, Taiwan OEM suppliers have also been setting up the factories oversees to expand the capabilities of production in consideration of cost factors like labor, land, logic and tariffs in order to maintain their strengths. Campbell's (1985) buyer–seller interaction model (Fig. 1) shows the relationship among the product characteristics, supplier and buyer's characteristics, and interaction process. The relationships among suppliers and buyers have three major interactions – competitive, cooperative, and command (Campbell, 1985) – that show the various cooperation models along with each company's status, and then involve more detail about the company's organization development and marketing strategies. For example, if a buyer is larger than a supplier, or a supplier is larger than a buyer, the larger buyer or supplier will command the other; however the product characteristics will moderate the relationship between them. Transactions among the buyers and suppliers have different command and cooperative status because of the suppliers' and buyers' power and potential to lead the business.Theoretical studies have examined issues involving manufacturers, retailers, and distributors (e.g., Chiang et al., 2003, Dutta et al., 1999, Fingleton, 1997 and Rey and Stiglitz, 1995), but these studies are on the buyer's perspective, and empirical studies that use the supplier as the unit of analysis are lacking (Rossetti & Choi, 2008). This study focuses on the suppliers' perspective and compares the OEM suppliers' parsimonious or complex strategies in relation to single or multiple customers. The paper uses mental models to analyze each case of the parsimonious and complex customers' strategies, and these strategies describe OEM suppliers' competitive advantages which are about the external environment and the internal characteristics in company organization (Walker & Ruekert, 1987). OEM supplier's external environment concerns itself with customer relationships, transaction cost, and market trends. The internal characteristics among supplier consist of the strategic management and entrepreneurship literature in relation to innovativeness, risk taking, and proactiveness which are the three underlying dimensions of the organizational predisposition to entrepreneurial management processes (Barringer and Bluedorn, 1999, Caruana et al., 1998, Covin and Dennis, 1989, Jennings and Dean, 1990, Khandwalla, 1977, Matsuno et al., 2002, Miller, 1983, Miller and Peter, 1982 and Morris et al, 1993). On the other hand, corporate (organization) culture stresses competitiveness and entrepreneurship guided by internal cohesiveness or rules as the intermediate factor (Deshpande, Farley, & Webster, 1993) that also plays an important key factor in affecting an enterprise's marketing strategies.

The study here examines two successful cases of customer strategy development within Taiwan's rapidly changing production environment. Mapping mental models is used to describe how executives make efficient and effective decisions. However, not all of the mental models in this study are indicative of the shoe production environment in Taiwan, as over one thousand shoe manufacturing companies have ended up in failure. Barr et al. (1992, p. 34) suggest three key managerial activities that depend on beliefs about causality; they involve: “(1) attention to environmental changes, (2) the interpretation of stimuli, and (3) the matching of perceived problems with solutions.” Top managers have to constantly face a changing environment and must figure out the solutions in order to survive in the global dynamic shoe market. The new challenges always arise in the market and then more new strategies are developed to solve the new problems.