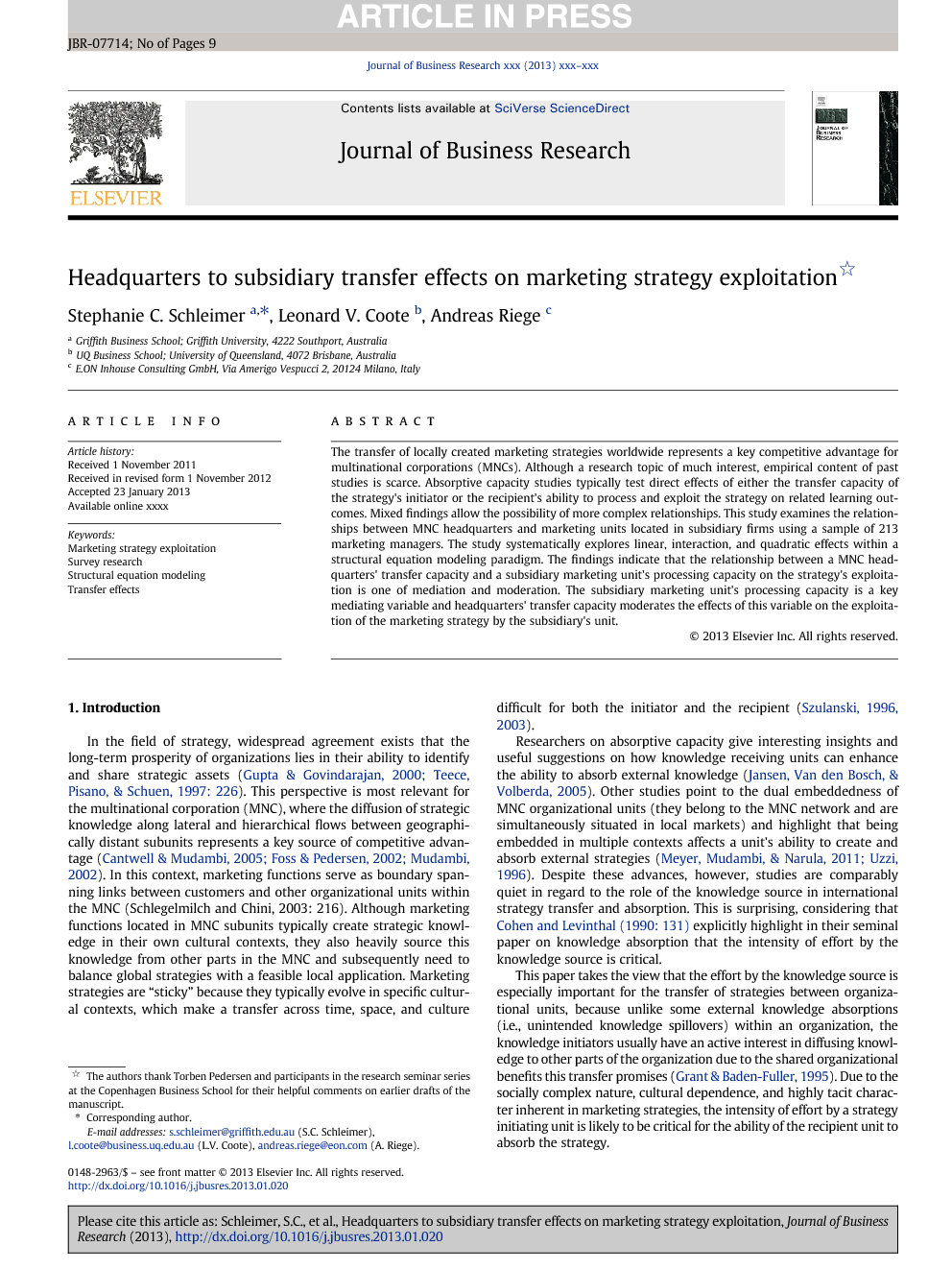 The transfer of locally created marketing strategies worldwide represents a key competitive advantage for multinational corporations (MNCs). Although a research topic of much interest, empirical content of past studies is scarce. Absorptive capacity studies typically test direct effects of either the transfer capacity of the strategy's initiator or the recipient's ability to process and exploit the strategy on related learning outcomes. Mixed findings allow the possibility of more complex relationships. This study examines the relationships between MNC headquarters and marketing units located in subsidiary firms using a sample of 213 marketing managers. The study systematically explores linear, interaction, and quadratic effects within a structural equation modeling paradigm. The findings indicate that the relationship between a MNC headquarters' transfer capacity and a subsidiary marketing unit's processing capacity on the strategy's exploitation is one of mediation and moderation. The subsidiary marketing unit's processing capacity is a key mediating variable and headquarters' transfer capacity moderates the effects of this variable on the exploitation of the marketing strategy by the subsidiary's unit.

In the field of strategy, widespread agreement exists that the long-term prosperity of organizations lies in their ability to identify and share strategic assets (Gupta and Govindarajan, 2000 and Teece et al., 1997). This perspective is most relevant for the multinational corporation (MNC), where the diffusion of strategic knowledge along lateral and hierarchical flows between geographically distant subunits represents a key source of competitive advantage (Cantwell and Mudambi, 2005, Foss and Pedersen, 2002 and Mudambi, 2002). In this context, marketing functions serve as boundary spanning links between customers and other organizational units within the MNC (Schlegelmilch and Chini, 2003: 216). Although marketing functions located in MNC subunits typically create strategic knowledge in their own cultural contexts, they also heavily source this knowledge from other parts in the MNC and subsequently need to balance global strategies with a feasible local application. Marketing strategies are “sticky” because they typically evolve in specific cultural contexts, which make a transfer across time, space, and culture difficult for both the initiator and the recipient (Szulanski, 1996 and Szulanski, 2003). Researchers on absorptive capacity give interesting insights and useful suggestions on how knowledge receiving units can enhance the ability to absorb external knowledge (Jansen, Van den Bosch, & Volberda, 2005). Other studies point to the dual embeddedness of MNC organizational units (they belong to the MNC network and are simultaneously situated in local markets) and highlight that being embedded in multiple contexts affects a unit's ability to create and absorb external strategies (Meyer et al., 2011 and Uzzi, 1996). Despite these advances, however, studies are comparably quiet in regard to the role of the knowledge source in international strategy transfer and absorption. This is surprising, considering that Cohen and Levinthal (1990: 131) explicitly highlight in their seminal paper on knowledge absorption that the intensity of effort by the knowledge source is critical. This paper takes the view that the effort by the knowledge source is especially important for the transfer of strategies between organizational units, because unlike some external knowledge absorptions (i.e., unintended knowledge spillovers) within an organization, the knowledge initiators usually have an active interest in diffusing knowledge to other parts of the organization due to the shared organizational benefits this transfer promises (Grant & Baden-Fuller, 1995). Due to the socially complex nature, cultural dependence, and highly tacit character inherent in marketing strategies, the intensity of effort by a strategy initiating unit is likely to be critical for the ability of the recipient unit to absorb the strategy. Studies that have investigated the knowledge transfer process between and within organizations typically illustrate the transfer efforts by a knowledge sender, the ability (and motivation) to absorb knowledge by the receiver, and the knowledge implementation as a simple mediated process where the impact of the knowledge source on knowledge implementation is mediated by the ability to absorb (Jansen et al., 2005, Minbaeva et al., 2003 and Zahra and George, 2002). This paper proposes that this process is more complex and responds to recent calls for more systematic, empirical research on the transfer and absorption of specific knowledge within the MNC (Kotabe et al., 2007 and Martin and Salomon, 2003). By empirically investigating specific source–recipient paths in the transfer of strategic marketing practices, this paper is one of the first to combine empirical testing of knowledge transfer capacities of the source, and processing and exploitation of a marketing strategy by the recipient unit in one process model and represents an initial effort to test domain-specific knowledge absorption in an intra-firm context (Volberda, Foss, & Lyles, 2010).