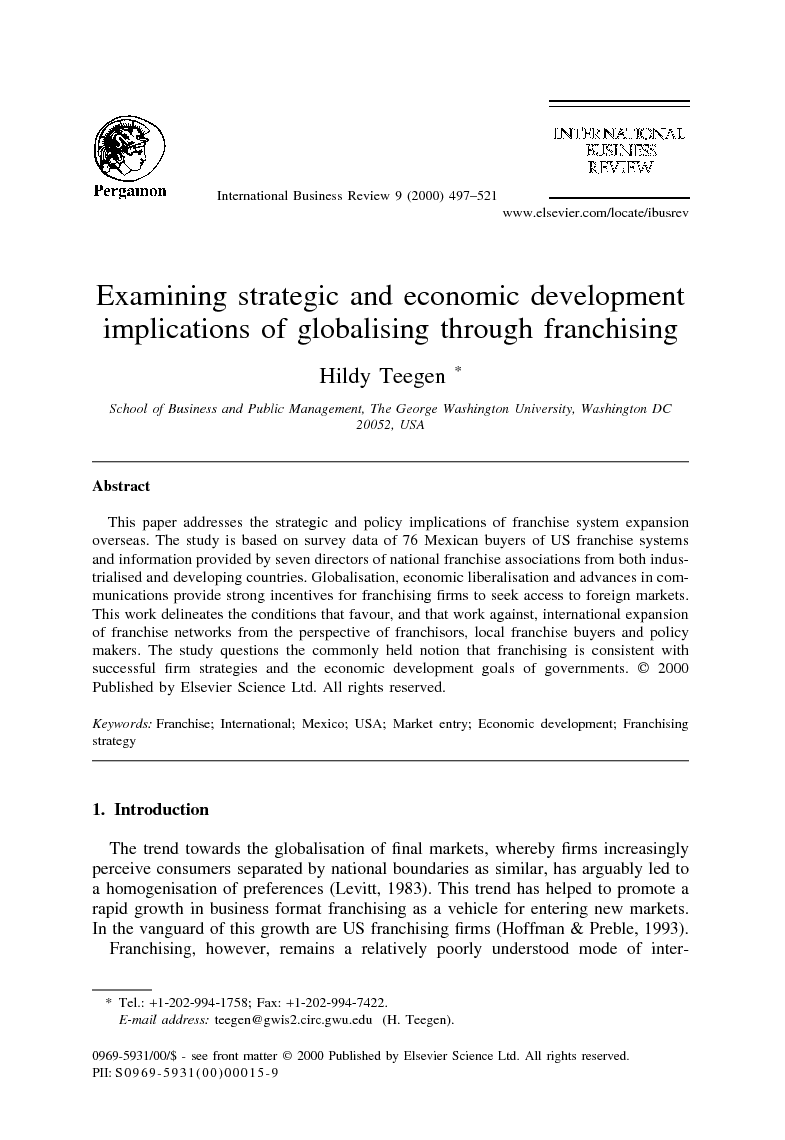 This paper addresses the strategic and policy implications of franchise system expansion overseas. The study is based on survey data of 76 Mexican buyers of US franchise systems and information provided by seven directors of national franchise associations from both industrialised and developing countries. Globalisation, economic liberalisation and advances in communications provide strong incentives for franchising firms to seek access to foreign markets. This work delineates the conditions that favour, and that work against, international expansion of franchise networks from the perspective of franchisors, local franchise buyers and policy makers. The study questions the commonly held notion that franchising is consistent with successful firm strategies and the economic development goals of governments.

The trend towards the globalisation of final markets, whereby firms increasingly perceive consumers separated by national boundaries as similar, has arguably led to a homogenisation of preferences (Levitt, 1983). This trend has helped to promote a rapid growth in business format franchising as a vehicle for entering new markets. In the vanguard of this growth are US franchising firms (Hoffman & Preble, 1993). Franchising, however, remains a relatively poorly understood mode of internationalisation. To a large extent, research has been hampered by the commonly held assumption that selling franchises into international markets is simply a cross-border extension of domestic sales. This study disputes this assumption. It draws upon the empirical results of two surveys; one, of Mexican firms operating US-originated franchise systems, and a second of the directors of national franchise associations in various industrialised and developing countries. We find that distinctions should be drawn between domestic and international franchising transactions, in terms of the resources provided and accessed by franchisors and foreign firms. The discussion then turns to the strategic considerations of franchisees and franchisors contemplating involvement in international business format franchising. It focuses on the concerns that format sellers and buyers might have with franchising as an effective and efficient mode of operation. Finally, some implications for policy makers in terms of the impact of franchising on economic development are considered.

This paper addresses a number of important issues regarding the internationalisation of franchising. First, it points to globalisation, economic liberalisation and country-of-origin effects as conducive to the greater international expansion of franchising. Certainly, the projected growth rate for foreign-based franchising, as noted in Table 3 by the national Franchise Association directors, suggests that this trend will continue. However, it is evident that there are justifiable concerns regarding international expansion via franchising, from the perspectives of potential franchise buyers and policy makers in the local markets and, indeed, on the part of franchisors. From the viewpoint of a firm that has developed a saleable business concept, franchising occupies an important position as a strategic route of foreign market entry. This is the least controversial conclusion. This paper makes the case, however, that there is a strong and growing imperative for such firms to consider also the internal route to internationalisation, via company-owned outlets and equity joint ventures, providing that they possess the requisite financial and managerial capabilities. As regards the benefits to franchise buyers there are clear sources of advantages, but also of drawbacks. Our study suggests that buyers of foreign franchises should be aware that the benefits of system membership typically ascribed to franchising in the domestic context might not necessarily accrue to them. We argue that the value of a `proven' business system, training, support and access to advertising and purchasing cooperatives, may be significantly lower in the foreign market than in the home market, especially in developing countries. Further investigation from the perspective of the franchise buyer and of the `business package' it receives from foreign franchisors is warranted. This applies to buyers in both industrialised and developing countries. In theory, and demonstrably in practice within domestic markets, franchising does appear to have positive impacts on firms and employees, as would be consistent with meeting economic development goals. But, when one comes to consider the wider economic and development issues, the merits of international franchising as a first best solution are less clear. The case of Mexican buyers of US-based franchise systems demonstrates these concerns. And information provided in the literature, and by franchise association directors in seven countries, suggests that these problems are widespread. However, the important principle appears to be that local governments need to improve conditions that favour all inter-firm collaboration, that is, both local and international franchising, in order that firms can better choose for themselves.