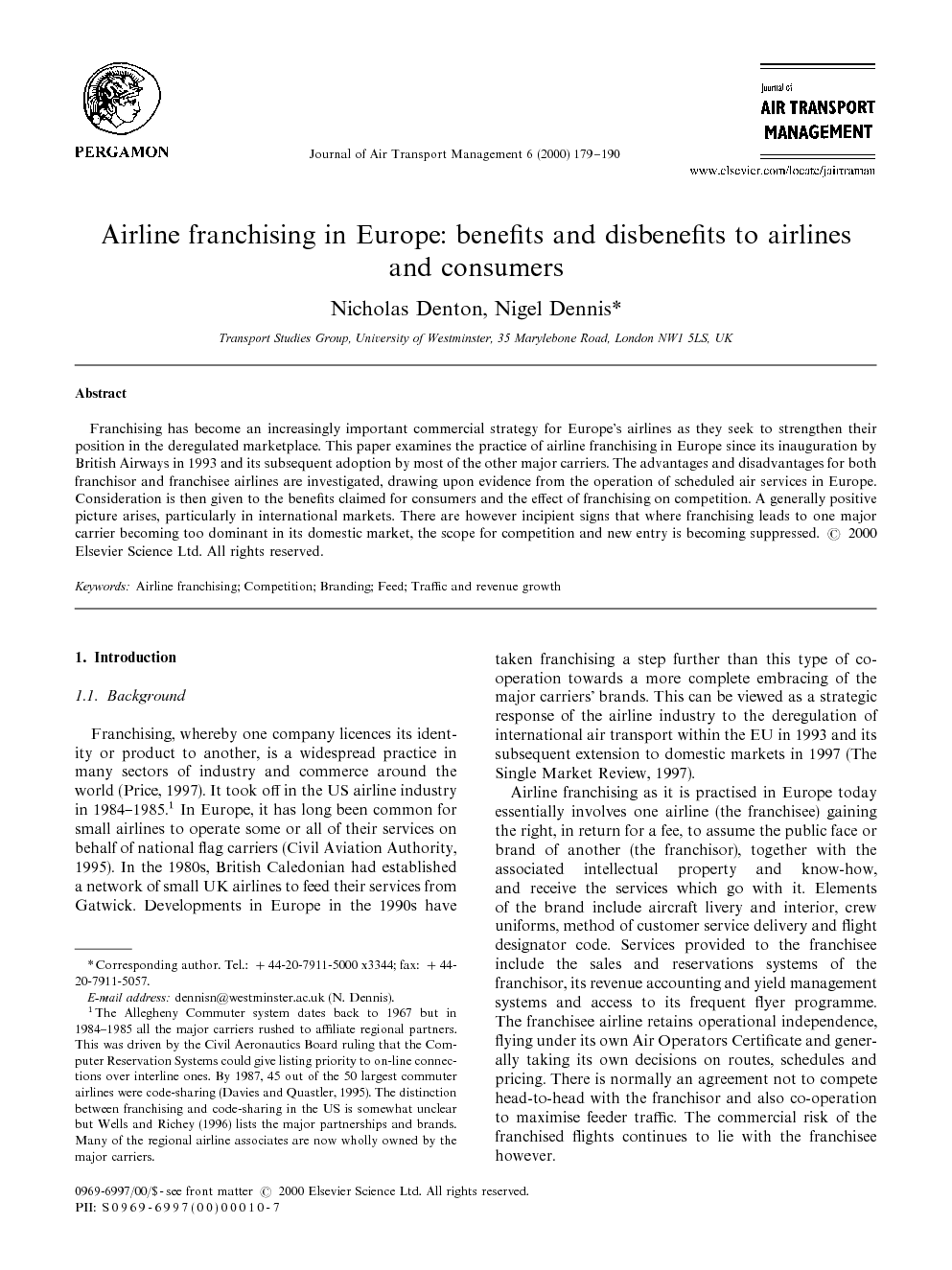 Franchising has become an increasingly important commercial strategy for Europe's airlines as they seek to strengthen their position in the deregulated marketplace. This paper examines the practice of airline franchising in Europe since its inauguration by British Airways in 1993 and its subsequent adoption by most of the other major carriers. The advantages and disadvantages for both franchisor and franchisee airlines are investigated, drawing upon evidence from the operation of scheduled air services in Europe. Consideration is then given to the benefits claimed for consumers and the effect of franchising on competition. A generally positive picture arises, particularly in international markets. There are however incipient signs that where franchising leads to one major carrier becoming too dominant in its domestic market, the scope for competition and new entry is becoming suppressed.

1.1. Background Franchising, whereby one company licences its identity or product to another, is a widespread practice in many sectors of industry and commerce around the world (Price, 1997). It took off in the US airline industry in 1984–1985.1 In Europe, it has long been common for small airlines to operate some or all of their services on behalf of national flag carriers (Civil Aviation Authority, 1995). In the 1980s, British Caledonian had established a network of small UK airlines to feed their services from Gatwick. Developments in Europe in the 1990s have taken franchising a step further than this type of co-operation towards a more complete embracing of the major carriers’ brands. This can be viewed as a strategic response of the airline industry to the deregulation of international air transport within the EU in 1993 and its subsequent extension to domestic markets in 1997 (The Single Market Review, 1997). Airline franchising as it is practised in Europe today essentially involves one airline (the franchisee) gaining the right, in return for a fee, to assume the public face or brand of another (the franchisor), together with the associated intellectual property and know-how, and receive the services which go with it. Elements of the brand include aircraft livery and interior, crew uniforms, method of customer service delivery and flight designator code. Services provided to the franchisee include the sales and reservations systems of the franchisor, its revenue accounting and yield management systems and access to its frequent flyer programme. The franchisee airline retains operational independence, flying under its own Air Operators Certificate and generally taking its own decisions on routes, schedules and pricing. There is normally an agreement not to compete head-to-head with the franchisor and also co-operation to maximise feeder traffic. The commercial risk of the franchised flights continues to lie with the franchisee however. Table 1 sets out the extent of involvement of European airlines in franchising in April 1999. With the exception of the British Airways (BA) franchises, all these arrangements have been set up since October 1996. It is important to distinguish the franchise operations listed from numerous other commercial relationships that exist between Europe's airlines including wet lease, code-share, etc. (Endres, 2000).There are few examples of franchising arrangements other than by EU airlines within the EU or US airlines within the US. Comair, British Airways’ franchise in South Africa, is one of the rare exceptions. This situation is strongly influenced by traffic rights. A service franchised to a foreign carrier might be considered as being by the foreign franchisor (and hence denied traffic rights) rather than the local franchisee who possesses these rights. Although nationality of the aircraft would be satisfied, nationality of the airline might not (Mendes de Leon, 1992). Unlike code-sharing or block-spacing with multiple codes, this is particularly a problem with franchising where only the foreign franchisor's code is carried (Naveau, 1999). When Deutsche BA operated international services from Berlin in the mid-1990s, it used only the BA code to Stockholm and Madrid but was forced to use only the DI code to Moscow and St Petersburg. Although South Africa seem to be happy to allow Comair to operate as British Airways on both domestic and international routes, other nations such as France and Switzerland require that both franchisor and franchisee must possess the necessary bilateral rights. The US position is that they would not allow an agreement which amounts to effective commercial control. This seems to have been sufficient to deter airlines such as BA or Virgin from attempting to franchise a US carrier. 1.2. Nature of franchising agreements Individual franchise agreements are normally commercially confidential. However, the respective obligations of franchisor and franchisee are known in general terms. The responsibilities of the former include the provision of manuals on customer service procedures, the provision of training, advice on how to do things the franchisor airline way, access to the frequent flyer programme and feedback to the franchisee on the results of audits of its technical operations, security and customer services. The obligations of the franchisee generally include operating in accordance with the franchisor's style and to its standards, the provision of information to the franchisor, the purchase of goods (e.g. uniforms, baggage tags and other branded items, catering `rotables', in-flight magazines and public signage) from nominated suppliers and the arrangement of adequate insurance cover. An Annex to the agreement normally lists those routes which will be flown under the franchise: this can be added to during the franchise period, which appears to vary from between 5 and 10 years. Separate sub-agreements cover the provision of revenue accounting services and inventory management. The franchisee pays a fee for the use of the franchisor's intellectual property (the licence fee), together with a fee for services received (training, revenue accounting, etc.). These services are normally charged for at a fixed rate plus a rate per passenger processed. The formula for the franchise licence seems to vary more. In the case of British Airways, some franchisees pay BA an amount per passenger they carry, others pay according to the amount of feed provided by the franchisee to BA, the density of the route and the brand value of BA in the countries concerned. BA plan that in future fees should reflect the contribution to the franchisee's profitability made by the agreement (Woodrow, 1999). The degree of information provided to passengers about which airline will actually be operating the service varies substantially. Early research on code-sharing, such as a survey of German travel agents by Beyhoff (1995) suggested consumers received incomplete information on the operating carrier on 80% of occasions. Under EU Regulation 323/1999, passengers are supposed to be informed at the time of purchasing their ticket which airline will be carrying them. British Airways tries to repeat this information in many different places. Lufthansa's and Alitalia's timetables also make it clear which service will be operated by which airline. The main exception to the transparency rule seems to be Air France: it is impossible from their Summer 1999 timetable to distinguish which routes will be operated by Air France and which by their franchisees.

Franchising undoubtedly brings benefits to airlines, both franchisor and franchisee. The brand reach of the franchisor is extended to routes too small for it to be able to operate profitably itself, without the need for capital expenditure and at no financial risk. Franchisees can also provide valuable traffic feed to the franchisor. For the franchisee, franchising gives it the power of the major's brand, its frequent flyer programme and sales and distribution services. These come at a price, but the price is more than compensated for by the extra traffic and revenue which the above advantages attract, together with the greater security of existence. Consumers benefit from the fact that franchising, on balance, has led to the establishment of new routes and the serving of existing routes more frequently, although the lower costs of the franchisees do not seem to feed through to lower fares. On international routes within Europe, competition does not seem to have been adversely affected by franchising. However, there are incipient signs that, in some European domestic markets, franchising may be discouraging new entry on the admittedly small proportion of routes thick enough to sustain competition. It seems possible to conclude that, so far, the positive effects of franchising outweigh the negative, although the situation needs to be watched. While British Regional Airlines claim that franchising means `everyone's a winner’ (Bathgate, 1998), the more tentative conclusion of this paper is that, while airlines might be winning and consumers benefiting from certain aspects of franchising, the game is still being played out and could result in consumers losing more than they gain, if some brands come to dominate their respective markets too powerfully.