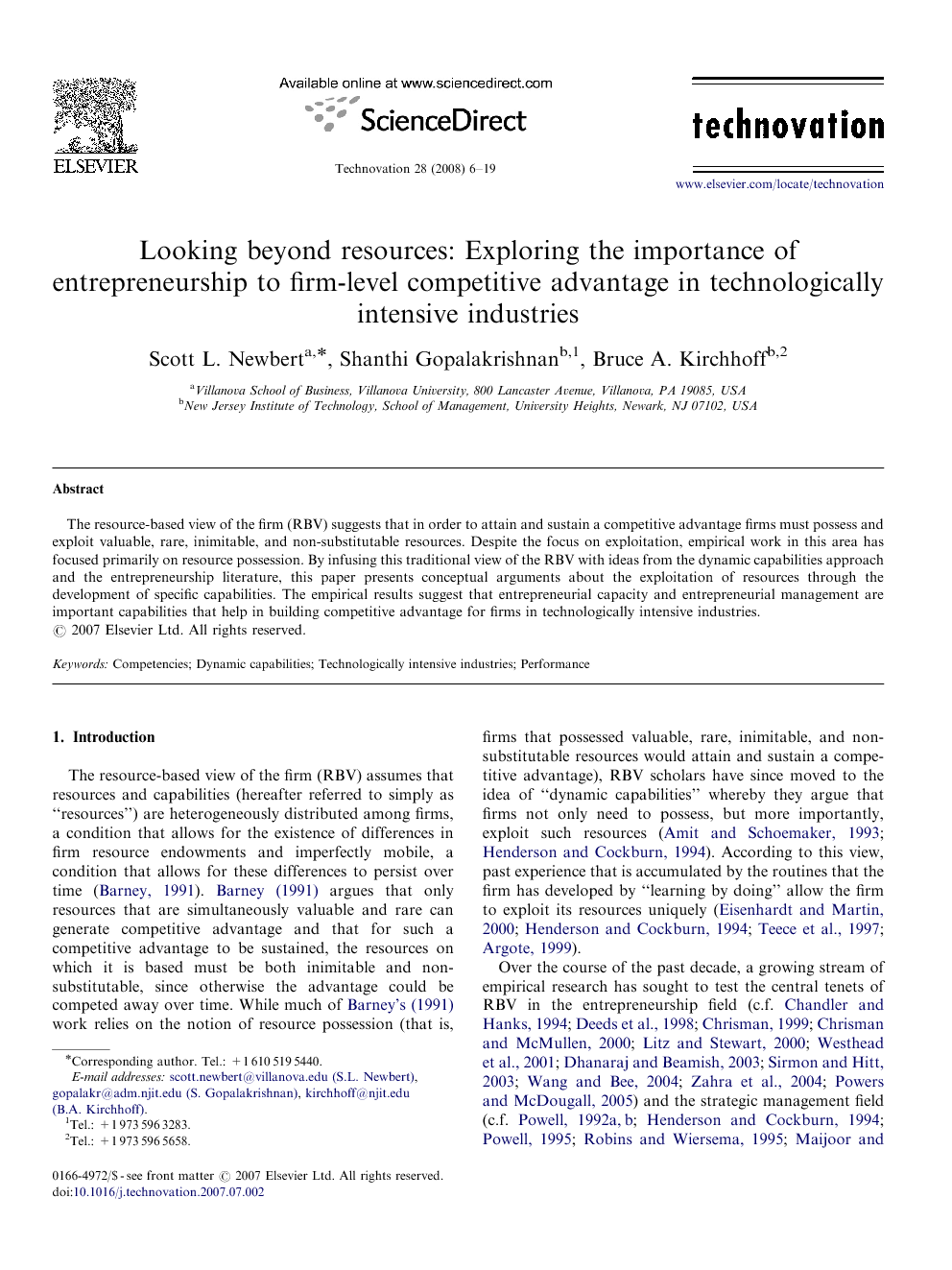 The resource-based view of the firm (RBV) suggests that in order to attain and sustain a competitive advantage firms must possess and exploit valuable, rare, inimitable, and non-substitutable resources. Despite the focus on exploitation, empirical work in this area has focused primarily on resource possession. By infusing this traditional view of the RBV with ideas from the dynamic capabilities approach and the entrepreneurship literature, this paper presents conceptual arguments about the exploitation of resources through the development of specific capabilities. The empirical results suggest that entrepreneurial capacity and entrepreneurial management are important capabilities that help in building competitive advantage for firms in technologically intensive industries.

The resource-based view of the firm (RBV) assumes that resources and capabilities (hereafter referred to simply as “resources”) are heterogeneously distributed among firms, a condition that allows for the existence of differences in firm resource endowments and imperfectly mobile, a condition that allows for these differences to persist over time (Barney, 1991). Barney (1991) argues that only resources that are simultaneously valuable and rare can generate competitive advantage and that for such a competitive advantage to be sustained, the resources on which it is based must be both inimitable and non-substitutable, since otherwise the advantage could be competed away over time. While much of Barney's (1991) work relies on the notion of resource possession (that is, firms that possessed valuable, rare, inimitable, and non-substitutable resources would attain and sustain a competitive advantage), RBV scholars have since moved to the idea of “dynamic capabilities” whereby they argue that firms not only need to possess, but more importantly, exploit such resources (Amit and Schoemaker, 1993; Henderson and Cockburn, 1994). According to this view, past experience that is accumulated by the routines that the firm has developed by “learning by doing” allow the firm to exploit its resources uniquely (Eisenhardt and Martin, 2000; Henderson and Cockburn, 1994; Teece et al., 1997; Argote, 1999). Over the course of the past decade, a growing stream of empirical research has sought to test the central tenets of RBV in the entrepreneurship field (c.f. Chandler and Hanks, 1994; Deeds et al., 1998; Chrisman, 1999; Chrisman and McMullen, 2000; Litz and Stewart, 2000; Westhead et al., 2001; Dhanaraj and Beamish, 2003; Sirmon and Hitt, 2003; Wang and Bee, 2004; Zahra et al., 2004; Powers and McDougall, 2005) and the strategic management field (c.f. Powell, 1992a and Powell, 1992b; Henderson and Cockburn, 1994; Powell, 1995; Robins and Wiersema, 1995; Maijoor and Van Witteloostuijn, 1996; Miller and Shamsie, 1996; Powell and Dent-Micallef, 1997; Russo and Fouts, 1997; Combs and Ketchen, 1999; Makadok, 1999; Yeoh and Roth, 1999; Knott, 2003). Such studies, which are intended to serve as a representative sample of the RBV-grounded empirical literature, typically correlate the amount of a given resource possessed by a firm with some measure of competitive advantage. This approach has yielded a substantial amount of empirical evidence suggesting that the competitive positions of firms are at least in part a function of the resources they possess. Yet, because resources do not exploit themselves, these findings may not tell the whole story. We argue that by including the dynamic capabilities approach and by identifying the factors that facilitate the exploitation of resources in the entrepreneurial context, scholars may be better positioned to further specify the competencies that allow the exploitation of resources. This would provide useful advice to practicing managers, in both new and small firms that lack a broad resource portfolio as well as incumbent firms seeking to enter new markets in which they lack the accepted bases of competition. This paper will provide empirical evidence regarding what firm-level factors allow entrepreneurial firms to create, reconfigure and recombine resources to create new value through innovation (Teece et al., 1997). In support, recent research suggests the value of our approach. Hult et al. (2004) and Montalvo (2006) have found that entrepreneurial orientation coupled with an ability to learn and assimilate new knowledge helps firms innovate and achieve better than average performance in high-technology industries that are volatile. The implied dynamics of their research is similar to dynamic capabilities that consist of specific organizational processes such as product development, alliancing, strategic decision-making, and the like that create value for firms within volatile markets through the manipulation of resources (Eisenhardt and Martin, 2000). In developing and testing our model, we focus on firms competing in technologically intensive industries as they have been found to be among the most significant contributors to the economy in terms of their innovativeness and growth (Kirchhoff, 1994). We examine two new kinds of capabilities: entrepreneurial capacity and entrepreneurial management both of which allow firms to navigate the environmental uncertainties and learn new routines, which in turn enable firms to generate new and synergistic resource combinations (Eisenhardt and Galunic, 2000).