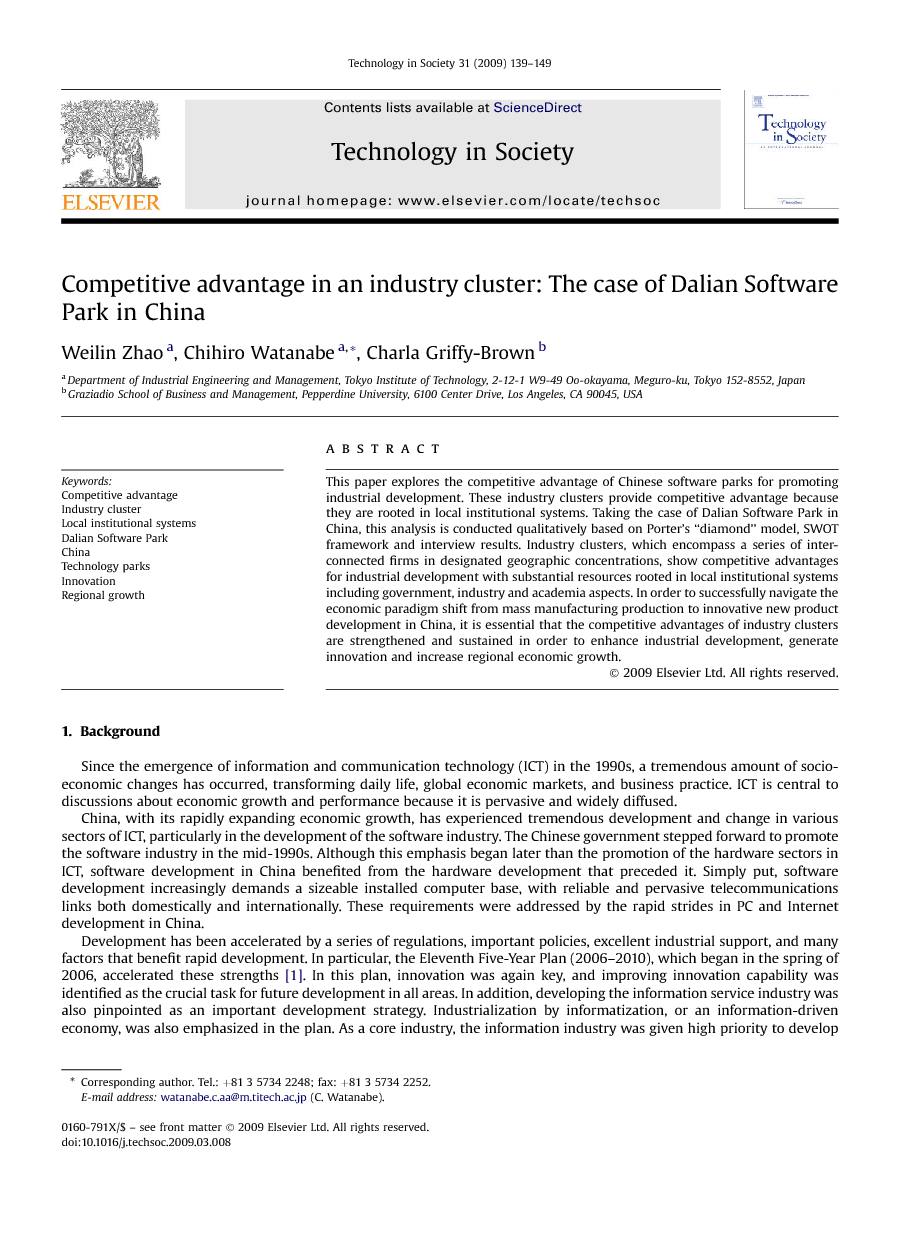 Since the emergence of information and communication technology (ICT) in the 1990s, a tremendous amount of socio-economic changes has occurred, transforming daily life, global economic markets, and business practice. ICT is central to discussions about economic growth and performance because it is pervasive and widely diffused. China, with its rapidly expanding economic growth, has experienced tremendous development and change in various sectors of ICT, particularly in the development of the software industry. The Chinese government stepped forward to promote the software industry in the mid-1990s. Although this emphasis began later than the promotion of the hardware sectors in ICT, software development in China benefited from the hardware development that preceded it. Simply put, software development increasingly demands a sizeable installed computer base, with reliable and pervasive telecommunications links both domestically and internationally. These requirements were addressed by the rapid strides in PC and Internet development in China. Development has been accelerated by a series of regulations, important policies, excellent industrial support, and many factors that benefit rapid development. In particular, the Eleventh Five-Year Plan (2006–2010), which began in the spring of 2006, accelerated these strengths [1]. In this plan, innovation was again key, and improving innovation capability was identified as the crucial task for future development in all areas. In addition, developing the information service industry was also pinpointed as an important development strategy. Industrialization by informatization, or an information-driven economy, was also emphasized in the plan. As a core industry, the information industry was given high priority to develop rapidly and promote the development of related industries. The software industry, as another important sector, continues to develop innovative products that can compete in the global market. The development history of the Chinese software industry is relatively short. In its brief history, a distinct industrial structure with two basic strategies—development in domestic markets, and exports—have led this effort. By stimulating domestic market demand and encouraging software exports, resources for software development are expected to improve in quality and in turn, induce further expansion of the domestic market and strengthen the competitive advantages of the industry. It is generally understood that demand is an important factor in promoting industrial development. ICT development brings with it a huge demand for software in various sectors of an information society. The compound annual growth rate of ICT software spending1 in 38 countries, between 1993 and 2004, ranked China at the top [2]. This demand is an important catalyst for the remarkable development of the software industry in China. At the same time, China has been adjusting its development strategy, and in 2000 it began strengthening its export policies [3]. The underlying principle of this policy is to make the software industry face two kinds of market and two kinds of resources, domestic and international, in order to make the industry more competitive globally and technologically. Efforts continue at the national level to promote software-related industry clusters in order to help realize China's goals and to achieve success in domestic and international markets. Since the early 1990s, China has begun to establish software parks, including 11 national software industrial bases and 6 national software export bases, which support the overall planning and layout of the Chinese software industry. As a result, the development environment of the Chinese software industry has been dramatically improved and awareness of the competitive advantages of these industry clusters has greatly increased. Thus, more research on the recognition and improvement of competitive advantage in an industry cluster is indispensable.

By analyzing DLSP through the use of qualitative data collection and analyses, this article identified the sources of competitive advantage for DLSP and provided insight into industrial development. With the increasing awareness of an industry cluster's competitive advantages for industrial development and regional economics, our research highlighted the role of local institutions in promoting and expanding this competitiveness. Based on the determinants of Porter's diamond model, institutional sources were categorized into government, industry, and academic vectors. Then a SWOT analysis pointed out areas for further improvement and development by identifying the strengths, weaknesses, opportunities, and threats faced by DLSP. Interview data reflected observations from the industry that supported the general analyses. China is facing a paradigm shift from labor-intensive manufacturing processing to the production of more high-tech innovative products because development that depends on low-value-added products is not sustainable. China is trying to move up the value chain in the global context. Its strategy is to develop competitive advantage in high-tech industries as a priority. The specific action taken is to encourage industry cluster formations in different cities for regional economic growth. The establishment of these industry clusters provides the industry with a favorable environment that includes attractive incentives and a well-constructed infrastructure that includes communication facilities and environmental services. Behind the visible construction, the potential intangible effects from clustering firms in industry clusters are equally important. The clustering effect stimulates more competition and collaboration among firms to produce more innovative ideas and establish a win-win environment. This process of competition and collaboration, often referred to as co-evolution, leads to good performance by the firms. Because of the clustering effects, the firms grow and promote related industry development, and then play a profound role in regional economics by growing to be more competitive internationally. Since the clustering effect also has qualities that are embodied in network externality, the more the industry clusters grow, the more firms are attracted to do business in DLSP. This attractiveness to foreign firms leads to further co-evolutionary development among the Chinese and foreign firms resulting in sustainable competitiveness. The success of DLSP as an industry cluster is based on institutional resources including strong efforts from government, industry, and academia. DLSP is an excellent model of a localized cluster in which development is deeply rooted in its local institutional systems. DLSP displays another competitive advantage by encouraging networks among firms, integrating into the international value chain of activities, and improving its reputation internationally. The utilization of an array of resources from different firms stimulates more innovation and facilitates industrial and regional economic development. While Porter believed that top-down government guidance would not impact development, Dalian's government continues to develop strategic plans to strengthen the industry's development both as a guider and a facilitator, even though DLSP is operated by the private sector. The competitive advantages of DLSP are nurtured and supported by Dalian's institutional environment in which the local government has played an important role. The limitation of this research is the lack of empirical analysis of the networks among the firms in this industry cluster, since a clustering effect from networks is strongly observed in the interview results. Therefore, an empirical analysis of networks could be a future undertaking to further elucidate this relationship and mechanisms for cooperation and innovation in the Chinese context. Undoubtedly, some weakness and underlying threats remain in DLSP. Interview results show that opportunities and challenges co-exist in DLSP, and industry observations include practical suggestions for further development of DLSP. Key implications are the reinforcement of quality management, software-related education, and partnerships among the firms, since quality is the origin of competitiveness, human resources are the key for sustaining development, and partnership is at the core of clustering.