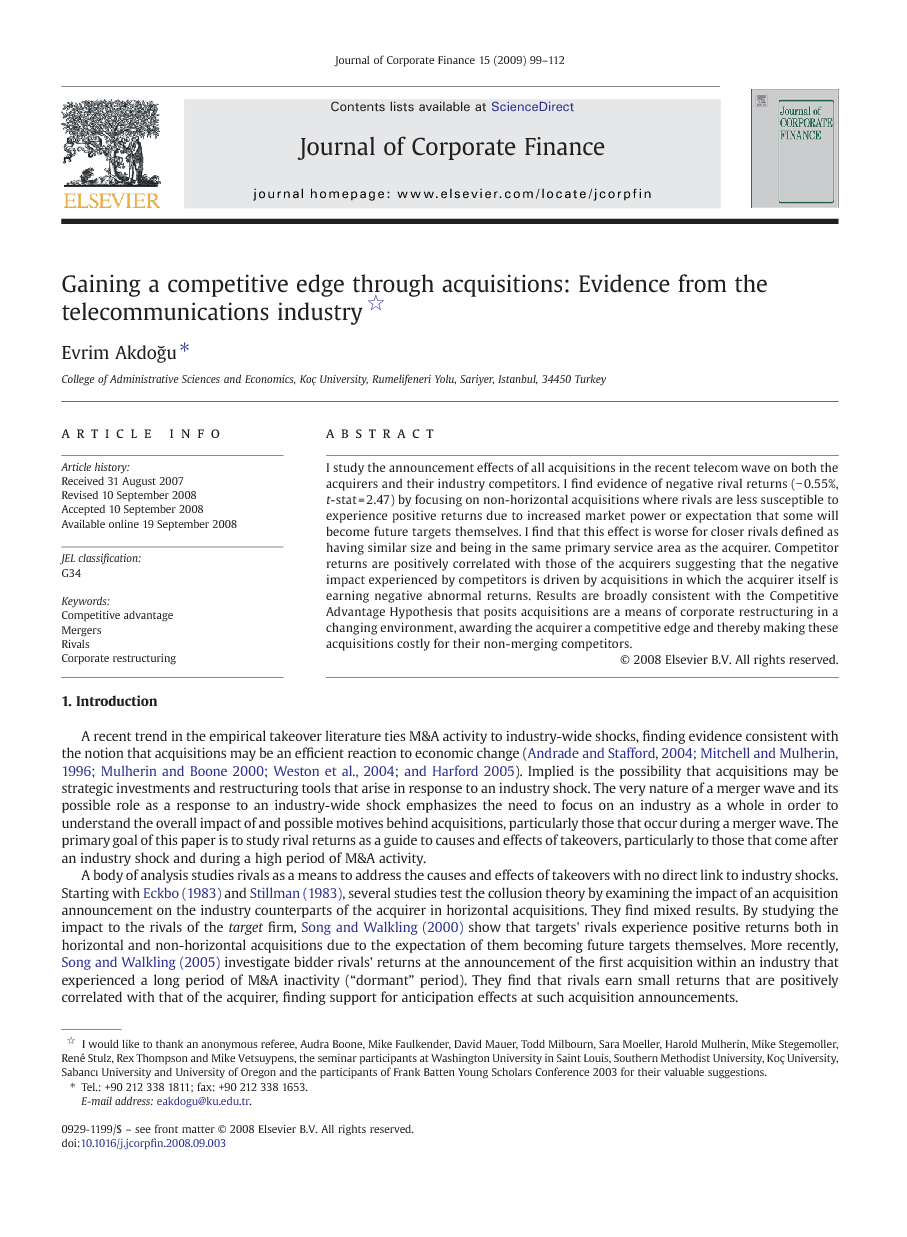 I study the announcement effects of all acquisitions in the recent telecom wave on both the acquirers and their industry competitors. I find evidence of negative rival returns (− 0.55%, t-stat = 2.47) by focusing on non-horizontal acquisitions where rivals are less susceptible to experience positive returns due to increased market power or expectation that some will become future targets themselves. I find that this effect is worse for closer rivals defined as having similar size and being in the same primary service area as the acquirer. Competitor returns are positively correlated with those of the acquirers suggesting that the negative impact experienced by competitors is driven by acquisitions in which the acquirer itself is earning negative abnormal returns. Results are broadly consistent with the Competitive Advantage Hypothesis that posits acquisitions are a means of corporate restructuring in a changing environment, awarding the acquirer a competitive edge and thereby making these acquisitions costly for their non-merging competitors.

A recent trend in the empirical takeover literature ties M&A activity to industry-wide shocks, finding evidence consistent with the notion that acquisitions may be an efficient reaction to economic change (Andrade and Stafford, 2004, Mitchell and Mulherin, 1996, Mulherin and Boone, 2000, Weston et al., 2004 and Harford, 2005). Implied is the possibility that acquisitions may be strategic investments and restructuring tools that arise in response to an industry shock. The very nature of a merger wave and its possible role as a response to an industry-wide shock emphasizes the need to focus on an industry as a whole in order to understand the overall impact of and possible motives behind acquisitions, particularly those that occur during a merger wave. The primary goal of this paper is to study rival returns as a guide to causes and effects of takeovers, particularly to those that come after an industry shock and during a high period of M&A activity. A body of analysis studies rivals as a means to address the causes and effects of takeovers with no direct link to industry shocks. Starting with Eckbo (1983) and Stillman (1983), several studies test the collusion theory by examining the impact of an acquisition announcement on the industry counterparts of the acquirer in horizontal acquisitions. They find mixed results. By studying the impact to the rivals of the target firm, Song and Walkling (2000) show that targets' rivals experience positive returns both in horizontal and non-horizontal acquisitions due to the expectation of them becoming future targets themselves. More recently, Song and Walkling (2005) investigate bidder rivals' returns at the announcement of the first acquisition within an industry that experienced a long period of M&A inactivity (“dormant” period). They find that rivals earn small returns that are positively correlated with that of the acquirer, finding support for anticipation effects at such acquisition announcements. A variety of theories are proposed for observed rival returns at the announcement of acquisitions. One such theory suggests that merging of two firms in an already concentrated industry can be beneficial for the rival firms through increased market power for all parties, resulting in positive returns for both the acquirer and the rivals (Eckbo, 1983 and Eckbo and Wier, 1985). Alternatively, the target firm might give the acquirer a competitive advantage resulting in negative abnormal returns for its competitors whether that occurs when the acquirer is earning positive returns (Eckbo, 1983 and Eckbo and Wier, 1985) or negative returns itself (Akdoğu, 2008 and Molnar, 2000). Information spillovers can also affect rival firms. An acquirer may earn negative returns since that signals a weaker competitor (McCardle and Viswanathan, 1994) or poor internal growth opportunities for the acquirer (Braguinsky and Jovanovic, 2004). If the latter is extended to the acquirer's industry as a whole, that results in a negative reaction for its rivals as well. Anticipation of some of the rivals becoming future targets (Song and Walkling, 2000) or future acquirers (Song and Walkling, 2005) themselves can also be the cause of non-zero rival returns. I study acquisitions in the Telecommunications industry after the Telecom Act of 1996 investigating primarily the effects on the acquirer's rivals. Instead of multiple industries, I choose to focus on a specific one in order to engage in an in-depth study of all firms belonging to that particular industry. The primary benefit of this approach is that it allows me to choose an industry that has experienced an easily identifiable exogenous shock which precedes a high period of M&A activity. The telecommunications industry, particularly after 1996, provides a unique platform to investigate the impact of acquisitions on rivals after an industry shock; Acquisitions were a response to an exogenous shock that came in the form of deregulation and were perceived to be a survival mechanism in these changing conditions. The severity of the conditions are best iterated by a practitioner describing the competitive environment in the telecommunications post-Telecom Act as largely consisting of two options: To merge or die (“Telcos merge for survival”, 1998).1 My main findings are threefold. First, I show that acquisitions have an adverse impact on the industry competitors by focusing on non-horizontal acquisitions. Second, those rivals that are more direct competitors of the acquirer defined as having similar size or providing primarily the same service as the acquirer experience a worse impact than an average competitor. This evidence is consistent with these acquisitions having the worst impact on the closer competitors of the acquirer. Third, this negative effect is attenuated for competitors that made prior acquisitions. In addition, competitors that become future acquirers are significantly better off than those that remain unmerged at the announcement of their rivals' acquisitions. Combined, these results suggest that in this environment being an acquirer was considered to be a more viable alternative than staying unmerged. The rest of the paper is structured as follows. Section 2 delineates the hypotheses. Section 3 summarizes the research design. Section 4 describes the data selection process and the methodology. Section 5 documents basic summary statistics of the sample and reports univariate statistics. Section 6 reports multivariate results, discusses possible theories for the initial results and attempts to identify the driving theory(ies) behind them. Section 7 concludes.

Acquisitions are strategic corporate investments of substantial magnitude. As such, they not only affect the acquirer itself but may have consequences for its rivals as well. If acquisitions are considered to be efficient responses to an industry-wide shock, this effect may be even more prevalent. Various theories predict positive rival returns at the announcement of acquisitions. These include increased monopoly power or anticipation of some of the rivals becoming future targets themselves. Other theories explain why we might observe negative returns to rivals, particularly after an industry shock. Among these are a loss of competitive edge to the rivals, signalling poor internal growth opportunities for the industry as a whole and anticipation of future bad acquisitions based on a theory of managerial herding. To study these effects, I focus on a particular industry (Telecom) that experienced an exogenous industry shock; deregulation. Telecom Act of 1996 forced the firms in this industry to respond to changing conditions by engaging in a flurry of M&A activity as a means to survival. Naturally, each acquisition impacted not only the acquirer but also its rivals making it an interesting platform to study the impact of various forces on rival returns. The results of the study show that the competitors of the acquirer earn significant negative returns at the announcement of non-horizontal acquisitions and that this negative impact is accentuated for those competitors that are of similar size and provide primarily the same service as the acquirer. Results also suggest that the negative impact experienced by competitors is driven by acquisitions in which the acquirer itself is earning negative abnormal returns and that this adverse effect is attenuated for competitors that made prior acquisitions. In addition, competitors that become future acquirers are significantly better off than those that remain unmerged at the announcement of their rivals' acquisitions. Results are consistent with the Competitive Advantage Hypothesis that posits acquisitions are a means of restructuring in a changing environment, yielding the acquirer a competitive edge, and thereby making their rivals' acquisitions costly for the non-merging competitors. Robustness checks determine that beyond other explanations such as signalling, anticipation and rational herding, there remains a negative strategic impact for firms in the telecom industry from the acquisitions that occur in their industry after the Telecom Act of 1996. The combined implication is that the shock and the subsequent response of firms in the form of a merger wave might be bad news for those firms that need to make acquisitions in order to compete effectively in this changing environment. However, among those that do not become targets, choosing not to make an acquisition definitely makes this effect much worse. The findings of this study raise concerns about interpreting the “success” or “motives” of mergers by simply observing that the acquirers lose money from their acquisitions. In a dynamic corporate environment where rivals' restructuring activities in the form of acquisitions may be costly, firms may have to choose between the lesser of the two evils and ultimately, the acquisitions may be the better choice. The results also provide evidence consistent with merger waves being efficient responses to an economic shock as opposed to being driven by distortionary motives. This emphasizes the need to include rivals' fates in our analyses of merger waves or acquisitions in general, in order to obtain a complete picture of the valuation consequences and presumed motives behind these decisions.