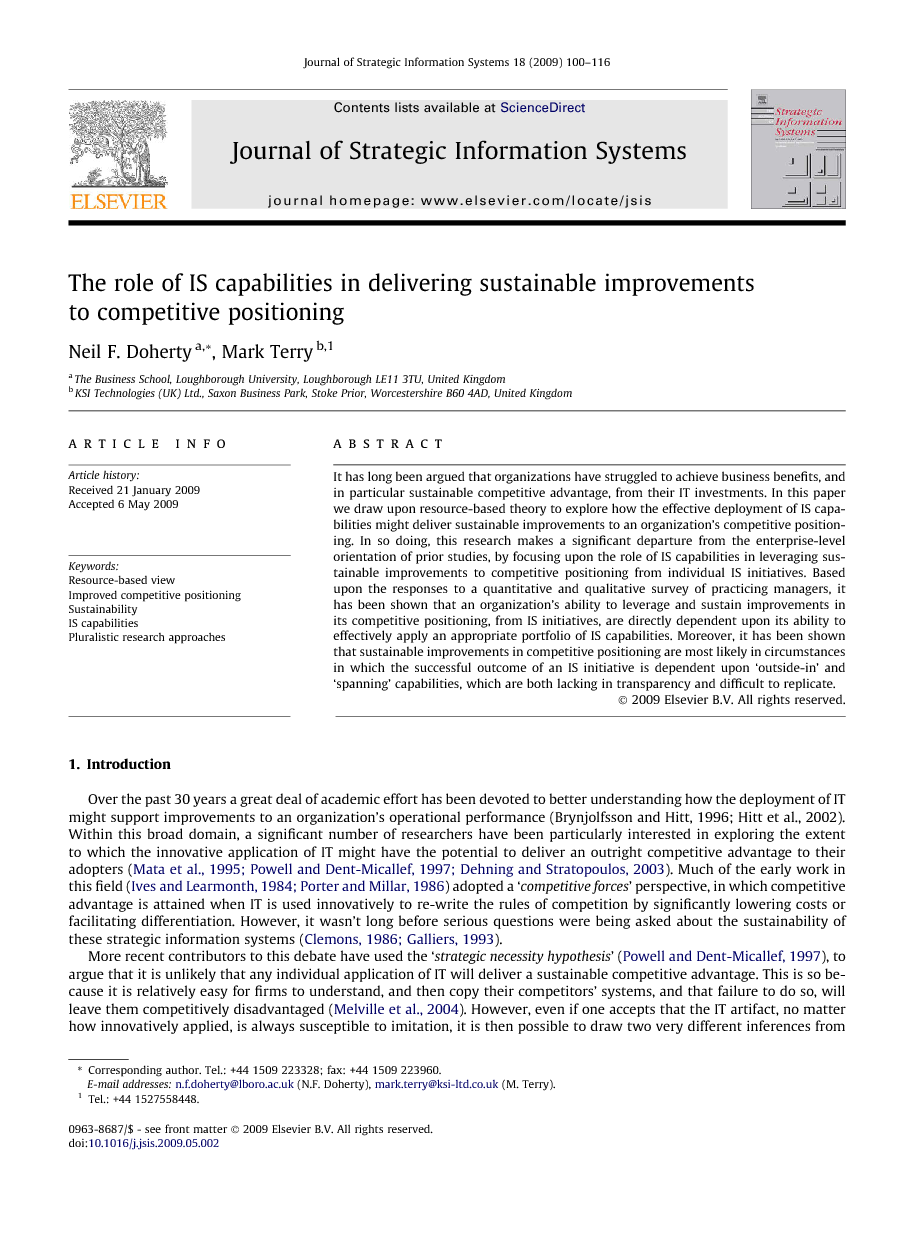 Over the past 30 years a great deal of academic effort has been devoted to better understanding how the deployment of IT might support improvements to an organization’s operational performance (Brynjolfsson and Hitt, 1996 and Hitt et al., 2002). Within this broad domain, a significant number of researchers have been particularly interested in exploring the extent to which the innovative application of IT might have the potential to deliver an outright competitive advantage to their adopters (Mata et al., 1995, Powell and Dent-Micallef, 1997 and Dehning and Stratopoulos, 2003). Much of the early work in this field (Ives and Learmonth, 1984 and Porter and Millar, 1986) adopted a ‘competitive forces’ perspective, in which competitive advantage is attained when IT is used innovatively to re-write the rules of competition by significantly lowering costs or facilitating differentiation. However, it wasn’t long before serious questions were being asked about the sustainability of these strategic information systems ( Clemons, 1986 and Galliers, 1993). More recent contributors to this debate have used the ‘strategic necessity hypothesis’ (Powell and Dent-Micallef, 1997), to argue that it is unlikely that any individual application of IT will deliver a sustainable competitive advantage. This is so because it is relatively easy for firms to understand, and then copy their competitors’ systems, and that failure to do so, will leave them competitively disadvantaged (Melville et al., 2004). However, even if one accepts that the IT artifact, no matter how innovatively applied, is always susceptible to imitation, it is then possible to draw two very different inferences from this insight. One group of authors would infer from the ‘strategic necessity hypothesis’, that IT is now such a readily accessible, affordable and homogenous commodity that has limited potential to deliver a sustainable competitive advantage ( Carr, 2003 and Thatcher and Pingry, 2007). By contrast, others would use the resource-based theory of the firm ( Wernerfelt, 1984 and Barney, 1991) to contend that it is possible to gain a strategic advantage if the adoption of information systems is supported through the deployment of an appropriate portfolio of complementary resources and capabilities (Wade and Hulland, 2004). From these contrasting views, a very lively debate has erupted, within the information systems community, as to whether IT can provide a differential advantage to individual firms (Bhatt and Grover, 2005), or whether because of its ubiquity, ‘IT doesn’t matter’ (Carr, 2003). Against this backdrop, the broad aim of this paper is to draw upon resource-based theory, to explore whether it is possible to identify a portfolio of IS-related resources/capabilities that are necessary to facilitate the delivery of sustainable improvements in competitive positioning from the application of business IT. However, in so doing, we make a significant departure from previous studies by using individual IS initiatives as the unit of analysis, and explore the competitive impacts of IT at the process level. To this end, the remainder of the paper proceeds as follows. The next section presents a critical review of the literature, from which the study’s specific objectives are derived. We then develop a conceptual framework, before presenting a review of the research methods that were applied to collect data to test the model. The framework then provides the basis for a mixed, quantitative and qualitative analysis, which is presented in the Section 5. We conclude by summarizing the findings and limitations of our study, and by proposing an agenda for future research.