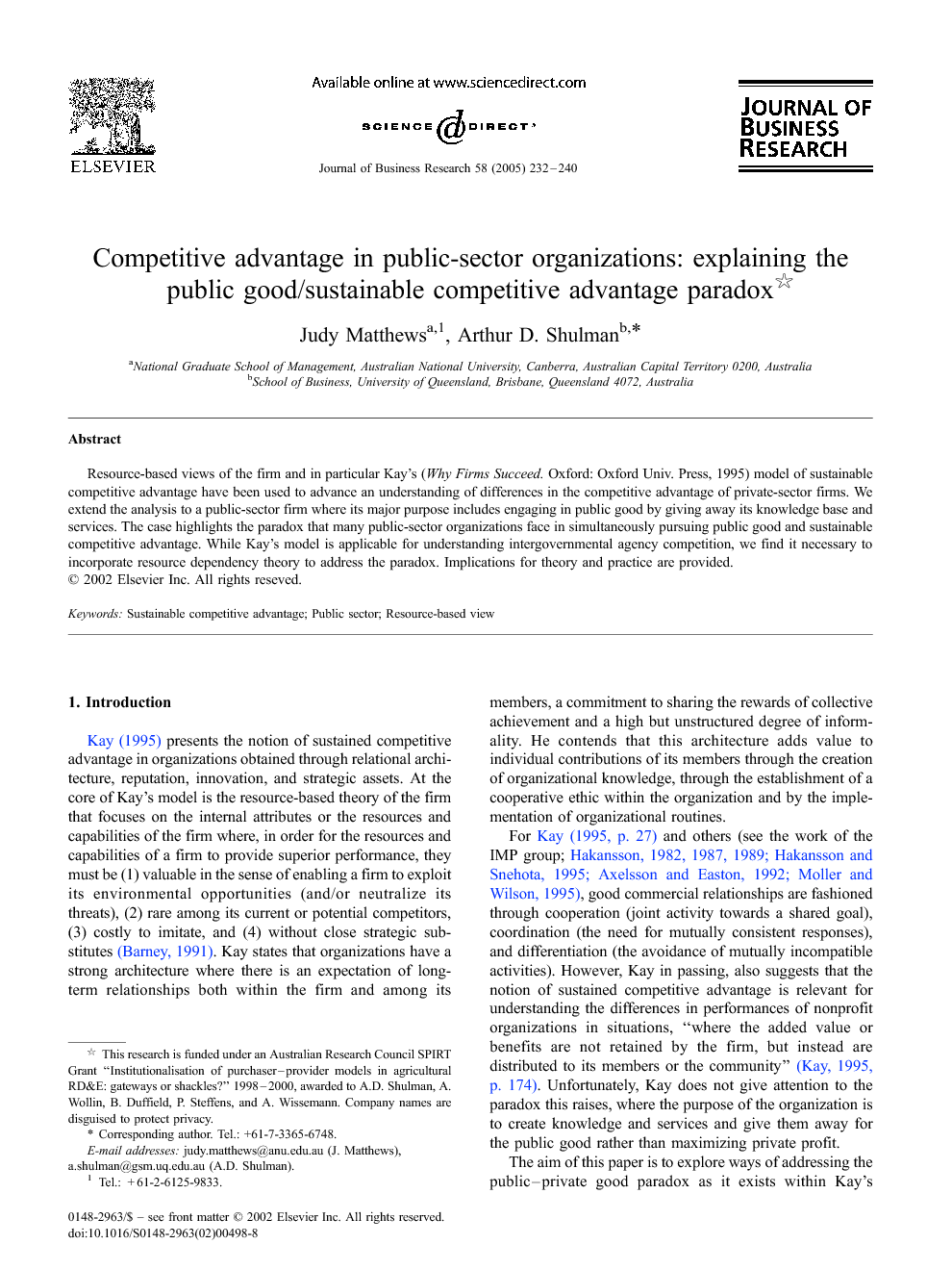 Resource-based views of the firm and in particular Kay's (Why Firms Succeed. Oxford: Oxford Univ. Press, 1995) model of sustainable competitive advantage have been used to advance an understanding of differences in the competitive advantage of private-sector firms. We extend the analysis to a public-sector firm where its major purpose includes engaging in public good by giving away its knowledge base and services. The case highlights the paradox that many public-sector organizations face in simultaneously pursuing public good and sustainable competitive advantage. While Kay's model is applicable for understanding intergovernmental agency competition, we find it necessary to incorporate resource dependency theory to address the paradox. Implications for theory and practice are provided.

Kay (1995) presents the notion of sustained competitive advantage in organizations obtained through relational architecture, reputation, innovation, and strategic assets. At the core of Kay's model is the resource-based theory of the firm that focuses on the internal attributes or the resources and capabilities of the firm where, in order for the resources and capabilities of a firm to provide superior performance, they must be (1) valuable in the sense of enabling a firm to exploit its environmental opportunities (and/or neutralize its threats), (2) rare among its current or potential competitors, (3) costly to imitate, and (4) without close strategic substitutes (Barney, 1991). Kay states that organizations have a strong architecture where there is an expectation of long-term relationships both within the firm and among its members, a commitment to sharing the rewards of collective achievement and a high but unstructured degree of informality. He contends that this architecture adds value to individual contributions of its members through the creation of organizational knowledge, through the establishment of a cooperative ethic within the organization and by the implementation of organizational routines. For Kay (1995, p. 27) and others (see the work of the IMP group; Hakansson, 1982, Hakansson, 1987, Hakansson, 1989, Hakansson and Snehota, 1995, Axelsson and Easton, 1992 and Moller and Wilson, 1995, good commercial relationships are fashioned through cooperation (joint activity towards a shared goal), coordination (the need for mutually consistent responses), and differentiation (the avoidance of mutually incompatible activities). However, Kay in passing, also suggests that the notion of sustained competitive advantage is relevant for understanding the differences in performances of nonprofit organizations in situations, “where the added value or benefits are not retained by the firm, but instead are distributed to its members or the community” (Kay, 1995, p. 174). Unfortunately, Kay does not give attention to the paradox this raises, where the purpose of the organization is to create knowledge and services and give them away for the public good rather than maximizing private profit. The aim of this paper is to explore ways of addressing the public–private good paradox as it exists within Kay's notion of sustained competitive advantage, when it is applied to public-sector organizations. We structure this paper by first describing the paradox. We then systematically apply Kay's sustainable competitive advantage framework of architecture, reputation, innovation, and strategic assets to identify the specific capabilities of the organization. We investigate the power of his framework to capture the effectiveness of a large public-sector R&D organization, where innovation is its core business. The analysis illustrates the paradox as well as the need to integrate resource dependency considerations into Kay's notion of sustained competitive advantage if it is to be a useful framework for advancing public-sector applications.

The above case illustrates that Kay's notions of sustainable competitive advantage based on distinct capabilities have some resonance with public-sector R&D organizations. The roles of public-sector science organizations are not only to carry out RD&E with client groups and with industry bodies but also to compete with other public-sector organizations and university-based research groups for funds. However, it does not easily account for government's role in freely giving away its knowledge to create new industries or to engage in high risk and low immediate return on investment activities that address market failure nor does it adequately capture the all too common situation where an organization does not have control of its destiny, but is dependent upon the whims of an external body, in this case a ministerial cabinet. In both the competitive advantage and IMP frameworks, the importance of relationships with other firms and networks of firms as resources is recognized, but the case suggests that recognition alone does not provide an organization with sufficient understanding of the constraints that the political and economic resource dependencies place on what its business is and the ways it can best structure itself to achieve business objectives. As highlighted in resource dependency theory, because organizations are not self-contained or self-sufficient, the organization's dependence on its environment makes the external constraint and control of organizational behaviour both possible and almost inevitable (Pfeffer and Salancik, 1978). Frooman (1999) extends the resource dependency argument by viewing power as an attribute of the relationship between the actors. Resource dependence exists “when one actor is supplying another with a resource that is marked by (1) concentration (suppliers are few in number), (2) controllability, (3) nonmobility, (4) nonsubstitutability or essentiality” (Frooman, 1999, p. 195). All of these attributes can be easily applied to the situation of ‘Sun State’. For Frooman (1999), the essentiality of a resource is itself a function of two factors: relative magnitude of exchange and criticality. For public-sector organizations, their critical dependency on ministerial cabinet decisions is legendary and tactics for shaping it are well documented in the long-running episodes of “Yes Minister.” We suggest that the inclusion of resource dependency considerations (Pfeffer and Salancik, 1978) where differences in the dependence of a firm on its external stakeholders for resources provides one way to account for differences in the performance of public-sector firms managing the competitive advantage paradox. It also helps address the issue of how firms can succeed in not only being guided by a profit motive, but by other triple bottom-line considerations as serving community and the environment—for these objectives are those held by these controlling external stakeholders whose favour is essential. In the case of Sun State, the shifts in structures displayed in Fig. 1 show the changes in dependencies and relationships over time. Prior to 1997, funds for R&D came from government sources with smaller amounts from external sources such as R&D corporations. During 1997–1999 and formation of institutes or business groups around one group of commodities, the business units were working as financial entities, structures were more commercial in focus each with a director, business manager, and board of industry representatives and much closer links with industry were developed. At this time, while the major source of funds was the government, R&D funds from nongovernment sources had increased. After 1999, the business groups were brought together in a form of consortium maintaining their business focus but building synergies between units. The structural changes can be explained in terms of changing resource dependencies. It is these dependencies that limit the areas in which competition in the public sector is allowed and at times encouraged and where Kay's notions of strategic competitive advantage are applicable. This case illustrates this need to include resource dependency contingencies when managing a public-sector organization. However, the lesson is also likely to hold for firms in the private sector in situations where there are restrictions on what businesses a firm can strategically collaborate with, for instance, when there are single suppliers, where there is no possibility of replacement, managers in both public- and private-sector firms focus on sustainable competitive advantage, using the resources and capabilities of their organization and their coordination and application. While Kay's model articulates the components of this advantage including the internal and external relationships and the network of relationships as the architecture that it frames, managers also use their knowledge of resource dependencies of their organizations in choosing their objectives and means of obtaining them.