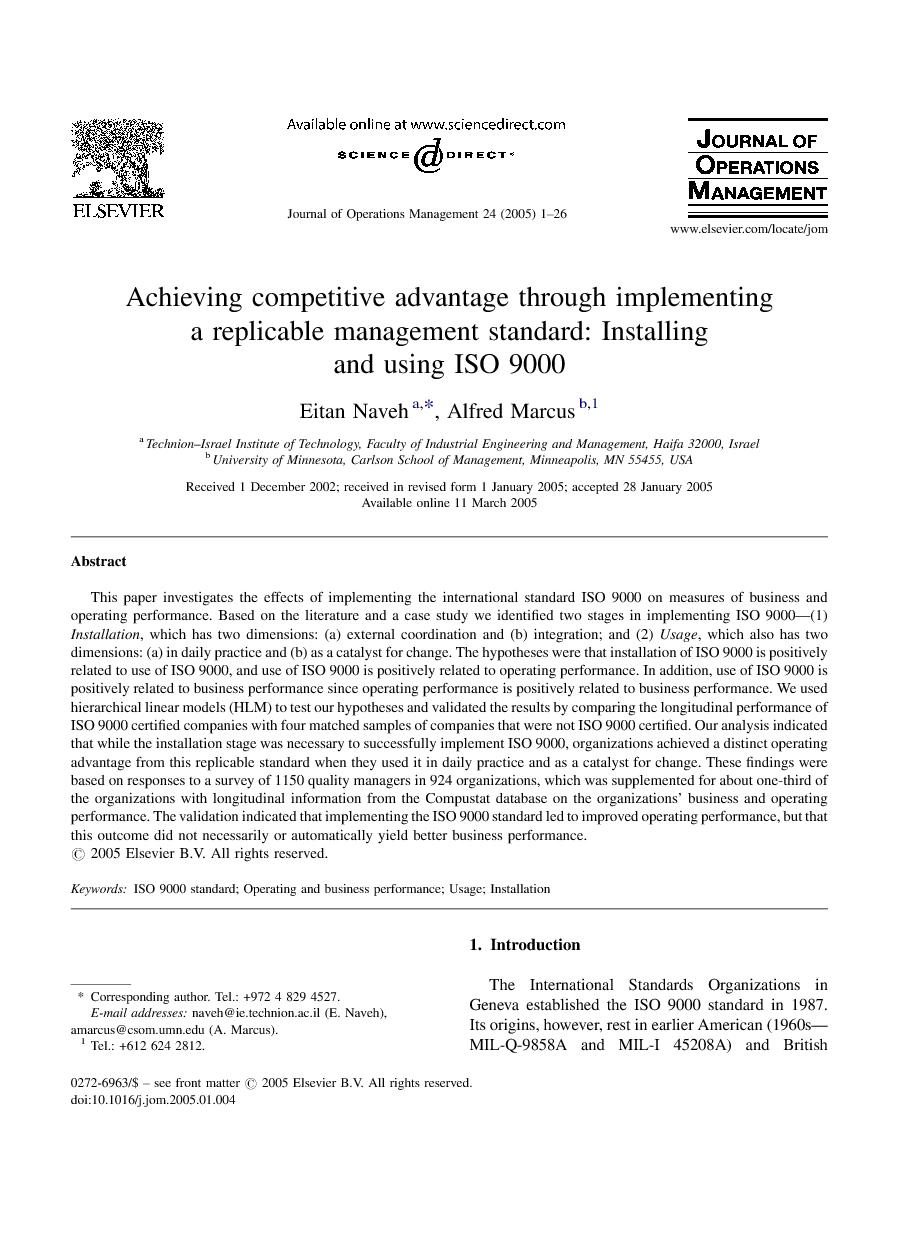 The International Standards Organizations in Geneva established the ISO 9000 standard in 1987. Its origins, however, rest in earlier American (1960s—MIL-Q-9858A and MIL-I 45208A) and British standards (BS 5750). By the year 2000, more than 100,000 organizations worldwide were ISO 9000 certified and over 100 countries had adopted this standard (The International Standards Organization, 2000). Management standards, such as ISO 9000, are a subset of a broader category of voluntary management practices, often referred to as administrative innovations (Brunsson et al., 2000). The ISO 9000 standard requires that firms have in-house standardized and replicable routines and procedures for product design, manufacture, delivery, service and support, but whether implementation of such a standard is helpful to organizations is not known with certainty (Anderson et al., 1999 and Greve, 1999). Organizational analysts have identified implementation failures as a main reason that organizations have not benefited from practices such as ISO 9000 (Nutt, 1986 and Klien and Sorra, 1996). Abrahamson, 1991, Abrahamson, 1996 and Abrahamson, 1997 sees the process of implementation as akin to fads and fashions; managers implement such practices in the same ways that people make decisions about the length of a skirt or the width of a tie—as a consequence of being persuaded by glitzy rhetoric that exploits their vulnerabilities and psychological needs. According to Abrahamson, 1991, Abrahamson, 1996 and Abrahamson, 1997, implementation is a social construction that does not narrow real performance gaps. Nevertheless, Collis and Montgomery (1997) suggest that the implementation of practices such as ISO 9000 can raise organizational performance and result in real competitive advantage. Quality standards, such as ISO 9000, have continually evolved and been refined over time and are supposed to offer a competitive factor in many industries (Cole, 1999). However, since knowledge of ISO 9000 is public (Matusik and Hill, 1998) and implementation of the practice aims to create greater homogeneity among organizations (Brunsson et al., 2000), it is debatable if ISO 9000 constitutes a competitive factor. As Barney (1986) maintains, competitive advantage arises from the differences among firms (heterogeneity), but if all companies implement ISO 9000 in the same way, can a particular company derive a special benefit? We argue that competitive advantage can be gained from implementing a replicable management standard, such as ISO 9000, if implementation is understood not as a discrete and homogenous industry-wide phenomenon, but if variations in this process are considered (Lewis and Seibold, 1993, Westphal et al., 1997 and Meyer and Goes, 1988). For our study, we built a model for implementing ISO 9000, which takes into account company-specific variations. We used information from a survey of 1150 managers as well as data collected from the Compustat database about organizations that are ISO 9000 certified and four matching samples of non-ISO 9000 certified organizations whose characteristics otherwise match the ISO 9000 certified organizations. We then tested this model to determine the extent to which variations in implementation have an effect on operating and business performance.

In this paper, we identified two stages in implementing the ISO 9000 replicable management standard. Each stage has two dimensions. We found that depending on how a company approached these stages it could reap competitive gain in respect to its operating performance. The first stage was Installation, with the dimensions of external coordination and integration. The second stage was Usage, with the dimensions of daily practice and as a catalyst for change. A case study that we conducted illustrated these concepts and showed how a company could take an externally imposed requirement such as ISO 9000 and draw on it to create a unique quality system that could yield benefits. At TIC, ISO 9000 was installed by means of external coordination with customers and suppliers, and integration with existing practices. It was used in daily practice and as a catalyst for change. One quality initiative followed another until an elaborate overall quality system had been developed. In this way, ISO 9000 became the springboard for these developments and for the gains that followed. Based on the case study and a review of the literature, we generated our hypotheses, arguing that Installation is associated with Usage and that Operating Performance partially mediated the effect of Usage on Business Performance. The hypotheses were tested by means of a survey supplemented by data we collected from the Compustat database, and by matching four samples of non-certified ISO 9000 companies. The results led us to conclude that, when ISO 9000 was used in daily practice and as a catalyst for change, the organization could achieve a distinct operating advantage from implementation. The HLM analyses and the four control samples of non-ISO 9000 companies also suggested that ISO 9000 led to distinct operating performance improvement but that this better operating performance did not necessarily lead to better business performance. A paradox resides at the center of our findings and the theory upon which they were based. Structure and routine—needed to implement a replicable standard such as ISO 9000—are the foundations for the abandonment of such structure and routine (that is, they are a catalyst for change). Without structure and routine as a foundation, an organization has no footing from which to depart and set out on its own. Our investigation leads us to posit that both adherence to an externally imposed standard, and altering and moving away from it, after thoroughly incorporating it, are needed. This is an intriguing concept that should stimulate further research. Future longitudinal work would be especially valuable and it should be done in regard to other management practices (for example, less formally defined practices such as TQM), as a limitation of our paper is that the theory and empirical analysis we conducted were restricted to ISO 9000. Other limitations are that though we use longitudinal financial data and questionnaire responses, we can only establish correlations and not causal relationships. Theoretically, plausible alternative explanations might exist for our findings. For instance, it is possible that Installation and Usage are just indicators of common good business practices. Another possibility is that a catalyst for change has an optimal level such that there is an inverse U-shaped relationship between catalyst for change and performance. Our measure for catalyst for change focused almost exclusively on aspects that are likely to enhance performance and it is possible that firms depart from ISO 9000s original rules in ways that do not enhance performance; for example, by increasing quality at too high a cost or beyond the level desired by customers or by initiating new quality programs that do not enhance quality. Our study does not explain why some organizations choose not to install or use ISO 9000, while others do. The market signaling effect of ISO 9000 needs further investigation. It would be worthwhile to further explore the extent to which ISO 9000 and other management standards are adopted fully or only symbolically. Favourable organizational conditions could lead to better implementation. However, in this study we did not have the data to measure contingencies in firms that could influence their decision to implement ISO 9000. These topics should be taken up in further research.