عنوان انگلیسی
Accounting for competitive advantage: The resource-based view of the firm and the labour theory of value
دانلود فوری مقاله + سفارش ترجمه 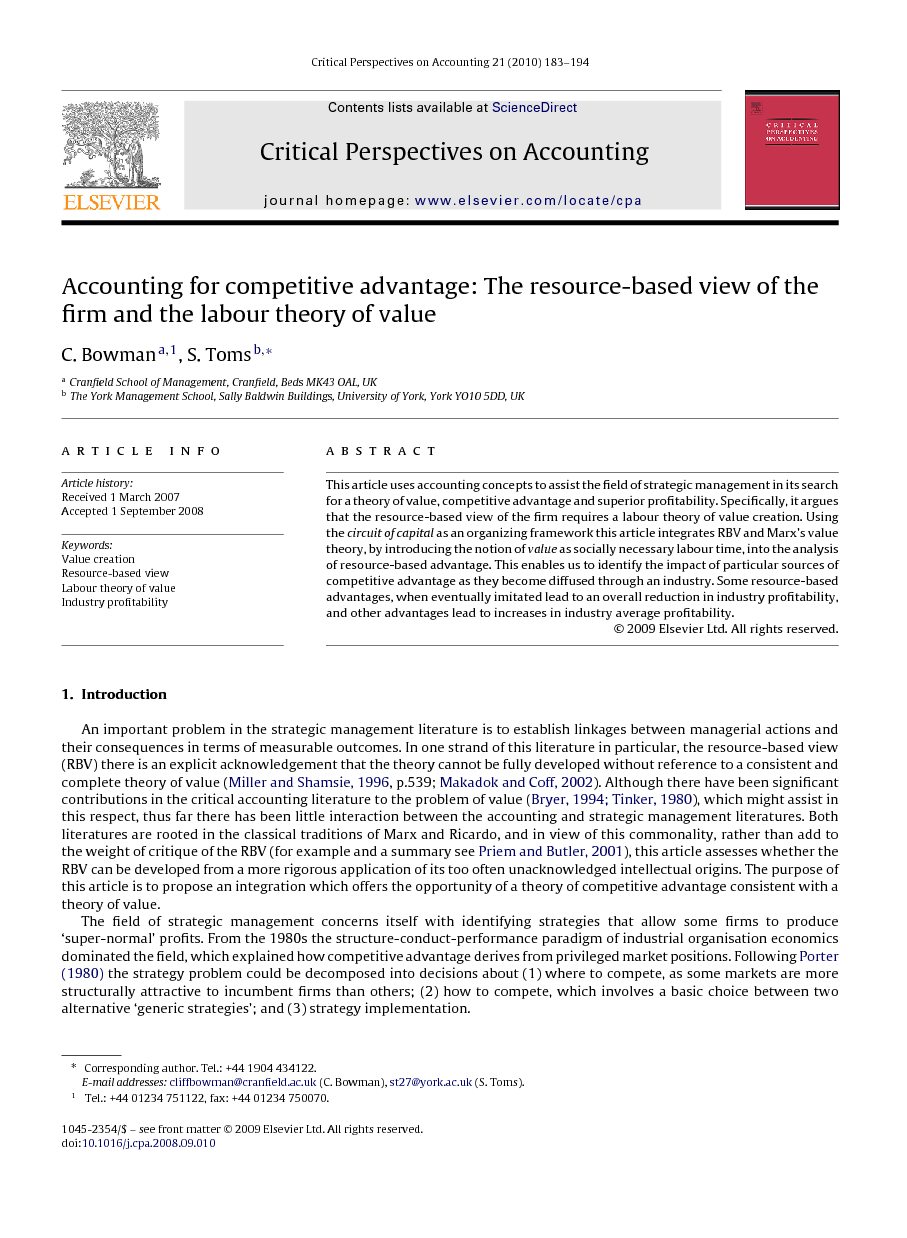 This article uses accounting concepts to assist the field of strategic management in its search for a theory of value, competitive advantage and superior profitability. Specifically, it argues that the resource-based view of the firm requires a labour theory of value creation. Using the circuit of capital as an organizing framework this article integrates RBV and Marx's value theory, by introducing the notion of value as socially necessary labour time, into the analysis of resource-based advantage. This enables us to identify the impact of particular sources of competitive advantage as they become diffused through an industry. Some resource-based advantages, when eventually imitated lead to an overall reduction in industry profitability, and other advantages lead to increases in industry average profitability.

In this article we have used insights from Marx's economics to inform RBV, and RBV in turn has enabled us to develop certain aspects of Marx's schema. We have seen that the process of accumulation, which is at the heart of Marx's analysis and which we have explored in the circuit of capital, is capable of representing and accounting for many of the phenomena developed in the RBV. By introducing Marx's concept of value we have been able to explore the effects on firm's and industries of particular types of resource developments, how the value created from such developments is split between employees, managers and shareholders and how accounting mediates the split, and the impact on industry profitability if these are imitated. Direct empirical testing of the relationships outlined is possible for example by using realised profit rates to ascertain the most efficient firm and hence the socially necessary labour in any given industry sector. Moreover the categories used by Marx above have been shown to be consistent with conventional accounting categories (Bryer, 2005). Profit rates can be mapped over time for firms and industries, and approximations to the value constructs c and vv can be made using cost information. But further theoretical work is needed to explore the effects of introducing market dynamics, rates of resource diffusion, and entry barriers into the theory. Finally, there is a macro-perspective that could be developed to consider these processes and tendencies at a system level. Even so, it is hoped that this article represents a radicalisation of strategy and will assist in the development of future discussions of critical strategy as well as critical accounting.