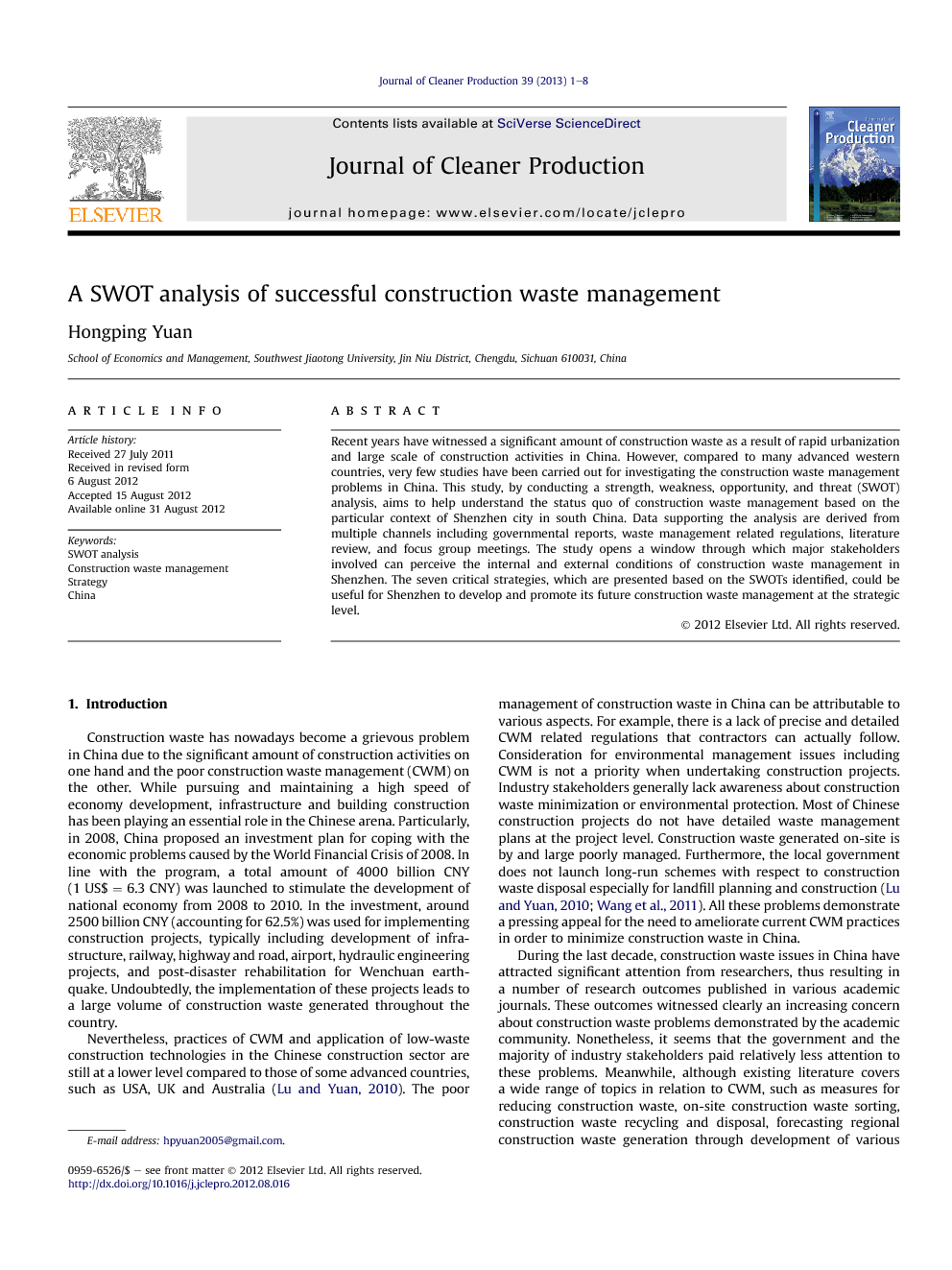 Construction waste has nowadays become a grievous problem in China due to the significant amount of construction activities on one hand and the poor construction waste management (CWM) on the other. While pursuing and maintaining a high speed of economy development, infrastructure and building construction has been playing an essential role in the Chinese arena. Particularly, in 2008, China proposed an investment plan for coping with the economic problems caused by the World Financial Crisis of 2008. In line with the program, a total amount of 4000 billion CNY (1 US$ = 6.3 CNY) was launched to stimulate the development of national economy from 2008 to 2010. In the investment, around 2500 billion CNY (accounting for 62.5%) was used for implementing construction projects, typically including development of infrastructure, railway, highway and road, airport, hydraulic engineering projects, and post-disaster rehabilitation for Wenchuan earthquake. Undoubtedly, the implementation of these projects leads to a large volume of construction waste generated throughout the country. Nevertheless, practices of CWM and application of low-waste construction technologies in the Chinese construction sector are still at a lower level compared to those of some advanced countries, such as USA, UK and Australia (Lu and Yuan, 2010). The poor management of construction waste in China can be attributable to various aspects. For example, there is a lack of precise and detailed CWM related regulations that contractors can actually follow. Consideration for environmental management issues including CWM is not a priority when undertaking construction projects. Industry stakeholders generally lack awareness about construction waste minimization or environmental protection. Most of Chinese construction projects do not have detailed waste management plans at the project level. Construction waste generated on-site is by and large poorly managed. Furthermore, the local government does not launch long-run schemes with respect to construction waste disposal especially for landfill planning and construction (Lu and Yuan, 2010; Wang et al., 2011). All these problems demonstrate a pressing appeal for the need to ameliorate current CWM practices in order to minimize construction waste in China. During the last decade, construction waste issues in China have attracted significant attention from researchers, thus resulting in a number of research outcomes published in various academic journals. These outcomes witnessed clearly an increasing concern about construction waste problems demonstrated by the academic community. Nonetheless, it seems that the government and the majority of industry stakeholders paid relatively less attention to these problems. Meanwhile, although existing literature covers a wide range of topics in relation to CWM, such as measures for reducing construction waste, on-site construction waste sorting, construction waste recycling and disposal, forecasting regional construction waste generation through development of various quantitative models (Wang et al., 2011; Hao et al., 2007; Formoso et al., 2002), there is limited research that can be used to assist in strategically planning CWM in a given region. Generally, strategic analysis and planning of CWM at the regional level can contribute to CWM practices of a particular region in three major dimensions. Firstly, it allows the government and industry stakeholders to further their understanding of current CWM situation in the region under study. Secondly, it enables the identification of main problems that are faced by the construction industry, based on which effective measures can be presented for improvements. Finally, the analytic results can be useful information to guide the development of CWM in the region in both the short- and long-run. Therefore, this study aims at analyzing CWM at the regional level in China. A SWOT (Strength, Weakness, Opportunity and Threat) analysis approach is employed to achieve the purpose. The analysis is based on an empirical investigation of CWM in Shenzhen city of south China. The remainder of the paper is organized as follows: Section 2 is an introduction of the research methodology adopted; Section 3 is a thorough SWOT analysis of CWM in Shenzhen; Section 4 is a framework incorporating seven critical strategies that can be used to help address the CWM problems in the region; and finally we draw the main conclusions.

Through carrying out a thorough SWOT analysis, the internal and external conditions of CWM in Shenzhen of south China were clearly presented. The results suggest that while developing its CWM, Shenzhen should build on its strengths including good geographic location and strong awareness of the local government about promoting CWM. Further, Shenzhen has played a leading role in promulgating CWM related regulations among Chinese cities. In the meanwhile, Shenzhen presents some weaknesses, which mainly involve incomplete CWM related regulations, low proportion of on-site construction waste sorting, poor construction waste reduction, and lack of systemic planning of construction waste recycling facilities. These weaknesses would largely hinder its future CWM development. The findings also present some major opportunities that Shenzhen can exploit, as well as some threats that need to be mitigated in the future. Generally, Shenzhen's special status as a SEZ in China provides a good chance for the region to promote its CWM practice. The strong appeal for reducing construction waste throughout China offers a good external opportunity to embrace environmentally friendly practices in the construction industry. Furthermore, extensive supports of the local government and industry associations also form a concrete foundation for promoting CWM in Shenzhen. Nevertheless, threats to successful CWM are also considerable, which mainly encompass limited landfills for handling generated construction waste, low charge for landfilling construction waste, immature market for trading recycled construction materials, and insufficient funds for conducting CWM research. Based on the SWOTs identified, seven critical strategies for improving the CWM situation in Shenzhen were proposed. These strategies include: S1-establishing a mechanism for determining the responsibility of various government departments involved, S2-promulgating detailed CWM regulations, S3-investigating amounts of construction waste generated in Shenzhen and planning construction waste facilities properly, S4-implementing CWM throughout the life cycle of construction projects, S5-implementing a pilot program of applying recycled construction materials, S6-establishing a construction waste research institute in Shenzhen, and S7-raising CWM awareness via training and promotion activities. The identified SWOTs are critical in contributing to successful CWM in Shenzhen. They may also be useful references for other Chinese regions which intend to enhance the CWM. The strategies proposed could be utilized by decision-makers in Shenzhen to plan its future CWM development.