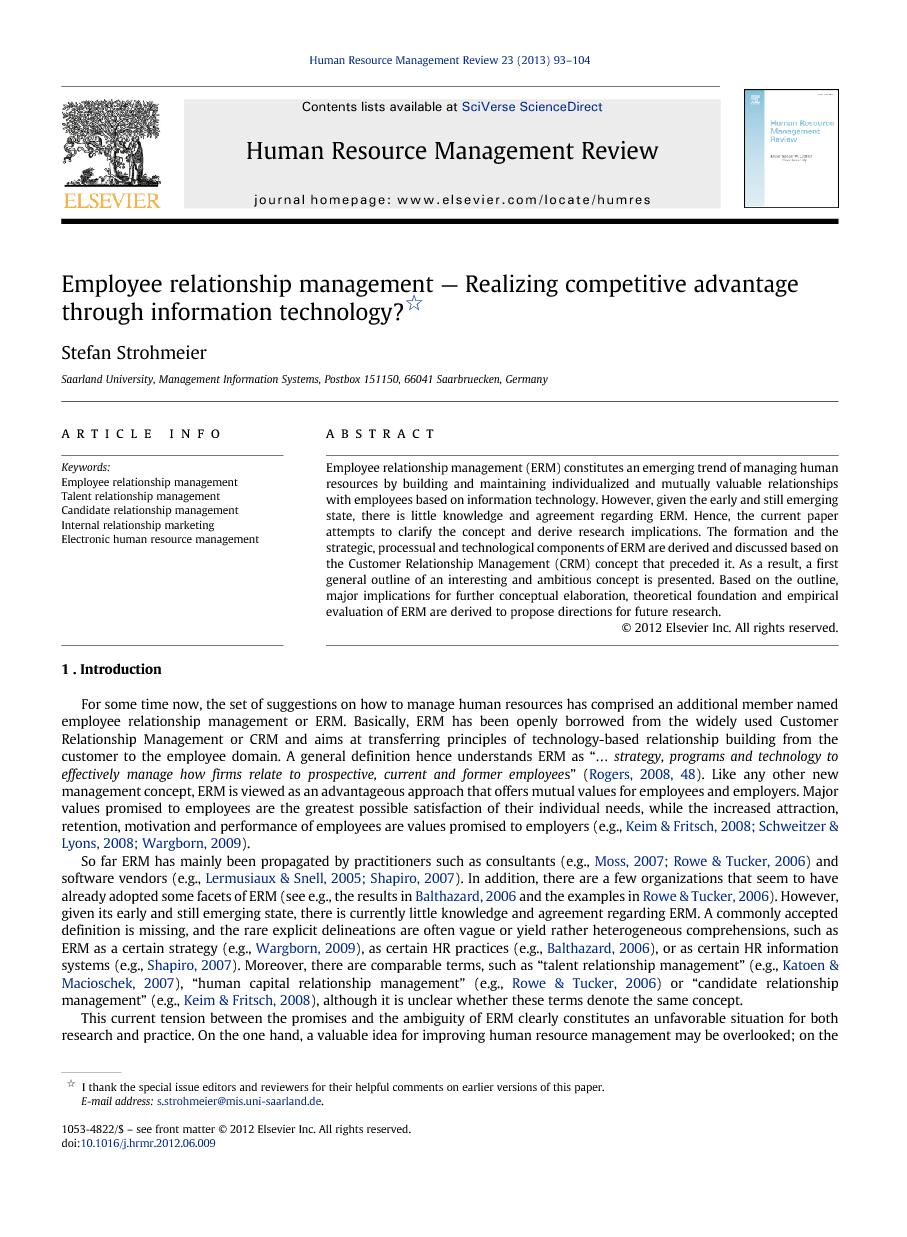 Employee relationship management (ERM) constitutes an emerging trend of managing human resources by building and maintaining individualized and mutually valuable relationships with employees based on information technology. However, given the early and still emerging state, there is little knowledge and agreement regarding ERM. Hence, the current paper attempts to clarify the concept and derive research implications. The formation and the strategic, processual and technological components of ERM are derived and discussed based on the Customer Relationship Management (CRM) concept that preceded it. As a result, a first general outline of an interesting and ambitious concept is presented. Based on the outline, major implications for further conceptual elaboration, theoretical foundation and empirical evaluation of ERM are derived to propose directions for future research.

For some time now, the set of suggestions on how to manage human resources has comprised an additional member named employee relationship management or ERM. Basically, ERM has been openly borrowed from the widely used Customer Relationship Management or CRM and aims at transferring principles of technology-based relationship building from the customer to the employee domain. A general definition hence understands ERM as “… strategy, programs and technology to effectively manage how firms relate to prospective, current and former employees” (Rogers, 2008, 48). Like any other new management concept, ERM is viewed as an advantageous approach that offers mutual values for employees and employers. Major values promised to employees are the greatest possible satisfaction of their individual needs, while the increased attraction, retention, motivation and performance of employees are values promised to employers (e.g., Keim and Fritsch, 2008, Schweitzer and Lyons, 2008 and Wargborn, 2009). So far ERM has mainly been propagated by practitioners such as consultants (e.g., Moss, 2007 and Rowe and Tucker, 2006) and software vendors (e.g., Lermusiaux and Snell, 2005 and Shapiro, 2007). In addition, there are a few organizations that seem to have already adopted some facets of ERM (see e.g., the results in Balthazard, 2006 and the examples in Rowe & Tucker, 2006). However, given its early and still emerging state, there is currently little knowledge and agreement regarding ERM. A commonly accepted definition is missing, and the rare explicit delineations are often vague or yield rather heterogeneous comprehensions, such as ERM as a certain strategy (e.g., Wargborn, 2009), as certain HR practices (e.g., Balthazard, 2006), or as certain HR information systems (e.g., Shapiro, 2007). Moreover, there are comparable terms, such as “talent relationship management” (e.g., Katoen & Macioschek, 2007), “human capital relationship management” (e.g., Rowe & Tucker, 2006) or “candidate relationship management” (e.g., Keim & Fritsch, 2008), although it is unclear whether these terms denote the same concept. This current tension between the promises and the ambiguity of ERM clearly constitutes an unfavorable situation for both research and practice. On the one hand, a valuable idea for improving human resource management may be overlooked; on the other hand, an insubstantial fad may be pursued. Hence, there is a need for conceptual clarification of ERM to decide whether and how it should be considered in future research and practice. The current paper therefore aims at offering a clarification of the concept by generating an outline of ERM and, subsequently, deriving implications for research. In the outline, the formation and the components of ERM are discussed and subsequently summarized in a synopsis. Given that ERM constitutes a frank analogy of CRM, these parts are derived from and compared with the formation and components of CRM. Subsequently, the conceptual elaboration, the theoretical foundation and the empirical evaluation are substantiated as major implications to offer guidance for future research.

Employee relationship management constitutes an emerging trend in practice, which so far was characterized by a tension between promises and ambiguity of concept. The current paper hence aimed at the reduction of ambiguity by elaborating a basic outline of the concept and by deriving major implications for future research. Starting with the formation of the concept, it could be clarified that ERM is a response to increased labor market pressures and increased information technology potentials. By subsequently elaborating on the conceptual components ERM could be portrayed as the strategy of building and long-term maintaining individualized, mutually valuable relationships with selected former, current and potential employees, which is operationalized through collaborative, operational and analytical processes and realized through the collaborative, operational and analytical functionalities of information systems. As a result, the outline of an interesting and ambitious concept of managing human resources electronically could be presented. ERM hence might well offer a systematic way for HRM to cope with the increasingly strained labor markets of the future. However, before actually recommending the concept for application, future research has to solve the interrelated tasks of conceptual elaboration, theoretical foundation and empirical evaluation of ERM, as elucidated in the discussion of implications. This paper hence might form a starting point for more research and more insights in ERM.