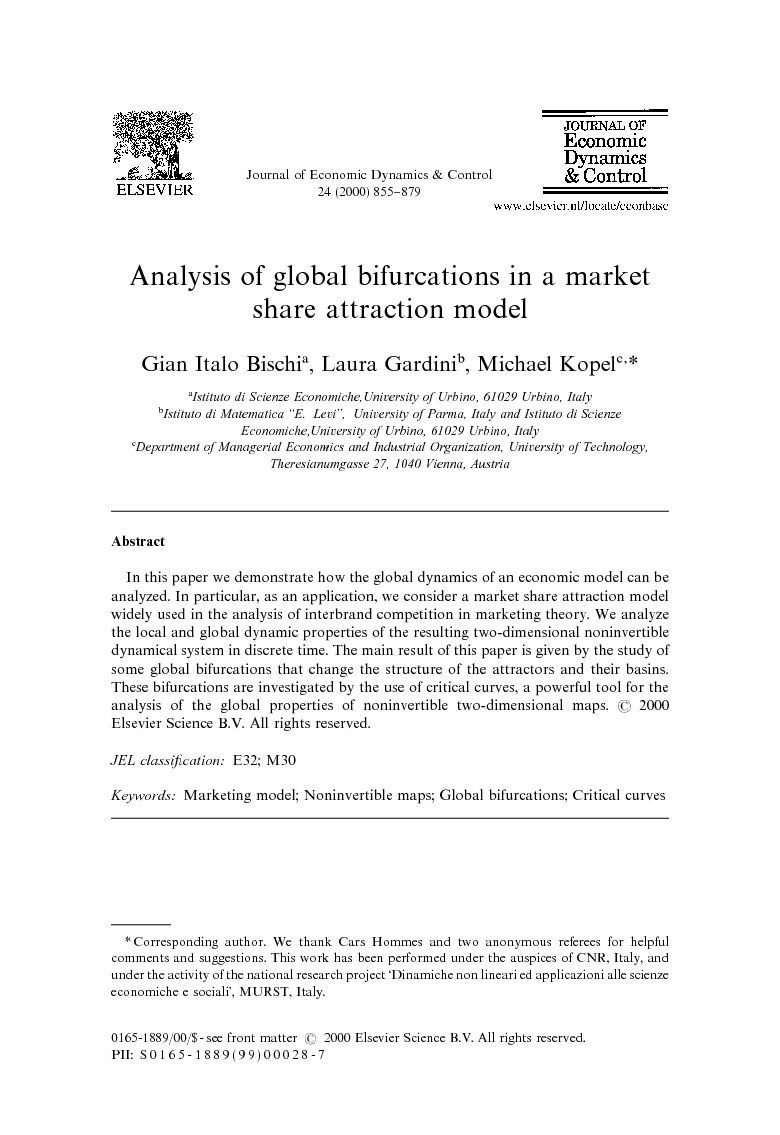 In this paper we demonstrate how the global dynamics of an economic model can be analyzed. In particular, as an application, we consider a market share attraction model widely used in the analysis of interbrand competition in marketing theory. We analyze the local and global dynamic properties of the resulting two-dimensional noninvertible dynamical system in discrete time. The main result of this paper is given by the study of some global bifurcations that change the structure of the attractors and their basins. These bifurcations are investigated by the use of critical curves, a powerful tool for the analysis of the global properties of noninvertible two-dimensional maps.

For many years the dynamics of economic systems have been studied by focusing on stable equilibrium behavior. New results in the theory of nonlinear dynamical systems make us aware, however, that fluctuations over time are quite common and may be due to the nonlinear relationships between the variables of the system and not to exogenous stochastic influences. More recently, this viewpoint has been accepted by economists and operations researchers, management scientists and organization theorists alike (see, e.g., Day, 1994; Hommes, 1991; Kopel 1996a; Parker and Stacey, 1994; Thietart and Forgues, 1995). The question usually addressed in the economics literature is that of the creation of complex attractors through sequences of local bifurcations. The study of the global bifurcations that cause qualitative changes of the attractors and their basin of attraction has been rather neglected (for recent work on global phenomena in economic models, see Gardini 1992 and Gardini 1993; Brock and Hommes, 1997; Bischi et al., 1998). Our work moves a step towards this less explored direction. In this paper we show how the global dynamics of an economic model can be analyzed by the study of some global bifurcations that change the shape of the chaotic attractors and the structure of their basins of attraction, as some parameters of the model are varied. These bifurcations are analyzed by the use of critical curves, a powerful method for the investigation of the global properties of noninvertible two-dimensional maps. To have a particular application at hand we consider an attraction model which is widely used in marketing theory, where marketing efforts for the different brands determine their market shares. This economic model is interesting because of the global properties that have not been yet sufficiently explored. It is also particularly apt for our purpose, namely to introduce some concepts for the analysis of two-dimensional discrete dynamical systems by analogies to the well-known one-dimensional quadratic map. The paper is organized as follows. In Section 2 we present the market share attraction model with two competing brands, and in Section 3 we give some general properties of the resulting two-dimensional noninvertible map. The existence of a unique nontrivial steady state is proved and the creation of complex attractors around the fixed point is numerically evidenced. The concepts of critical curves and basin boundaries are introduced and applied to our model. The main results are given in Section 4, where we analyze some global bifurcations which cause qualitative changes in the structure of the attractors and of their basins as some parameters are allowed to vary. The bifurcations that change the structure of the basins are characterized as contact bifurcations due to tangencies between the critical curves of the noninvertible map and the basins’ boundaries, and those changing the structure of the chaotic sets are characterized as homoclinic bifurcations due to a contact between arcs of critical curves and the stable manifold of the saddle fixed point. We end the paper with some conclusions in Section 5.

In this paper we investigated the global properties of a market share attrac- tion model of interbrand competition by the method of critical curves. In contrast to existing studies of economic models, which primarily focus on the local dynamics and demonstrate the possibility of cyclic and erratic # uctuations by means of computer simulation, our work gives a fairly general investigation of the global dynamical behavior by a study of the properties of the attractors and of their basins. For the model analyzed in this paper the main qualitative changes of the global structure of the basins can be obtained by using the concept of critical curves. This allows us to learn more about the dynamical behavior of the system under study than by just focusing on local dynamics, since we obtain useful information on the size of the chaotic attractors and the structure of their basins of attraction. Both of the sequences of bifurcations described in this paper, either a change in the structure of B or a change in the structure of the attracting set caused by increasing one or both of the speeds of adjustment j i , result in a loss of predictability of the asymptotic behavior of the economic system. On the one hand, the global bifurcations of the boundaries of B cause an increasing uncertainty with respect to the destiny of an economic system starting from a given initial state. A small change in the initial condition, i.e., a small change in initial marketing e ! orts, or a small exogenous shock during the adjustment process, may cause a great modi " cation of the long-run behavior of the system, since it can be transformed from a bounded process into a non-feasible one. On the other hand, the local and global bifurcations that change the structure of the attractor A give rise to an increasing loss of information about the asymptotic evolution of the system. The convergence to the well-known steady state is replaced * for increasing values of the speeds of adjustment * by an asymptotic convergence to a periodic cycle, with predict- able cyclic values of the state variables, and then by a cyclic behavior with output levels which are not well predictable since they fall inside cyclic chaotic areas. Finally, a situation of erratic behavior inside a large area of the strategy space with no apparent periodicity may occur.For the marketing theorist these results may be interesting, since the delimita- tion of the basin of attraction of a locally stable set permits one to understand if a given exogenous shock can be recovered by the endogenous dynamics of the economic system, or if it will cause an irreversible departure from the attractor. In terms of marketing theory our analysis might o ! er an explanation for the existence of various types of marketing institutions as some kind of & disequilib- rium mechanisms ' designed to bu ! er or reduce the e ! ects of complex dynamics (see Hibbert and Wilkinson, 1994). In any event, this type of analysis reveals which values of the parameters lead to erratic, random-looking patterns often found in marketing time series (see Bishop et al., 1984; Priesmeyer, 1992). Our analysis also shows that the parameters j 1 and j 2 , which are under the decision makers ' control, are critical in the sense that their values determine the dynamics of the system. Although economists mainly focused on one-dimensional systems, more recent publications indicate an increasing interest in higher-dimensional eco- nomic models (see Gardini, 1992, 1993; Delli Gatti et al., 1993; Hommes, 1998; Gardini, 1994; de Vilder, 1996; Brock and Hommes, 1997; for the study of homoclinic bifurcations). Consequently, it seems that mathematical methods developed to study higher-dimensional (particularly, two-dimensional) systems will play a considerable role in economics.