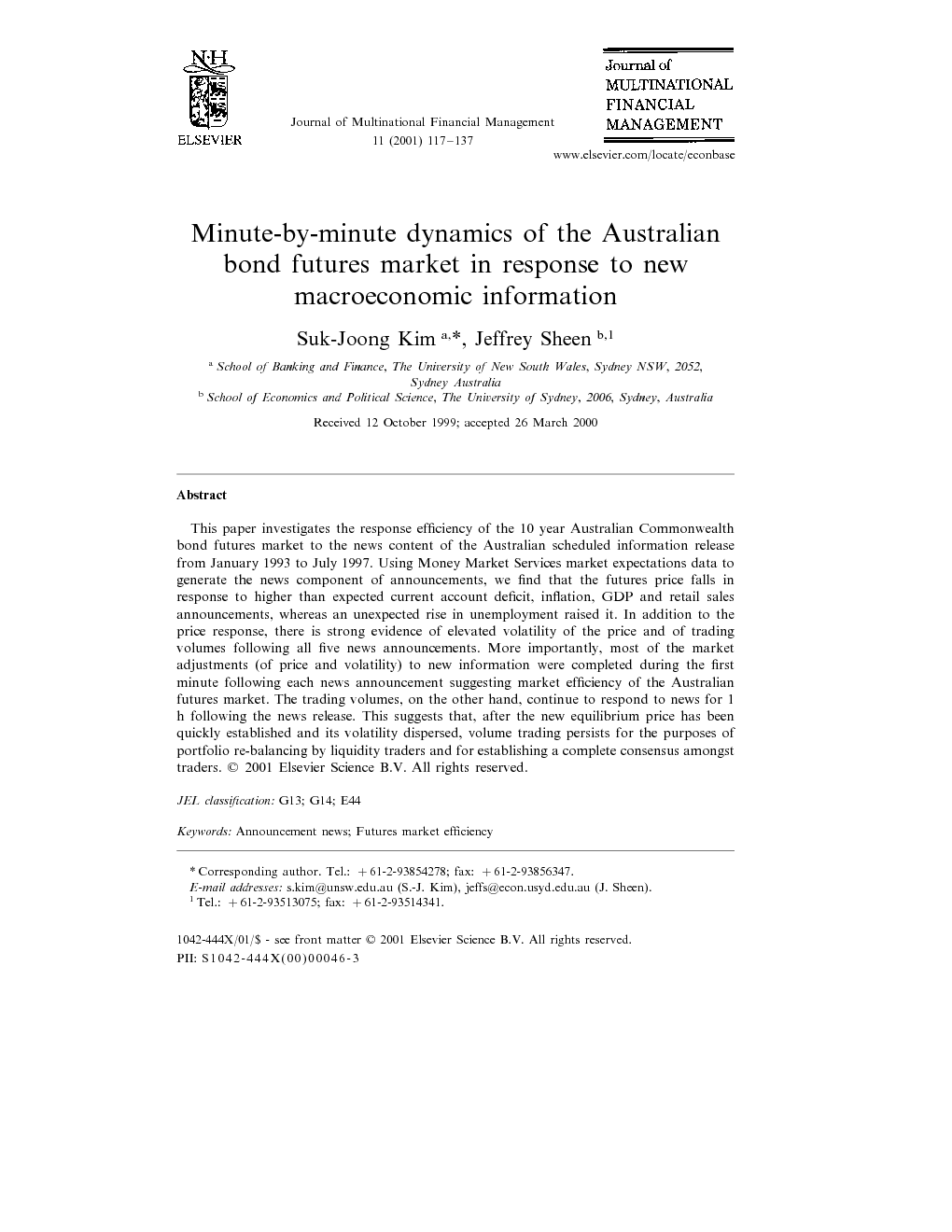 This paper investigates the response efficiency of the 10 year Australian Commonwealth bond futures market to the news content of the Australian scheduled information release from January 1993 to July 1997. Using Money Market Services market expectations data to generate the news component of announcements, we find that the futures price falls in response to higher than expected current account deficit, inflation, GDP and retail sales announcements, whereas an unexpected rise in unemployment raised it. In addition to the price response, there is strong evidence of elevated volatility of the price and of trading volumes following all five news announcements. More importantly, most of the market adjustments (of price and volatility) to new information were completed during the first minute following each news announcement suggesting market efficiency of the Australian futures market. The trading volumes, on the other hand, continue to respond to news for 1 h following the news release. This suggests that, after the new equilibrium price has been quickly established and its volatility dispersed, volume trading persists for the purposes of portfolio re-balancing by liquidity traders and for establishing a complete consensus amongst traders.

There is an extensive literature on the role of scheduled information releases in the financial markets. The information contents of scheduled announcements of macro-economic variables by relevant government authorities have been widely investigated for their significance in pricing financial assets. The effects of announcement news (as measured by the difference between the actual announced value and the expected value obtained from Money Market Services) on various asset price returns were investigated by Engel and Frankel, 1984, Hardouvelis, 1988, Thornton, 1989, Hogan et al., 1991, Aggarwal and Schirm, 1992 and Aggarwal and Schirm, 1998, etc. for various US macroeconomic announcements; Goodhart and Smith, 1985 and Hakkio and Pearce, 1985 for the UK announcements; and Singh (1995), Karfakis and Kim, 1995 and Kim, 1996 for Australian information releases. The common theme amongst these studies is to explain the economics of price movements of financial assets following scheduled economic announcements. In addition to the news effects on the price movements, the responses of various measures of returns volatility also received attention. These include Madura and Tucker, 1992, Bonser-Neal and Tanner, 1996 and Hung, 1997 who used option price implied volatilities for the US Dollar exchange rates to look into the news effects on the volatilities. Kim (1998) implemented the GARCH methodology to analyze the news effects on the Australian dollar exchange rate volatility, and Kim and Sheen (2000) estimated a bivariate GARCH model for Australian and US interest rates (short-term and long-term) and showed that Australian and US macro news have local as well as international effects (in the case of the latter) on both conditional means and volatilities. These studies report, in general, an elevated volatility of asset returns in response to new information. Both types of research utilize daily price and volatility movements to investigate the news effects. Typically, changes in prices and volatilities are measured over two successive days of market closing observations and they are regressed on the news components of economic announcements. Thus, the primary focus is on the discovery of existence and direction of inter-daily movements in price and volatility of financial assets. These studies shed some light on the process of price formation of financial assets and on market expectations of government policy reactions to announcement news. The efficiency of markets in making use of relevant information is analysed by examining responses to the expected component of any macroeconomic announcement. However, with regard to the speed of arbitrage processes, inter-daily changes are inadequate for revealing microstructural aspects of the price adjustment mechanism. Ederington and Lee, 1993 and Ederington and Lee, 1995 made an important contribution in this regard by utilising tick data from eurodollar futures prices and showing that most of the price adjustments to the US macroeconomic announcement news are concluded within the first min of an information release. Fleming and Remolona (1997a) studied a year's worth of tick data from the 5 year US treasuries market and investigated the effects of the scheduled US information releases on the price volatility and trading volume. They reported some stylised facts regarding bond market behavior in response to announcements which includes a significant rise in price volatility and a noticeable but delayed rise in trading volume. They explained this as a heightened heterogeneity of information processing immediately following an information release and as stimulated trading owing to portfolio re-adjustments following significant price changes. One common weakness of these papers, however, is that they do not make use of market-based expectations to derive the news content of the announcements. Instead, they use price deviations measured by the difference between the current price and the average (time-of-day) sample price. Becker et al. (1996) suggested that this approach is inadequate for investigating market efficiency with regard to the news releases since “these deviations are not conditioned on available information and can only be used to derive estimates of the relationship between the releases and the unconditional volatility of returns (p. 132).” Becker et al. (1996)'s methodology is to examine the intra-day adjustment speed of the US and the UK futures market to the US macro-economic announcement news by concentrating on the unexpected components of the announcements measured by the deviation of the actual values from the MMS survey expectations. They found significant price adjustments during the first 15 and 30 min time periods following some of the scheduled information releases (CPI inflation, non-farm payrolls and merchandise trade balance). Furthermore, they found some evidence of delay in market adjustments to the merchandise trade balance news as evidenced by significant news coefficients throughout the trading day. They attributed this to a possible unspecified bias in the MMS expectations data or market inefficiency. Fleming and Remolona (1997b) used the expectations data published in the Wall Street Journal and reported significant price and trading volume responses to the unexpected components of the announcements. The aim of this paper is to adopt Becker et al. (1996)'s approach to investigate the news effects of Australian scheduled macroeconomic announcements on the Australian 10 year government bond futures traded on the Sydney Futures Exchange. The contribution of this paper to the literature is the investigation of the speed of adjustments of not only the bond futures prices but also the holding period return volatility and trading volume of the futures contracts in response to the news content of the information release. The results of the investigation indicate that both the price and return volatility of the Australian 10 year bond futures respond significantly to new information, and most of the price adjustments and the volatility responses are concluded within the first min of trading after the 11:30 am information release. This result of rapid market response is in line with that of Ederington and Lee (1995). Furthermore, there is a delayed and sustained effect on the trading volume. This is a similar finding to that of Fleming and Remolona (1997a). The rest of this paper is organised as follows. Section 2 outlines the data and the econometric methods employed, Section 3 provides the estimation results, and Section 4 offers conclusions.

The scheduled release of Australian economic variables are investigated for their impact on the 10 year Australian Commonwealth Government bond futures contract traded on the Sydney Futures Exchange. We have shown that the news component of each of the five macro-economic information releases significantly affects market activities (in the form of returns, volatilities and trading volumes). The initial responses to the news announcements are such that the bond futures price fell significantly immediately following the releases of news on the CAD, the CPI, the GDP and retail sales, but was significantly raised following the unemployment news announcement. The underlying economic reasons for their responses vary across the news variables. We attribute the positive price response to the CPI, the GDP and the retail sales news to higher inflation expectations pushing the bond futures price down. The price response to the CAD and the unemployment rate news may be related to the market’s expectation of monetary policy response to these news announcements. Following an unexpected deficit news release, a tightening of monetary stance aimed at dampening domestic demand for imports, while a higher than expected unemployment may indicate a possible future loosening of the stance to stimulate economic activities. The CAD response may also be due to a fear of risk-quality downgrading of A$ denominated assets. In addition to the news effects on the returns, the behavior of volatilities and trading volumes following the news release are investigated. We find that both the bond volatility and trade volumes are significantly raised in response to the surprise component of each announcement suggesting that when the market is presented with new information relevant for bond pricing, trading activity is amplified resulting in higher price volatility and volumes. We have also found some evidence of market efficiency in the Australian 10 year bond futures market. The market responses to the news components of scheduled release of macro-economic information have been shown to be rapid; most of the adjustments to the bond futures price occur within the first minute following the news release. The effects of news on the bond futures price volatility are also relatively short-lived with most of the volatility concentrated in the first minute. In contrast, the news announcements had a sustained effect of raising trade volume throughout the 1 h post-announcement period. This may be explained, as in Fleming and Remolona (1997a), by the need of liquidity traders to adjust their portfolios after a significant price change in response to news announcements, and for traders to establish a complete consensus. They will choose to enter the market when the market has re-established equilibrium and this is likely to be at least 1 min after the announcements. In sum, we have found evidence of strong futures market response to the news component of scheduled economic information release, and furthermore the speed of adjustment is shown to be rapid.