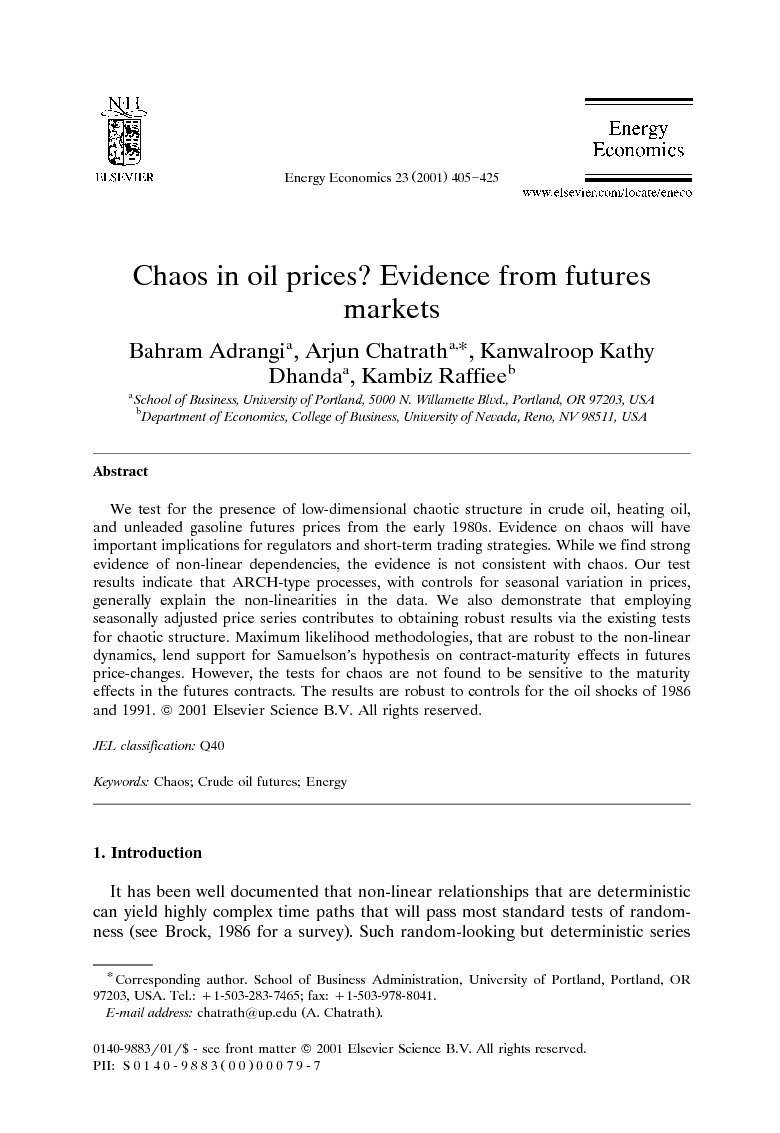 We test for the presence of low-dimensional chaotic structure in crude oil, heating oil, and unleaded gasoline futures prices from the early 1980s. Evidence on chaos will have important implications for regulators and short-term trading strategies. While we find strong evidence of non-linear dependencies, the evidence is not consistent with chaos. Our test results indicate that ARCH-type processes, with controls for seasonal variation in prices, generally explain the non-linearities in the data. We also demonstrate that employing seasonally adjusted price series contributes to obtaining robust results via the existing tests for chaotic structure. Maximum likelihood methodologies, that are robust to the non-linear dynamics, lend support for Samuelson's hypothesis on contract-maturity effects in futures price-changes. However, the tests for chaos are not found to be sensitive to the maturity effects in the futures contracts. The results are robust to controls for the oil shocks of 1986 and 1991.

Financial research in the past two decades has focused on the chaotic behavior of various price series for a number of reasons. Several research papers document evidence of non-linearity and chaos for various financial and economic variables. Chaotic dynamics are necessarily non-linear, and may be quite suitable in explaining sudden movements and wide fluctuations in stock prices, exchange rates, and myriad of other financial and economic series may not be properly captured by linear models. Furthermore, there is growing belief that technical analysis may succeed in forecasting short-term price behavior of chaotic time series. For instance, there is some evidence that simple and common technical trading rules Že.g. the heads-over-shoulders trading rule. will provide a short-term advantage to the trader when the price series is chaotic. Employing daily data for over a decade, we conduct a battery of tests for the presence of low-dimensional chaotic structure in the crude oil, heating oil, and unleaded gasoline futures prices. Daily returns data from the nearby contracts are diagnosed employing correlation dimension tests, BDS tests, and tests for entropy. While we find strong evidence of non-linear dependence in the data, the evidence is not consistent with chaos. Our test results indicate that ARCH-type processes may explain the non-linearities in the data. We also make a case that employing seasonally adjusted price series is important to obtaining robust results via the existing tests for chaotic structure. The evidence that the three oil commodities are driven by ARCH-type processes Žand not chaos. is robust to controls for the oil shocks of 1986 and 1991. For the three contracts several ARCH-type models adequately explain non-linear dependencies, and the maturity-effect in futures prices. The GARCH Ž1,1. results for the three futures contracts provide evidence in favor of the Samuelson hypothesis: volatility in futures returns increases as contracts approach maturity. However, the tests for chaos were found not to be as sensitive to controls for futures contract-maturity as they were to controls for seasonality.