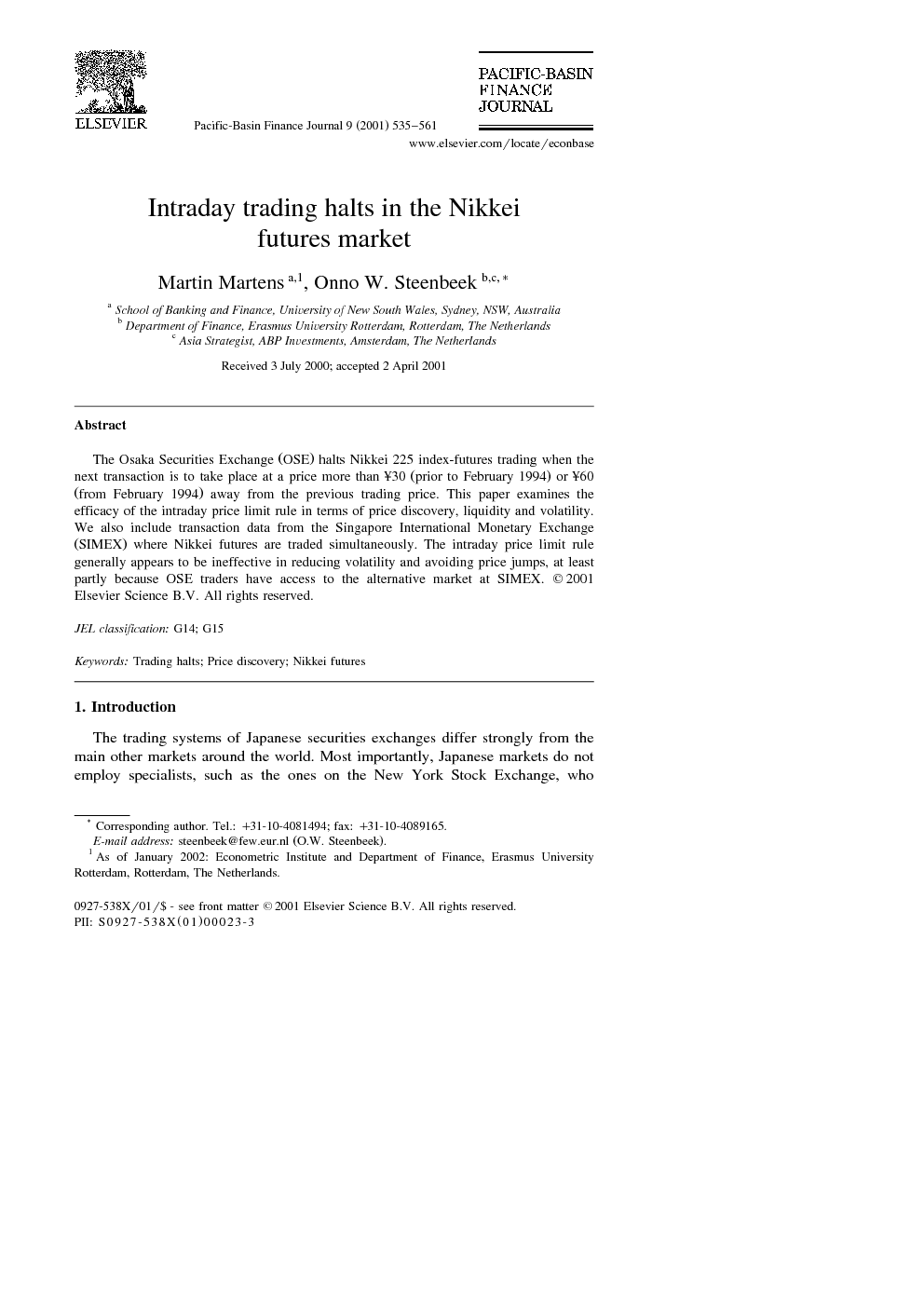 The Osaka Securities Exchange (OSE) halts Nikkei 225 index-futures trading when the next transaction is to take place at a price more than ¥30 (prior to February 1994) or ¥60 (from February 1994) away from the previous trading price. This paper examines the efficacy of the intraday price limit rule in terms of price discovery, liquidity and volatility. We also include transaction data from the Singapore International Monetary Exchange (SIMEX) where Nikkei futures are traded simultaneously. The intraday price limit rule generally appears to be ineffective in reducing volatility and avoiding price jumps, at least partly because OSE traders have access to the alternative market at SIMEX.

In this study we look at trading activity, price discovery and volatility in Nikkei futures at SIMEX and the OSE around Osaka trading halts. The OSE changed the intraday price limit rule triggering trading halts in February 1994. Prior to this date, the intraday price limit rule was such that it was frequently triggered and potentially lasted very long. The new intraday price limit rule, still applied today, is much more lenient and leads to a substantially lower amount of trading halts.The old rule led to an excessive number of trading halts, without yielding the desired reduction in volatility. In fact, in approximately 50% of the cases was a trading halt followed by another trading halt within 15 minutes. Under the new rule in 1994r1995 we find SIMEX activity to increase during OSE trading halts, especially when trading halts last longer than 2 minutes. Hence, it appears Žand it is certainly the case today. that at that time many OSE members were a member of SIMEX as well. As such, although the new trading rule is much more flexible, many OSE members now trade on SIMEX when the trading halts occur under the new rule. This renders the new intraday price limit rule more or less ineffective in reducing volatility, and the OSE has lost a substantial amount of its volume share to SIMEX. We even find that the conditional volatility of SIMEX Nikkei futures prices is significantly higher in the first minute after a trading halt than it is in the final minute prior to the trading halt. In terms of price discovery the Osaka price jumps when trading resumes. Hence, trading halts interrupt the continuous path of prices, rather than enhancing it. Of course, on the other hand, it is true that trading often resumes at a price closer to the previous trading price, which improves the continuity of prices. In general, however, the presence of SIMEX substantially reduces any potential effects the OSE might have hoped for. SIMEX does seem to underreact during non-trading, prices rising Ždecreasing. only half as much as the final change when trading resumes within 1 minute after that. In general the OSE and SIMEX prices are in line again within 2 minutes after trading resumes. Over the past years, more and more financial markets have changed their Aold-fashionedB trading systems into modern electronic trading systems. However, the weakness of electronic trading systems remains its handling of very volatile markets. The OSE’s AsolutionB to the problem, the intraday price limit rule, does not seem to be effective, partly because of the presence of an alternative market in Singapore. Abolishing the rule would have a positive influence on price discovery process as well as on the volume share on the OSE.