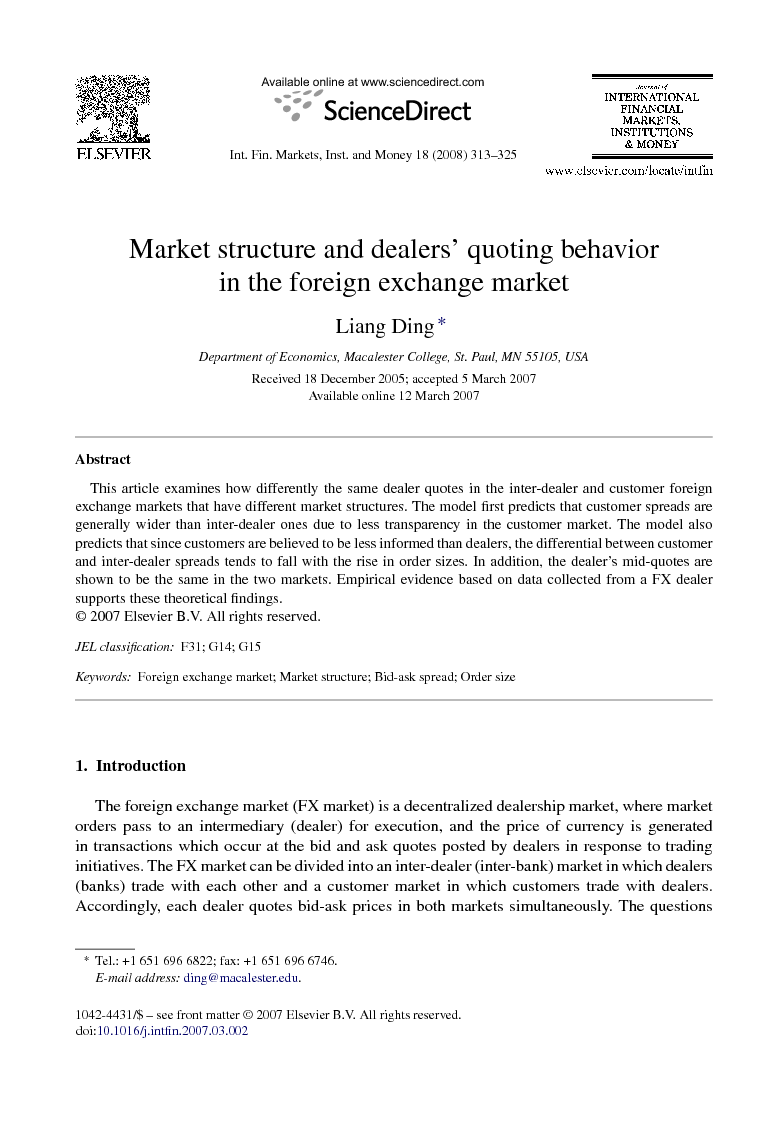 This article examines how differently the same dealer quotes in the inter-dealer and customer foreign exchange markets that have different market structures. The model first predicts that customer spreads are generally wider than inter-dealer ones due to less transparency in the customer market. The model also predicts that since customers are believed to be less informed than dealers, the differential between customer and inter-dealer spreads tends to fall with the rise in order sizes. In addition, the dealer's mid-quotes are shown to be the same in the two markets. Empirical evidence based on data collected from a FX dealer supports these theoretical findings.

The foreign exchange market (FX market) is a decentralized dealership market, where market orders pass to an intermediary (dealer) for execution, and the price of currency is generated in transactions which occur at the bid and ask quotes posted by dealers in response to trading initiatives. The FX market can be divided into an inter-dealer (inter-bank) market in which dealers (banks) trade with each other and a customer market in which customers trade with dealers. Accordingly, each dealer quotes bid-ask prices in both markets simultaneously. The questions arising are: does the dealer quote the same bid-ask prices in the two markets at the same time? Are his spreads and mid-quotes the same in the two markets? If not, why are they different? How different are they? Since these questions concern the same dealer's simultaneous quotes in the two markets, any difference between the quotes, if it exists, is not jeopardized by the change of an agent's preference over time or the heterogeneity of various dealers. Therefore, any potential difference between the dealer's quotes must be caused by the difference in market structure. In this sense, the dealer's quoting decision in both markets is ideal for examining the impact of market structure on the market participant's behavior. Understanding this impact helps central banks or other market participants assess how variations in regulation, technological innovation, or other factors that change the market structure affect the FX market, especially dealers’ quoting behaviors. Unfortunately, the current literature has not yet provided satisfactory answers to the market microstructure issue noted above. On the theoretical level, most existing models such as those of Biais (1993) and Laux (1995) were built originally for stock markets, which operate differently from the FX market and do not have separate venues for inter-dealer and customer trading, and therefore do not posses the features needed to answer our concerns. The few models built specifically for the FX market either concentrate on one market alone (e.g., Bessembinder, 1994 (inter-dealer market), Carlson, 2005 (customer market)), or just ignore the distinctions between the two markets (e.g., Derviz, 2004). On the empirical level, different data sets have been used to examine the exchange rate formation in the FX market. Bjonnes and Rime (2005), for example, use quotes from four top dealers working in a large Scandinavian bank. Berger et al. (2006), Mende et al. (2006), Ito and Hashi (2004) as well as Andersen et al. (2003) had access to electronic inter-dealer dealing systems (e.g., Reuters or EBS). All of these data comprise inter-dealer quotes. No other researchers have examined customer quotes before, much less compared inter-dealer quotes to customer ones. To answer the questions listed above, I first build a model that identifies and reflects the distinctions between the customer and inter-dealer FX markets to determine the dealer's optimal bid-ask quotes in both markets so that comparisons can be made. Empirically, I collect a new data set comprising inter-dealer and customer quotes to test the model's theoretical conclusions. Three major findings are suggested by this paper. First, due to less transparency in the customer market, the significant extra cost paid by customers to find the best deal allows a margin for the dealer to keep the customer spread generally wider than in an inter-dealer transaction. Second, given a larger order size, the dealer is more inclined to raise the spread to deter adverse selection when trading with dealers than customers, who are believed to be less informed, and therefore the spread gap decreases with a rise in order size. Third, in spite of these distinctions, the mid-quotes of bid-ask prices in the two markets are shown to be identical. This article makes several contributions to the literature. First, to my knowledge, this paper is the first to formally address the differences between quotes posted by the same dealer and to conduct further examinations. Second, a new model is built to capture the features of both the inter-dealer and customer markets and to embody the differences. Third, the paper uses a new data set to conduct an empirical comparison of inter-dealer and customer quotes, which has never been documented before in the literature. The rest of the paper is structured as follows: Section 2 presents a theoretical model and solutions, Section 3 introduces the new data and provides empirical evidence, and finally, Section 4 concludes the paper.

To examine the dealer's quoting behavior under different market structures, this paper develops a model viewing the dealer as a risk aversion agent who optimizes his portfolio by choosing bid-ask prices. The differences between inter-dealer and customer markets are recognized and incorporated into the model, and the optimal bid-ask quotes are determined in both markets, so that the explicit forms of mid-quotes and spreads are obtained for further analysis. The solutions of the model show that, first, the customer mid-quote is equal to the inter-dealer mid-quote; second, customer spreads are wider than inter-dealer ones; third, the gap between customer and inter-dealer spreads decreases with a rise in order size. A new data set is collected from an online FX dealer to test these theoretical findings, and the empirical results support the theoretical conclusions. Although the article throws some light on the impact of the market structure of FX markets on a dealer's quoting behavior, it also highlights areas for further research. First, this study only involves one individual dealer and one currency pair. Determining whether the conclusions apply to other dealers and other currencies deserves further work. Second, in the future, the heterogeneity of various dealers can be reinforced by relaxing the assumptions made in this paper regarding identical inventory distribution and degree of risk aversion. Finally, IT technology has been progressing rapidly in the past two decades. Examining how changes in trading platforms influence dealer behavior should be another exciting avenue for future research.