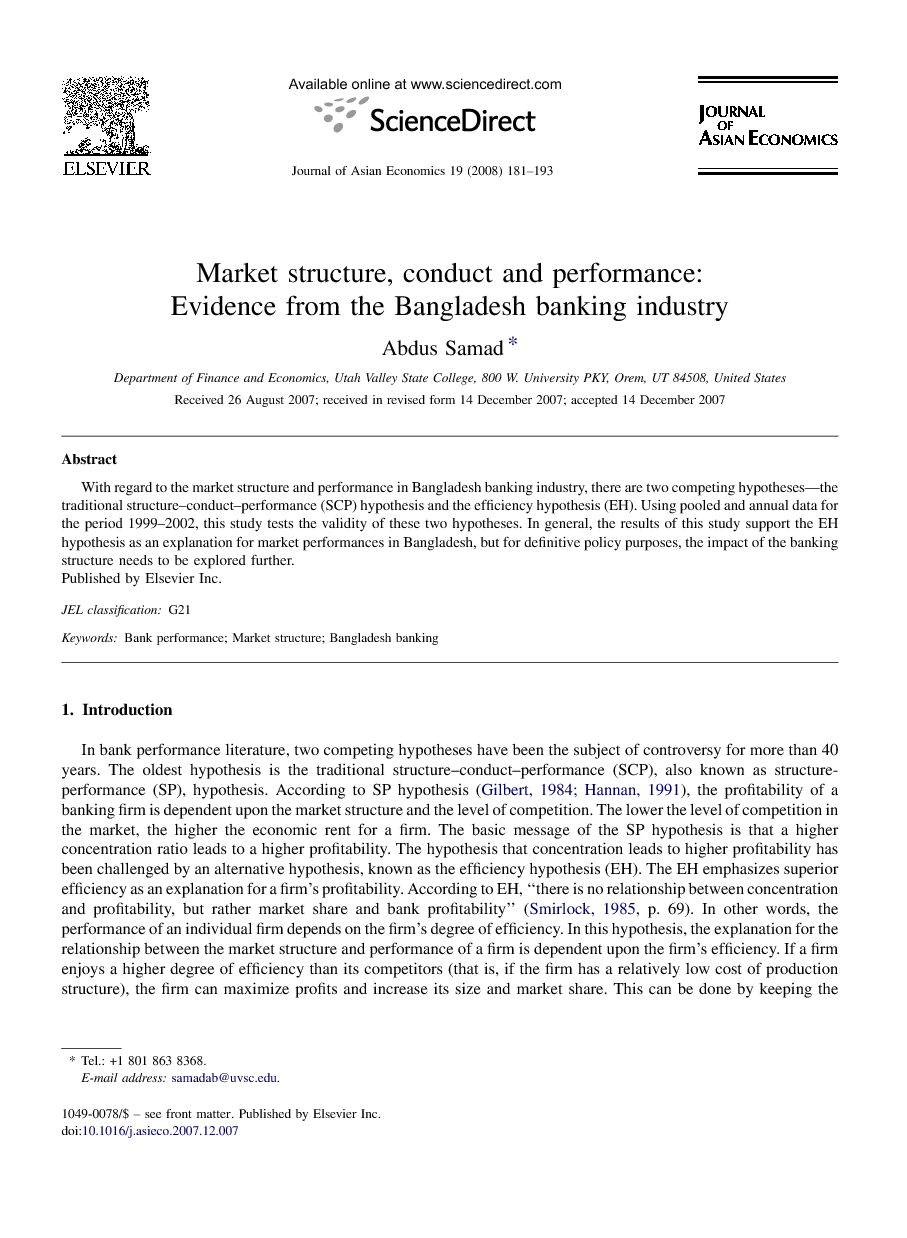 With regard to the market structure and performance in Bangladesh banking industry, there are two competing hypotheses—the traditional structure–conduct–performance (SCP) hypothesis and the efficiency hypothesis (EH). Using pooled and annual data for the period 1999–2002, this study tests the validity of these two hypotheses. In general, the results of this study support the EH hypothesis as an explanation for market performances in Bangladesh, but for definitive policy purposes, the impact of the banking structure needs to be explored further.

In bank performance literature, two competing hypotheses have been the subject of controversy for more than 40 years. The oldest hypothesis is the traditional structure–conduct–performance (SCP), also known as structure-performance (SP), hypothesis. According to SP hypothesis (Gilbert, 1984 and Hannan, 1991), the profitability of a banking firm is dependent upon the market structure and the level of competition. The lower the level of competition in the market, the higher the economic rent for a firm. The basic message of the SP hypothesis is that a higher concentration ratio leads to a higher profitability. The hypothesis that concentration leads to higher profitability has been challenged by an alternative hypothesis, known as the efficiency hypothesis (EH). The EH emphasizes superior efficiency as an explanation for a firm's profitability. According to EH, “there is no relationship between concentration and profitability, but rather market share and bank profitability” (Smirlock, 1985, p. 69). In other words, the performance of an individual firm depends on the firm's degree of efficiency. In this hypothesis, the explanation for the relationship between the market structure and performance of a firm is dependent upon the firm's efficiency. If a firm enjoys a higher degree of efficiency than its competitors (that is, if the firm has a relatively low cost of production structure), the firm can maximize profits and increase its size and market share. This can be done by keeping the present market price level. Thus, the increase of profits and market share is the result of efficiency, not of a higher concentration ratio (collusion). The proponents of both hypotheses claim support in their favor. There are three motivating factors that brought about this study. First, given the controversy between the two competing hypotheses, it is important to determine which hypothesis truly approximates and describes the Bangladesh banking industry. Determining the approximate behavioral relationship has important policy implications for Bangladesh because the presumed positive relationship between the market concentration and higher performance, for example, higher profits influences regulatory decisions regarding mergers and de novo entry. Increasing market concentration is also considered a social cost. Second, the relevance of the two hypotheses has been explored and tested in the context of the bank markets in developed countries. This study evaluates the validity of the two hypotheses in the context of the banking market in Bangladesh, a third-world country. Until 1980, the banking system of Bangladesh was quite concentrated and was regulated and protected from foreign competition. The domestic bank market was dominated by the operation of five nationalized commercial banks. This fact was conducive to collusive bank behavior leading to higher profitability. Thus, Bangladesh provides a good test case for evaluating the validity of the two competing hypotheses. Third, since the controversy of SCP and EH has not been resolved, the hypotheses deserve further exploration. This study can contribute to new findings in the banking performance literature. This paper is structured as follows: Section 1 provides a brief description of the institutional structure of the Bangladesh banking market. Section 2 describes SCP and EH in the context of market structure and performance relationship. Section 3 provides data and methodology. Section 4 reports results and conclusions.

The two hypotheses – SCP and ESH – are examined in the context of the assets and deposit market in Bangladesh. The results were presented from the tests of these hypotheses using both pool and annual data. Although three or four of the largest banks in Bangladesh dominated and controlled 50–62% of the total assets and deposits, their ROA and ROE are not satisfactory. One of the three largest banks in Bangladesh, Rupali bank, was operating with losses. Therefore, the coefficients of CR are, in most equations, negatively related. However, they are not significant. This is supported by the combined result of 36 equations reported in Table 2, Table 3 and Table 4. Thus, the SCP hypothesis is rejected for explaining bank performance in Bangladesh. The examinations of equations from the sample data revealed that the coefficient of MS in Eqs. (7) and (9) in Table 2, Table 3 and Table 4 and Eqs. (3) and (4) in Table 5 are positive and statistically significant even after controlling for concentration. This supports the efficiency structure (ESP) hypothesis. The efficiency of the banks measured by MS, not the concentration (CR) was an important factor for bank performance in the Bangladesh banking industry. These findings lend evidence in support of ESH. The result was consistent with the findings of Gilbert (1984), Osborne and Wendel (1983), Smirlock (1985), and Evanoff and Fortier (1988). However, the result should be interpreted cautiously for policy implications. The pooled data which contains robust information does not lend support to either of the hypotheses. Bank specific factors are more consistent in explaining bank performance in Bangladesh. Almost all regression results show that the bank specific variables, such as CRTA, LDEP, ASSETS, and OWNER, are statistically significant factors concerning bank performance in Bangladesh. Since four public sector-owned and regulated banks could not explain bank performance, policy makers should encourage more liberalization, not government control and regulation, of banks in Bangladesh. Liberalization of banks is good for the banking industry of Bangladesh.