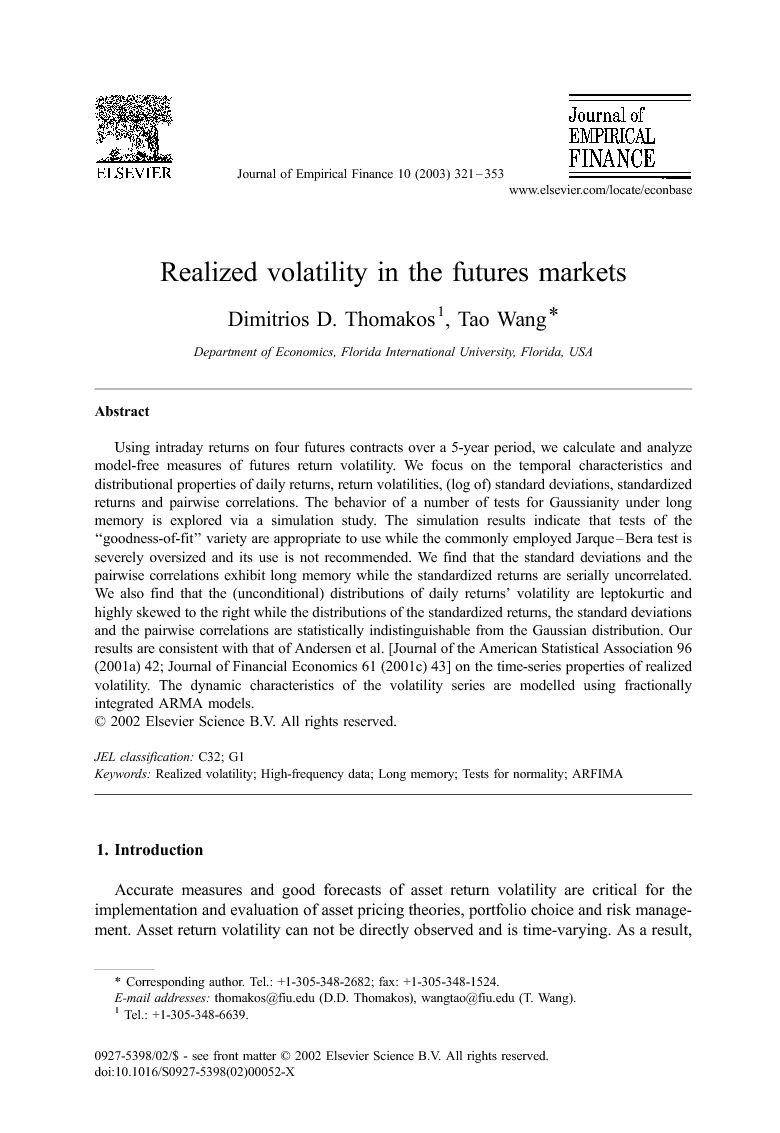 Using intraday returns on four futures contracts over a 5-year period, we calculate and analyze model-free measures of futures return volatility. We focus on the temporal characteristics and distributional properties of daily returns, return volatilities, (log of) standard deviations, standardized returns and pairwise correlations. The behavior of a number of tests for Gaussianity under long memory is explored via a simulation study. The simulation results indicate that tests of the “goodness-of-fit” variety are appropriate to use while the commonly employed Jarque–Bera test is severely oversized and its use is not recommended. We find that the standard deviations and the pairwise correlations exhibit long memory while the standardized returns are serially uncorrelated. We also find that the (unconditional) distributions of daily returns' volatility are leptokurtic and highly skewed to the right while the distributions of the standardized returns, the standard deviations and the pairwise correlations are statistically indistinguishable from the Gaussian distribution. Our results are consistent with that of Andersen et al. [Journal of the American Statistical Association 96 (2001a) 42; Journal of Financial Economics 61 (2001c) 43] on the time-series properties of realized volatility. The dynamic characteristics of the volatility series are modelled using fractionally integrated ARMA models.

Accurate measures and good forecasts of asset return volatility are critical for the implementation and evaluation of asset pricing theories, portfolio choice and risk management. Asset return volatility can not be directly observed and is time-varying. As a result, economists have built increasingly sophisticated statistical models to capture the characteristics of financial markets' volatility. Previous studies focus on parametric ARCH and GARCH models, stochastic volatility models, implied volatility from certain option pricing models or direct indicators of volatility such as ex post squared or absolute returns. Partial surveys of the voluminous literature on these models are given by Bollerslev et al. (1994), Ghysels et al. (1996) and Campbell et al. (1997). Recently, there has been renewed interest in obtaining improved daily volatility estimates by using high-frequency, intraday returns to construct daily “realized” or “integrated” volatility. Daily realized volatility is obtained as the sum of intraday squared returns. Using the theory of quadratic variation, Andersen and Bollerslev (1998) and Barndorff-Nielsen and Shephard (2001a) show that the realized volatility estimator, say vt2, is a consistent estimator of the actual volatility in the sense that vt2→σt2, where σt2 is the actual (but unobservable) volatility. 2 This is an interesting result for it is model-free and does not depend upon any particular form of σt2. In this paper, we construct and examine the distributional properties of daily futures realized volatility using high-frequency, intraday futures returns. We consider four of the most heavily traded futures contracts worldwide: the Deutsche Mark, the S&P500 index, US Bonds and the Eurodollar.3 We find that the logarithmic realized standard deviations exhibit long memory and approximate Gaussianity, while the standardized returns also exhibit approximate Gaussianity but are serially uncorrelated. Our analysis confirms previous work by Andersen et al. (2001a) (henceforth ABDL) and by Andersen et al. (2001c) (henceforth ABDE), who found similar results for daily foreign exchange return volatilities and daily stock return volatilities, respectively. Our approach differs, however, with the existing literature in several respects. First, rather than relying on descriptive statistics and graphs in investigating the distributional properties of the time series studied, as in ABDL (2001a) and ABDE (2001c), we perform a variety of formal statistical tests designed to capture the distributional properties of the volatility and return series. Second, we conduct a simulation study to examine the properties of these tests in the presence of long memory. Third, we model the realized volatility and logarithmic standard deviations using ARFIMA models and investigate the time-series properties of the series once long memory is removed.4 Finally, we apply the methodology of realized volatility in the futures markets using a new dataset. Our main motivation for applying a number of different tests for Gaussianity came from the observation that the commonly employed Jarque–Bera statistic (essentially a joint test for zero skewness and zero excess kurtosis) has been shown to over-reject the hypothesis of normality, especially in the presence of serially correlated observations. This result is frequently observed even when the empirical distribution function (edf) “looks” indistinguishable from the Gaussian distribution function.5 In addition to the Jarque–Bera test, we use a number of normality tests, all of which are of the “goodness-of-fit” variety. They are the Anderson–Darling test, the Crámer–Von Misses test, the QQ test (the correlation coefficient between the theoretical quantiles of the standard normal and the order statistics of the sample) and the Kolmogorov–Smirnov test. Both the Jarque–Bera and the other normality statistics have asymptotic distributions that are valid under the assumption of independent observations. Since we find that our series can be well characterized as long-memory processes, we provide an illustrative simulation study about the properties of these tests when the data generating process exhibits long memory. Our simulation results complement the theoretical work of Beran and Gosch (1991), and clearly suggest the use of the “goodness-of-fit” tests for normality, as we find that the Jarque–Bera test is highly oversized (i.e., over-rejects normality). Additional details can be found in Appendix B. To preview our results, we find that the distributions of the raw returns for all four futures contracts are highly non-Gaussian and leptokurtic. After normalizing the raw returns by the realized standard deviations, the standardized return distributions become statistically indistinguishable from the Gaussian distribution (the evidence on the Eurodollar futures contract is slightly mixed). The distributions of realized volatilities are all highly non-Gaussian and skewed to the right. However, the distributions of the logarithmic standard deviations for all the four futures contracts are approximately Gaussian. The distributions of the six daily covariances among the Deutsche Mark, the Eurodollar, the S&P500 and the T-bonds are highly non-Gaussian. Among the distributions of the daily correlations, we find evidence of Gaussianity only for the pairs Deutsche Mark/T-bonds, Eurodollar/T-bonds and S&P500/T-bonds. Our results suggest that all of the volatility measures can be characterized by slowly mean-reverting fractionally integrated processes with a degree of integration, d, estimated between 0.25 and 0.45. In addition, we find that asymmetric volatility, the asymmetry in the relationship between past negative and positive returns and future volatilities, is not statistically significant for the futures contracts studied except possibly for the S&P500 index. Finally, we model the realized volatility series using fractionally integrated ARMA (ARFIMA) models. The remainder of the paper is organized as follows. The next section describes the data and volatility calculations. The temporal characteristics of the volatility and correlations are discussed in Section 3. Section 4 details the unconditional univariate return and volatility distributions. Section 5 discusses the leverage effects in the realized volatilities and realized correlations. The realized volatility modeling is discussed in Section 6. Section 7 offers some concluding remarks. Appendix A and Appendix B contain details about the test statistics and the simulation results on the finite sample properties of the normality tests used in the paper.

In this paper, we constructed and examined the statistical properties of daily realized volatilities for four of the most heavily traded futures contracts using intraday returns over a 5-year period. We focus on the temporal characteristics and the distributional properties of daily returns, return volatilities and (log of) standard deviations, standardized returns and pairwise correlations. We also explored the behavior of a number of tests for Gaussianity under long memory via a simulation study. The simulation results indicate that tests of the ‘‘goodness-of-fit’’ variety are appropriate to use while the commonly employed Jarque–Bera test is severely oversized and its use is not recommended. It was found that the standard deviations and the pairwise correlations exhibit long memory while the standardized returns are serially uncorrelated. It was also found that the (unconditional) distributions of daily returns’ volatility are leptokurtic and highly skewed to the right while the distributions of the standardized returns, of the standard deviations and of the pairwise correlations are statistically indistinguishable from the Gaussian distribution. Our analysis suggests that there is only limited evidence of asymmetric volatility for our futures return series. Our overall findings are consistent with existing work on realized volatility such as in ABDE (2001c) and in ABDL (2001a,b), and as such, they extend the current literature on model-free estimates of realized volatility and correlation using high-frequency, intraday futures data. Two interesting extensions of the current work, in the context of our futures data, are the examination of the forecasting performance of models based on realized volatility (complementing and extending the work of Bollerslev and Wright, 2001; ABDL, 2001b) and the effects of news announcements on the temporal and distributional characteristics of the volatility and correlation series. Both of these extensions are currently pursued by the authors.