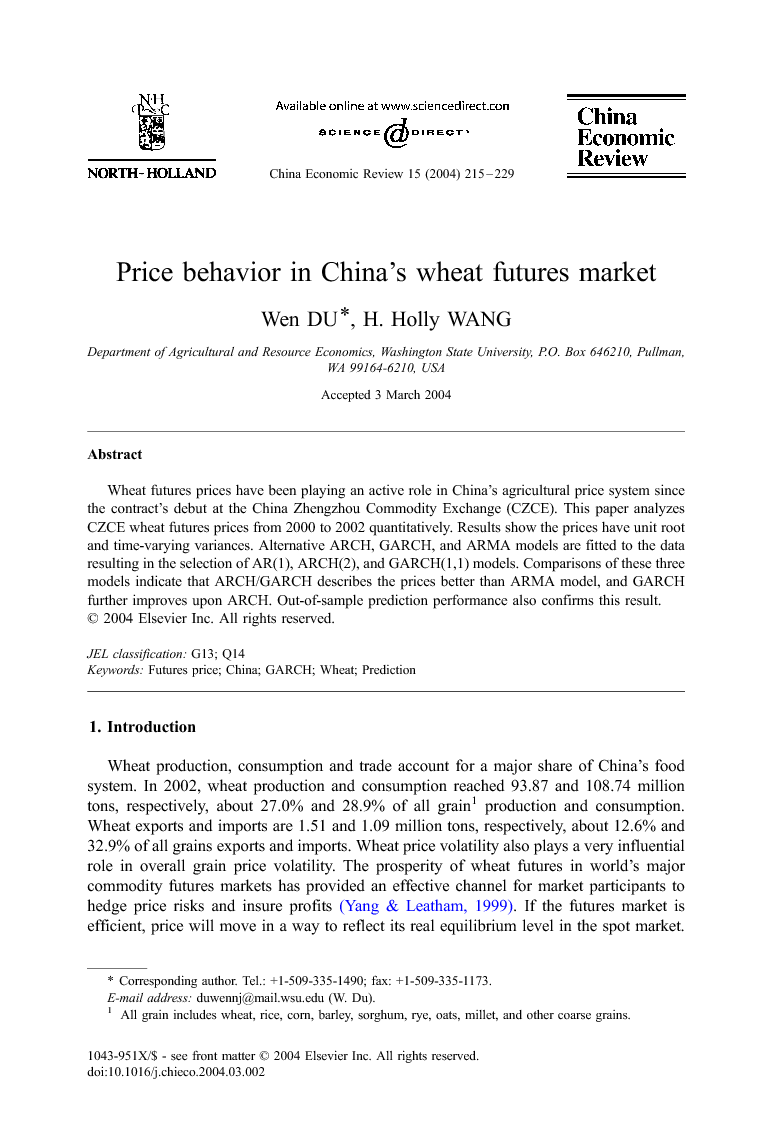 Wheat futures prices have been playing an active role in China's agricultural price system since the contract's debut at the China Zhengzhou Commodity Exchange (CZCE). This paper analyzes CZCE wheat futures prices from 2000 to 2002 quantitatively. Results show the prices have unit root and time-varying variances. Alternative ARCH, GARCH, and ARMA models are fitted to the data resulting in the selection of AR(1), ARCH(2), and GARCH(1,1) models. Comparisons of these three models indicate that ARCH/GARCH describes the prices better than ARMA model, and GARCH further improves upon ARCH. Out-of-sample prediction performance also confirms this result.

Wheat production, consumption and trade account for a major share of China's food system. In 2002, wheat production and consumption reached 93.87 and 108.74 million tons, respectively, about 27.0% and 28.9% of all grain1 production and consumption. Wheat exports and imports are 1.51 and 1.09 million tons, respectively, about 12.6% and 32.9% of all grains exports and imports. Wheat price volatility also plays a very influential role in overall grain price volatility. The prosperity of wheat futures in world's major commodity futures markets has provided an effective channel for market participants to hedge price risks and insure profits (Yang & Leatham, 1999). If the futures market is efficient, price will move in a way to reflect its real equilibrium level in the spot market. Efficient futures prices help the formation of a rational market expectation of price in both the short run and the long run. Agricultural commodity futures markets emerged in China in the early 1990s, when China was stepping into a higher phase of its market-oriented economic reform. One of the motives to establish futures markets was to provide a price indicator and stabilizer to reduce the volatility in agricultural spot markets in China. In this paper, we investigate the price behavior in China's wheat futures market in an attempt to provide a tractable model for prediction. China's first exchange market, the China Zhengzhou Commodity Exchange (CZCE) was founded in 1990. Wheat futures trading started in May 1993. CZCE is the only exchange trading wheat futures contracts in the country today. In 1999, CZCE accounted for 50% in total trading value and 49% in total trading volume of all commodity exchanges in China. Since then, the trading of wheat futures has experienced a stable growth except for 1999.2 In 2002, the total trading value amounted to 225.25 billion Yuan3 and total trading volume was 18.27 million contracts (Fig. 1). Full-size image (7 K) Fig. 1. Annual wheat futures trading in CZCE 1993–2002. Data source: CZCE 2002 Annals: http://www.czce.com.cn/home/annals.asp. Figure options After about 10 years of development, the wheat futures price in CZCE is on the way to becoming an important indicator of China's wheat price. The correlation between the spot price and futures price is as high as .96 and a strong association is identified between the wheat futures price of CZCE and that of Chicago Board of Trade (CBOT) (CZCE Report, 2001). China's wheat futures price became more important to the world after November 2001 when China obtained full membership in the WTO. The previously overvalued domestic wheat price is facing challenges from major wheat exporters such as the USA and Canada, and is expected to undergo a downward shift. Meanwhile, the futures price in CZCE may become more volatile from the stronger linkage to the world commodity markets and the unpredictable factors in the world economy. Conversely, price may become less volatile because domestic speculators, who had a fairly strong influence on prices in the past (Durham & Si, 1999), will not be able to affect the world market price. China is the biggest wheat production and consumption country in the world. China's successful economic reform has drawn the whole world's attention for the past 20 years. However, studies on China's agricultural commodity futures markets are limited, particularly with regard to wheat futures. Moreover, most of existing studies are only descriptive analyses on regulatory and market development issues rather than quantitative investigations of futures prices. Such studies include Fan, Ding, and Wang (1999), Tao and Lei (1998), and Zhu and Zhu (2000). A historical perspective on the development of China's futures market is shown in Yao (1998), which includes a detailed structural analysis of the commodity futures markets and the government's legislative and regulatory attempts. Some quantitative analyses have been attempted in recent years. Williams, Peck, Park, and Rozelle (1998) investigated mung bean trading in CZCE to test for market efficiency. Durham and Si (1999) examined the relationship between the Dalian Commodity Exchange (DCE) and the CBOT soybean futures prices. Ke and Wang (2002) investigated the information efficiency of the CZCE wheat and DCE soybeans futures markets in a market cointegration framework. Studies explicitly investigating China's wheat futures price behavior have not been found. Careful examination of price models can lead to effective prediction, which is very important for traders in the futures market. Reliable price models will also provide a foundation for any empirical analyses involving futures price, such as a risk management analysis for growers and processors who hedge in futures market. This research represents an effort to focus on a quantitative assessment of China's wheat futures prices. Modeling the time-varying pattern of agricultural commodity futures prices has been investigated by many economists using various approaches. The moving average (MA) model, autoregressive (AR) model, or the more general, autoregressive integrated moving average (ARIMA) model, is usually fitted to identify the pattern of a time series (Box & Jenkins, 1976). More complete but complicated price models were developed in the last two decades. The autoregressive conditional heteroskedasticity (ARCH) model (Engle, 1982), and generalized ARCH (GARCH) model (Bollerslev, 1986) have enjoyed the most attention. The ARCH model succeeds in modeling the stochastic time-varying volatility and excess kurtosis of commodity price changes. ARCH allows the shocks in nearby earlier periods to affect the current volatility positively. The GARCH model generalizes the ARCH model by assuming not only previous shocks, but also previous volatilities affect current volatility. Volatility behaves like an AR process with drifts. Once developed, these models were widely adopted to successfully fit agricultural commodity prices Myers, 1994 and Tomek & Myers, 1993. Stochastic trend or unit root was discovered as a characteristic property of many high-frequency commodity price series Ardeni, 1989 and Baillie & Myers, 1991. Conditional heteroskedasticity constitutes another common characteristic of commodity futures prices Baillie & Myers, 1991 and Yang & Brorsen, 1992. The objective of this paper is to find the best time-series model to describe the price behavior of China's wheat futures market. Specifically, this analysis will: (1) estimate ARMA and ARCH/GARCH models for China's wheat futures; (2) integrate ARMA and ARCH/GARCH models to capture the AR effects on both first and second moments; and (3) compare the estimation and forecasting performances among these models.

Futures price can be used as a predictor for spot market price if the commodity market is efficient. China’s agricultural commodity futures markets have been available for about a decade. This study has investigated the futures price movement by fitting three types of time-series models to the historical prices in an attempt to identify the best model. This effort is important and meaningful for future studies on market efficiency and price prediction, which can lead to better policy and trading decisions. The futures prices in CZCE for the wheat contract maturing in May for 2000–2002 followed an almost pure random walk except for a jump at the contract switching point of May 24, 2001. Using first difference data, ARMA models are initially applied by assuming the error variance is constant. Results show AR(1) model is the best among all other ARMA candidates. Due to the time-varying volatility in the data, the conditional heteroskedasticity models are then examined. Compared to AR(1), both ARCH(2) and GARCH(1,1) models improve the goodness of fit relative to the error structures. The W. Du, H.H. Wang / China Economic Review 15 (2004) 215–229 227 performance of GARCH(1,1) is similar to its ARCH(2) counterpart with a slight improvement in estimation. The fitness of the models is further examined in terms of forecasting performances. Out-of-sample prediction evaluation indicates that the three selected models, AR(1), ARCH(2), and GARCH(1,1), provide close results to the mean level of the true values. The GARCH model still performs the best, which is consistent with the evaluation in insample estimation. The GARCH model based on first difference data accounts for time-varying volatility and excess kurtosis in daily prices and dominates the other models for our selected China’s wheat futures price. Thus, the GARCH model is recommended as an important empirical method for future analyses of the price behavior in China’s wheat futures market. GARCH effects in other low-frequency commodity futures prices in China should also be tested when these prices are involved in time-series analysis. Moreover, this result is consistent with those from the studies of commodity futures prices around the world, showing that futures prices in China behave in a similar way as futures prices in other countries.