عنوان انگلیسی
Bond yields in emerging economies: It matters what state you are in
دانلود فوری مقاله + سفارش ترجمه 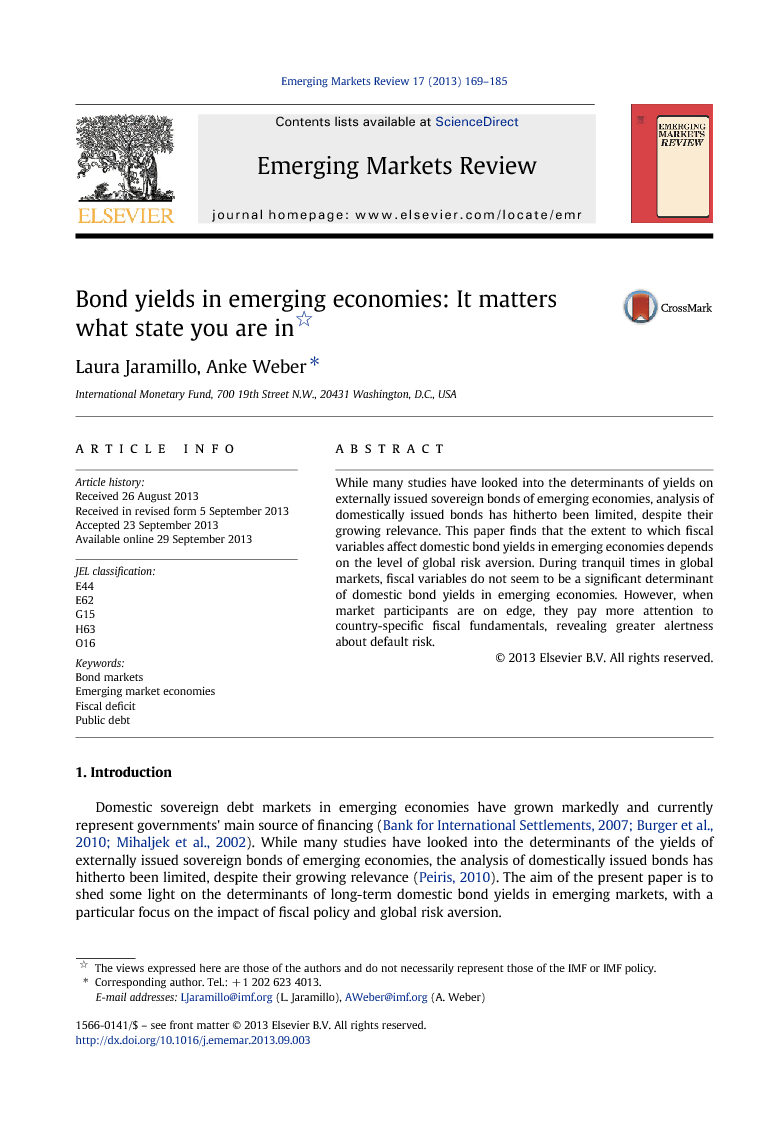 While many studies have looked into the determinants of yields on externally issued sovereign bonds of emerging economies, analysis of domestically issued bonds has hitherto been limited, despite their growing relevance. This paper finds that the extent to which fiscal variables affect domestic bond yields in emerging economies depends on the level of global risk aversion. During tranquil times in global markets, fiscal variables do not seem to be a significant determinant of domestic bond yields in emerging economies. However, when market participants are on edge, they pay more attention to country-specific fiscal fundamentals, revealing greater alertness about default risk.

The present paper sheds new light on the determinants of domestic bond yields in emerging markets. It makes several contributions to the existing literature. It develops a new high frequency dataset with wide country coverage. It also takes into account the effect that a shift in global market sentiment can have on investors' assessment of credit risk by extending the basic fixed effects model to allow the explanatory variables to have differing regression slopes depending on whether global risk aversion is above or below a certain threshold, which is chosen endogenously to maximize the fit of the model. The results show that it does matter what state you are in, both in terms of the global environment as well as the health of a country's fiscal position. During tranquil times in global markets, bond yields are mainly influenced by inflation and real GDP growth projections, showing markets' greater concern with risk stemming from sensitivity to macroeconomic shocks. However, when global risk aversion is high, market participants pay more attention to country-specific fiscal fundamentals, revealing greater alertness about default risk. These findings have important policy implications. In view of the ebb and flow of global conditions, they underscore the need to remain fiscally prudent in good times, as the favorable conditions facing emerging markets could shift unexpectedly. Indeed, when the VIX crossed the model defined threshold in mid-2011, bond yields increased for those countries with the weakest fiscal position. There are several directions for further research. In particular, it would be interesting to analyze if the negative spillovers from global risk aversion found in this paper are not homogenous across countries but rather are a function of country specific characteristics such as the strength of fiscal fundamentals and the size of trade and financial sector linkages. This topic, which goes beyond the scope of this paper, is left for future analysis.