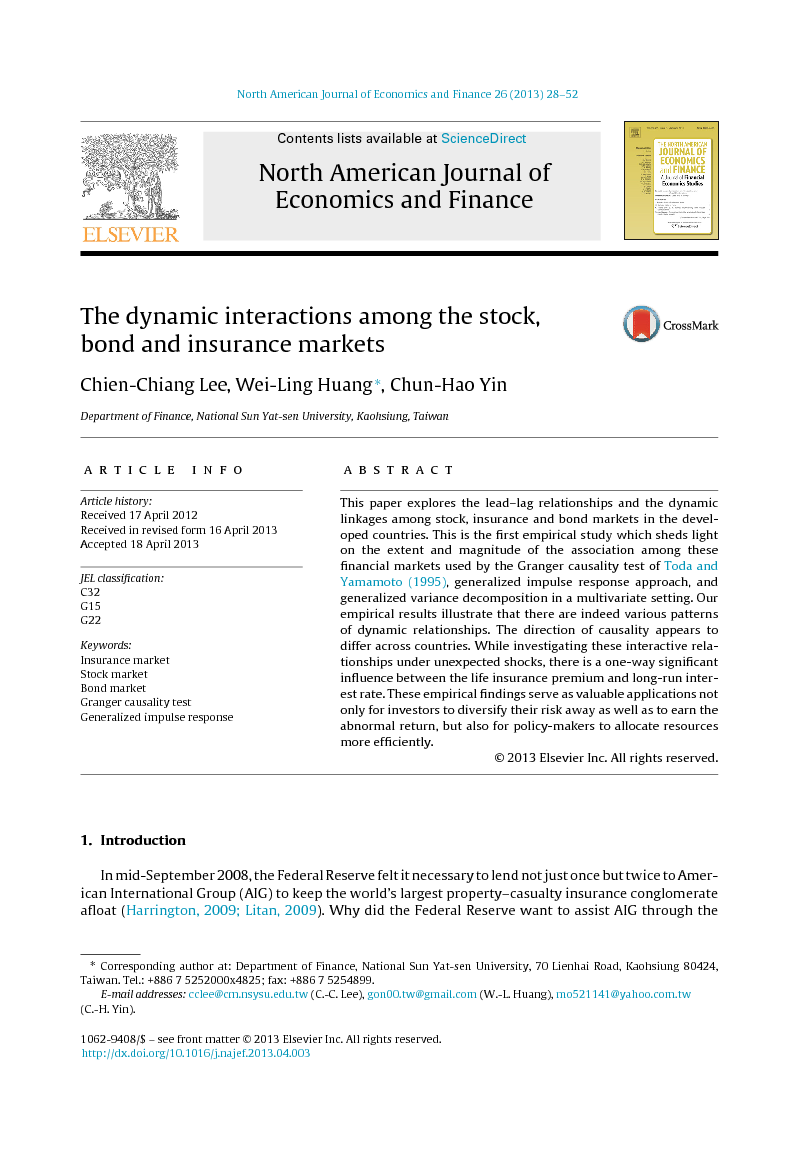 This paper explores the lead–lag relationships and the dynamic linkages among stock, insurance and bond markets in the developed countries. This is the first empirical study which sheds light on the extent and magnitude of the association among these financial markets used by the Granger causality test of Toda and Yamamoto (1995), generalized impulse response approach, and generalized variance decomposition in a multivariate setting. Our empirical results illustrate that there are indeed various patterns of dynamic relationships. The direction of causality appears to differ across countries. While investigating these interactive relationships under unexpected shocks, there is a one-way significant influence between the life insurance premium and long-run interest rate. These empirical findings serve as valuable applications not only for investors to diversify their risk away as well as to earn the abnormal return, but also for policy-makers to allocate resources more efficiently.

In the past decade, theoretical and empirical researches on the insurance issue have proved that insurance market activity is closely associated with economic performance. One of these indicates that complementarity (a positive correlation) exists between the insurance and financial markets. Others show that these financial markets either exhibit a substitution effect (a negative correlation) or no significantly correlated. However, most of the prior studies which lack the dynamic connections of cross-sectional analysis in these markets as discussed by the panel approach might have difficultly showing obvious conclusions. To improve this drawback, this article not only investigates the causal relationships, i.e., the substitutive or complementary relationships, among the stock, insurance and bond markets, but also illustrates the unexpected impact on these linkages as shocks occur. This provides long-term investors with important trading information to diversify risk away as well as earn abnormal returns, and policy-makers to allocate resources more efficiently. First, in this article we apply the VAR model developed by Toda and Yamamoto (1995) which is able to be neglected in models that require differencing and pre-testing to lessen the loss of data in several developed countries, namely, Canada, France, Italy, Japan, the United Kingdom and the United States, over the 1979–2007 periods. In order to derive more general empirical results, we separate the insurance premium data into life and non-life premiums. The empirical results show that there are various patterns of dynamic relationships across developed countries. For instance, the U.K. and U.S. stock markets are the leading indexes of the insurance market and the bond market in the next period will be affected by the insurance market. Moreover, we can find that there is a complementary between the insurance and stock markets is in the U.K., but substitution in the U.S. By contrast, in Japan the insurance asset is a highly diversified tool because of no causal relationship among them. Secondly, we make use of the generalized impulse response function to detect the on these dynamic relationships when unexpected shocks occur. In France, Japan, the U.K. and the U.S., there is a unidirectional significant influence between the life insurance premium and the long-run interest rate. In referring to the stock market, only the shock in Japan has a significant effect on the life and non-life insurance premiums. Thirdly, form the analysis of the generalized variance decomposition, life and non-life insurance premiums are not usually the most exogenous assets compared with those in other financial markets. These are valuable applications for investors to readjust their trading strategies appropriately and policy-makers to implement either monetary policy or financial support carefully when unexpected changes take place. Finally, we organize the empirical results based on our hypotheses and provide some beneficial suggestions for investors and policy-makers. For example, under complementary cases, if the financial markets are growing as in the cases of the stock or bond markets, investors should either long stock or bond assets, and then short their insurance assets to regulate their hedging strategy, or else long insurance and other financial assets to earn abnormal returns. Furthermore, with respect to policy-makers, this paper implies that the insurance market really plays a vital intermediary role that a number of studies usually ignore. And it could give empirical ground to the micro-insurance policy strategy of the stock and the bond markets and complement the theory of the wealth effects of insurance. Therefore, policy-makers not merely place emphasis on the development of stock and bond markets, but also consider the influence of insurance markets together to make optimal decisions that allocate resources more efficiently so that the monetary policy works better.