عنوان انگلیسی
When did the dollar overtake sterling as the leading international currency? Evidence from the bond markets ☆
دانلود فوری مقاله + سفارش ترجمه 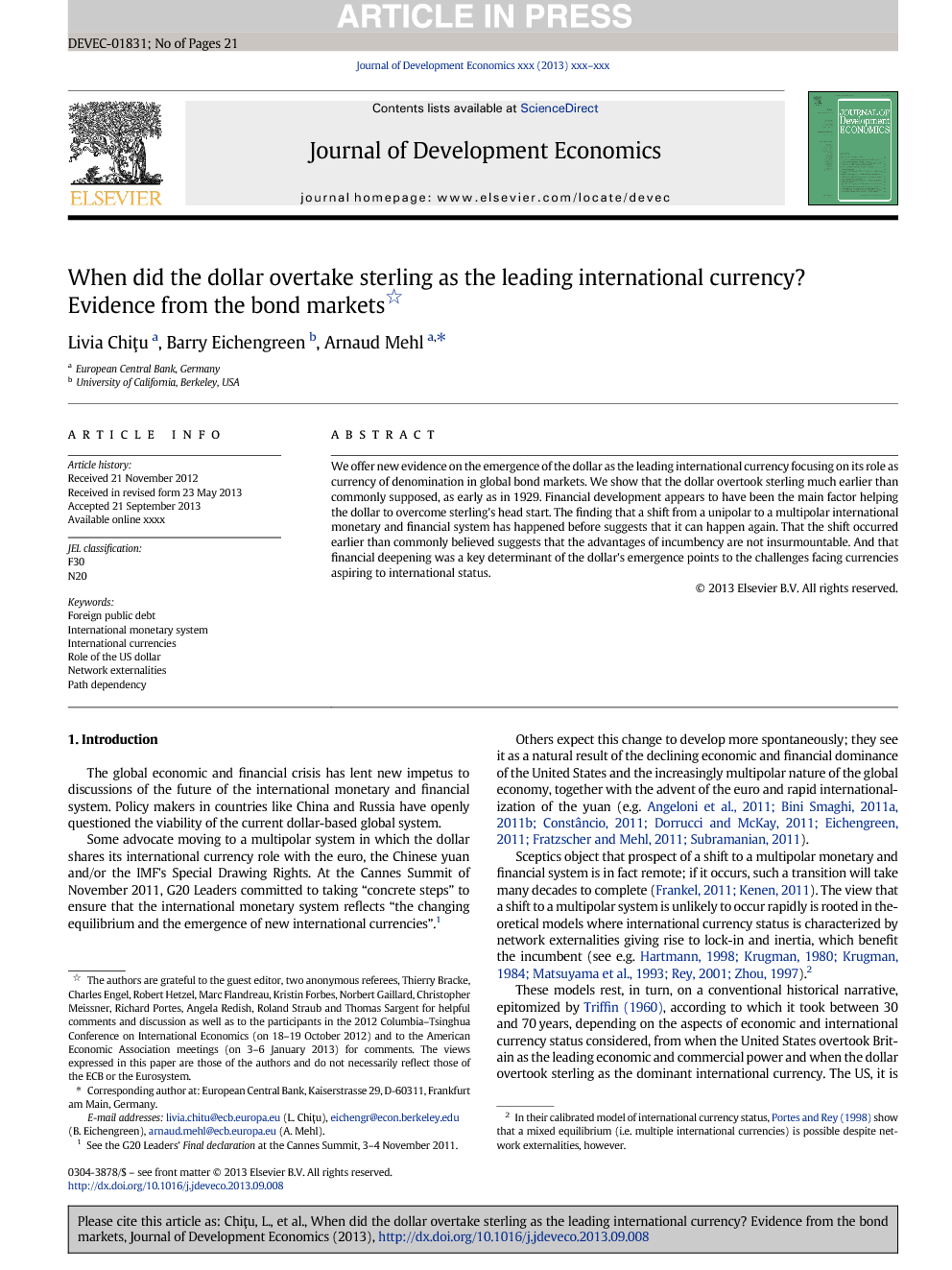 We offer new evidence on the emergence of the dollar as the leading international currency focusing on its role as currency of denomination in global bond markets. We show that the dollar overtook sterling much earlier than commonly supposed, as early as in 1929. Financial development appears to have been the main factor helping the dollar to overcome sterling's head start. The finding that a shift from a unipolar to a multipolar international monetary and financial system has happened before suggests that it can happen again. That the shift occurred earlier than commonly believed suggests that the advantages of incumbency are not insurmountable. And that financial deepening was a key determinant of the dollar's emergence points to the challenges facing currencies aspiring to international status.

This paper has provided new evidence on the emergence of the US dollar as the leading international currency, focusing on its role as a financing currency in global debt markets. This evidence challenges the three central tenets of the conventional wisdom on international currencies. First, network externalities, first-mover advantages and inertia matter, but they cannot indefinitely delay the transfer of leadership in the international monetary sphere relative to that in the economic, commercial and financial spheres; they do not dominate to the extent previously thought. Our evidence shows that, abstracting from the Commonwealth countries, the dollar overtook sterling already in 1929, at least 15 years prior to the date cited in other accounts. Even including the Commonwealth countries, which were wedded to sterling for political and institutional reasons, the dollar was already within hailing distance of sterling as a currency of denomination for international bonds by the latter 1920s. Second, our evidence challenges the presumption that once international monetary leadership is lost, it is gone forever. Although sterling lost its leadership in the 1920s it recovered after 1933 and again ran neck and neck with the dollar at the end of the decade. Third, our findings challenge the presumption that there is room for only one dominant international currency due to strong network externalities and economies of scope. International debt markets in the 1920s and the 1930s were characterized by a bipolar currency system, not a unipolar one. This is true even if one takes into account the Commonwealth countries, which were heavily oriented towards sterling for very institutional and political reasons. Our results point to the development of US financial markets as the main factor that helped the US dollar overcome sterling's incumbency advantage. We find that financial deepening was the most important contributor to the increase in the share of the US dollar in global foreign public debt between 1918 and 1932. In the case of the UK, economic stagnation (declining relative economic size) was the most important factor accounting for sterling's declining share over the period. These findings have implications for the future of the international monetary system. They suggest that a shift from a unipolar dollar-based system to a multipolar system is not impossible; that it could occur sooner than often believed; and that financial deepening and market liquidity will be key determinants of the ability of currencies other than the dollar to strengthen their international currency status. They point to addressing financial market fragmentation and deepening financial integration in the euro area as important to the evolution of the euro's international profile in the years ahead; and to the opening up of the capital account, along with further exchange rate reform and the building up of liquid domestic financial markets, as of key importance to that of the Chinese yuan. The international status of a currency will rest on solid foundations, however, only if financial deepening in the issuing country is sustainable, and not if financial innovation and liberalization simply causes a boom that eventually goes bust. The impact of finance on international currency shares in global debt markets worked both ways during the interwar period. In particular, the collapse of the US banking system and subsequent financial retrenchment were the most important factor contributing to the decline in the share of the US dollar in global foreign public debt between 1932 and 1939. The yen's experience is another cautionary tale. Attempts by the Japanese authorities to develop the international role of their currency suffered from the bursting of Japan's equity and real estate bubbles in the late 1980s and the banking and economic crisis of the 1990s. This underscores that the compass guiding the pace and scope of financial sector reform should always point to the direction of medium-term sustainability. In turn, this highlights the important role that macro-prudential policies and tools will play in shaping the international status of currencies in the new millennium.