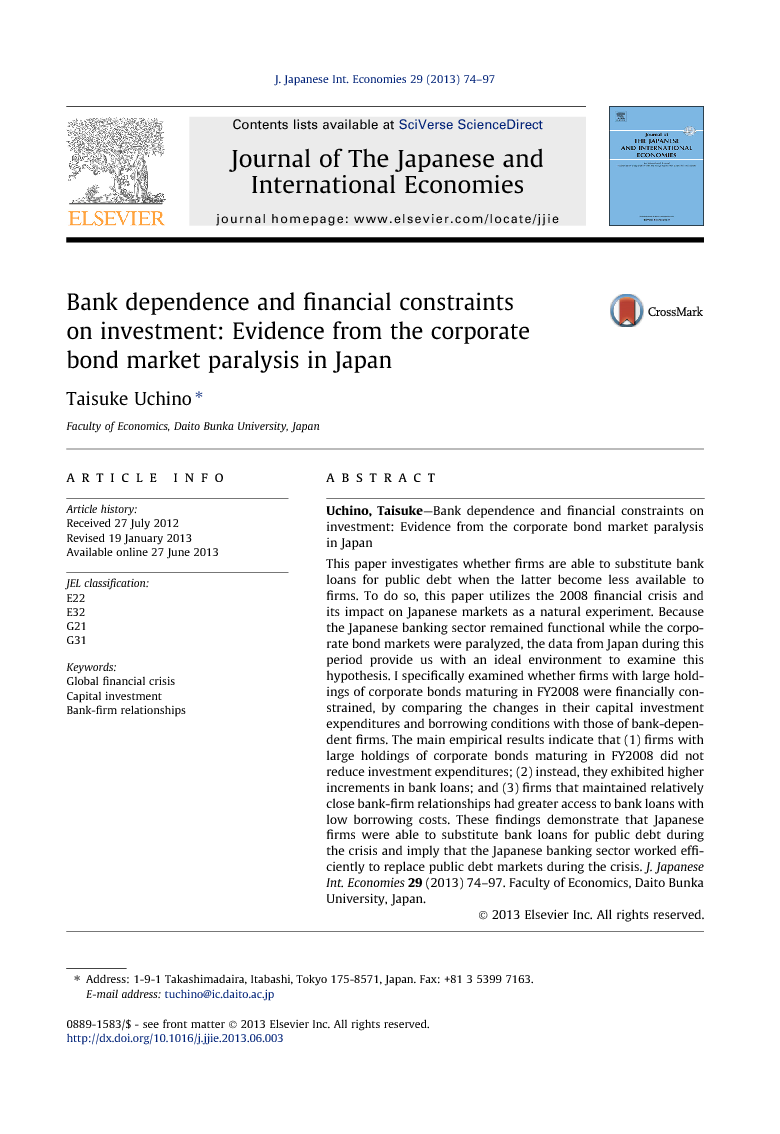 This paper investigates the substitutability between bank loans and public debt by examining whether treated firms, defined as Japanese listed firms with large holdings of maturing corporate bonds, were financially constrained during the 2008 financial crisis. The empirical results from matching estimators show that these firms did not decrease their capital investment expenditures relative to bank-dependent firms. In contrast, their bank loan balances rose sharply without simultaneous increments in borrowing costs. It is also revealed that treated firms with close bank-firm relationships had greater access to bank loans with low borrowing costs when the heterogeneity of the treatment effects is considered. Although firms without such close relationships experienced increases in their borrowing costs, the changes in the investment rates were not statistically different from those of firms with close bank-firm relationships. These empirical results demonstrate that Japanese firms were sufficiently able to substitute bank loans with corporate bonds during the crisis and imply that the Japanese banking sector worked efficiently to replace the public debt market. Given the fact that the majority of bond-issuing firms maintained close bank-firm relationships, the reason that these results are obtained is that the problems of asymmetric information between banks and firms are mitigated through existing bank-firm relationships, even for bond-issuing firms. Existing studies such as Chava and Purnanandam (2011) show that shocks in the banking sector negatively affect the performance of bank-dependent firms. Nevertheless, the results of this study demonstrate that the 2008 shocks to the corporate bond markets were offset by the banking sector, which prevented propagation to the real Japanese economy. The results of this paper also raise additional questions for future research. First, in order to learn a lesson from the financial crisis, empirical analyses must examine the causes of public debt market paralysis and the mechanisms behind the international propagation of shocks. Further, it is important to investigate whether firm activities other than capital investments were affected by this financial shock. In particular, it would be fruitful to examine the exporting activities of treated firms without close bank-firm relationships. Finally, the role of credit lines must be assessed. Firms with lines of credit must have relied on them during the crisis, but lack of data on this prevented this paper from pursuing this topic. Nonetheless, it could be an important research subject to investigate how lines of credit functioned during the crisis period and what kinds of bank-firm relationships were involved.