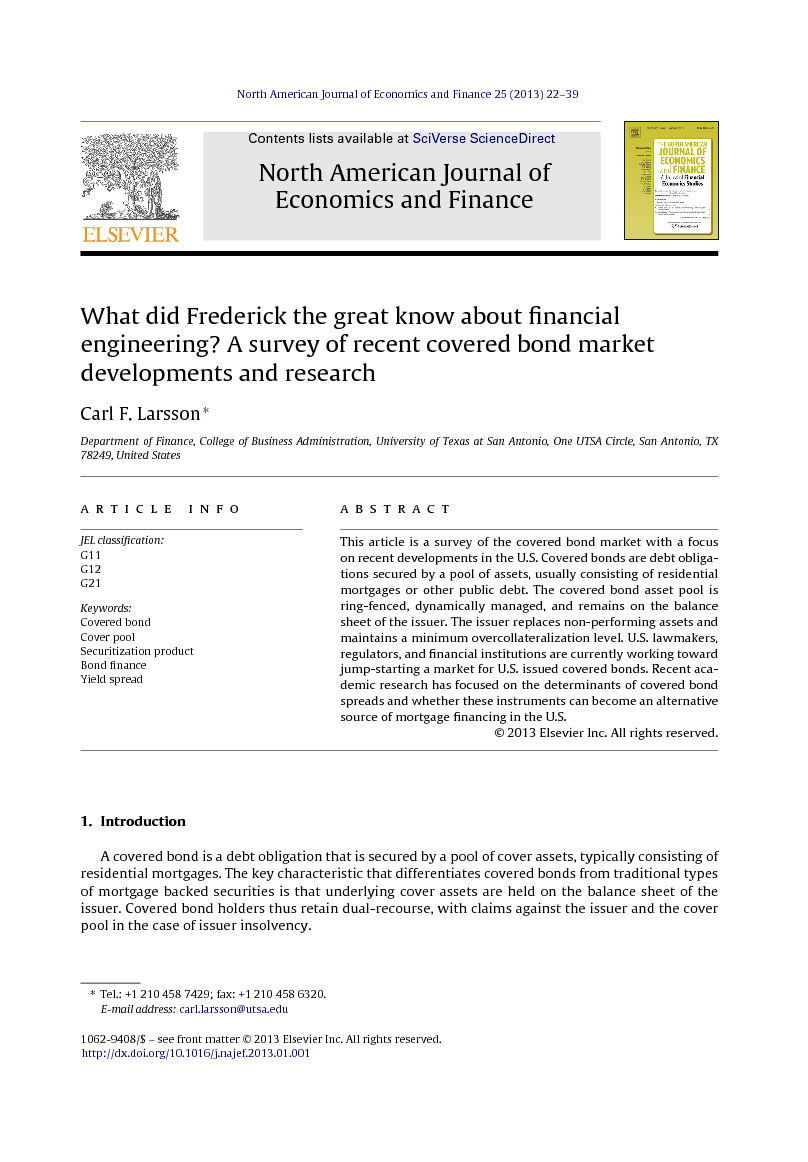 This article is a survey of the covered bond market with a focus on recent developments in the U.S. Covered bonds are debt obligations secured by a pool of assets, usually consisting of residential mortgages or other public debt. The covered bond asset pool is ring-fenced, dynamically managed, and remains on the balance sheet of the issuer. The issuer replaces non-performing assets and maintains a minimum overcollateralization level. U.S. lawmakers, regulators, and financial institutions are currently working toward jump-starting a market for U.S. issued covered bonds. Recent academic research has focused on the determinants of covered bond spreads and whether these instruments can become an alternative source of mortgage financing in the U.S.

After a long and successful history in Europe—spanning as far back as 18th Century Prussia and the reign of Frederick the Great—will covered bonds ever catch on in the U.S.? With the high investor protection provided by ring-fenced and dynamically managed cover pools, covered bonds potentially present a low-cost, alternative source of financing for U.S. financial institutions. Before this can be realized, however, a number of regulatory issues must first be sorted out. The all-important feature of any covered bond is the dual-recourse security it provides investors through a ring-fenced and dynamically managed cover pool. These investor protections can be attained through legislative, as well as structured, covered bond issues. The simplicity of legislative covered bonds, however, provides a relative cost advantage for issuers over more complex structured covered bonds. Additionally, the clarity provided by covered bond legislation on how covered bonds are to be treated in the case of issuer default further increases the price that investors are willing to pay for these highly rated securities. The FDIC's final policy statement, released in 2008, was a good first step toward creating a viable regulatory framework for U.S. covered bond issuers. Comparing the huge market for European issued covered bonds—a growing portion of which are denominated in U.S. dollars—to the utter lack of U.S. issued covered bonds seems to suggest that more action is needed. Recent research points to the benefits of covered bond financing when the essential regulatory frameworks are in place. The pending U.S. House and Senate bills on covered bonds, then, hold the potential to finally make simpler, more clear-cut, standardized, and cost-effective covered bond issues a reality for U.S. financial institutions.