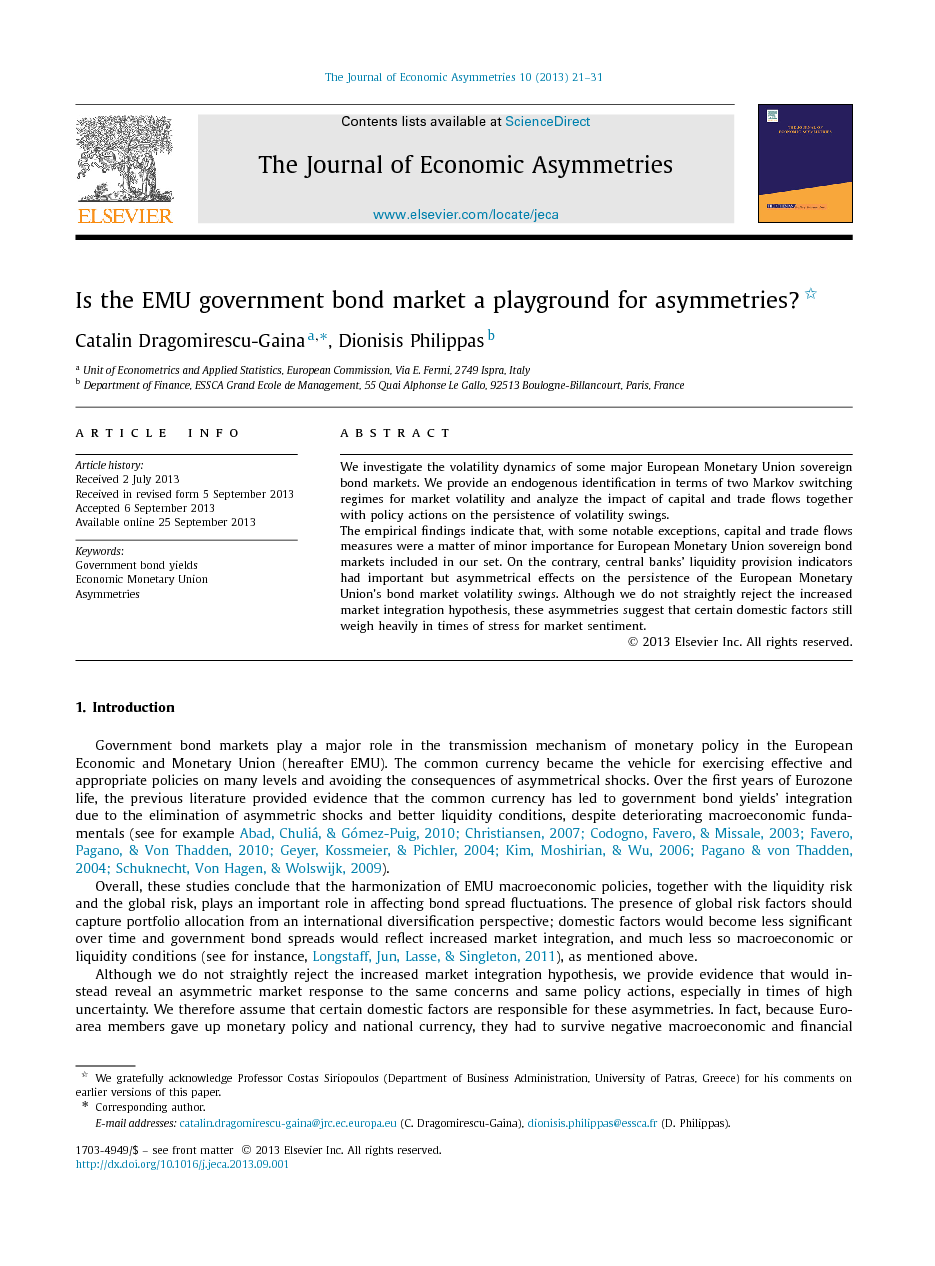 We investigate the volatility dynamics of some major European Monetary Union sovereign bond markets. We provide an endogenous identification in terms of two Markov switching regimes for market volatility and analyze the impact of capital and trade flows together with policy actions on the persistence of volatility swings. The empirical findings indicate that, with some notable exceptions, capital and trade flows measures were a matter of minor importance for European Monetary Union sovereign bond markets included in our set. On the contrary, central banksʼ liquidity provision indicators had important but asymmetrical effects on the persistence of the European Monetary Unionʼs bond market volatility swings. Although we do not straightly reject the increased market integration hypothesis, these asymmetries suggest that certain domestic factors still weigh heavily in times of stress for market sentiment.

Government bond markets play a major role in the transmission mechanism of monetary policy in the European Economic and Monetary Union (hereafter EMU). The common currency became the vehicle for exercising effective and appropriate policies on many levels and avoiding the consequences of asymmetrical shocks. Over the first years of Eurozone life, the previous literature provided evidence that the common currency has led to government bond yieldsʼ integration due to the elimination of asymmetric shocks and better liquidity conditions, despite deteriorating macroeconomic fundamentals (see for example Abad et al., 2010, Christiansen, 2007, Codogno et al., 2003, Favero et al., 2010, Geyer et al., 2004, Kim et al., 2006, Pagano and von Thadden, 2004 and Schuknecht et al., 2009). Overall, these studies conclude that the harmonization of EMU macroeconomic policies, together with the liquidity risk and the global risk, plays an important role in affecting bond spread fluctuations. The presence of global risk factors should capture portfolio allocation from an international diversification perspective; domestic factors would become less significant over time and government bond spreads would reflect increased market integration, and much less so macroeconomic or liquidity conditions (see for instance, Longstaff, Jun, Lasse, & Singleton, 2011), as mentioned above. Although we do not straightly reject the increased market integration hypothesis, we provide evidence that would instead reveal an asymmetric market response to the same concerns and same policy actions, especially in times of high uncertainty. We therefore assume that certain domestic factors are responsible for these asymmetries. In fact, because Euro-area members gave up monetary policy and national currency, they had to survive negative macroeconomic and financial shocks by relying on other policies. Moreover, retaining national responsibility for fiscal policy and financial regulation did not make things easier. We take an empirical approach and look at volatility swings in some major European sovereign bond markets. We use a Markov switching model suitable for capturing non-linearities in the data and providing an endogenous characterization of two separate regimes observed for market volatility. The identification of the regimes overlaps with the key events that took the center stage in European financial markets, starting with the first Greek bailout in May 2010. We then investigate how market concerns and fears regarding imbalances caused by capital and trade flows and how different policy actions have affected the persistence of volatility swings. Our findings indicate that measures of net foreign assetsʼ positions were a matter of concern only in the case of Greece, given that the country was relying on external capital inflows to finance its deep-rooted current account deficit. Trade balance developments had a favourable impact on the market volatility only in Germany. However, central banksʼ liquidity provision measures affected the persistence of market volatility swings favourably in Spain and Ireland but negatively in Greece and Portugal. As government cash and debt management heavily depends on country-specific regulations and traditional arrangements with the central monetary authorities, we regard this as one of those domestic factors affecting market volatility dynamics. Much as in Lane (2012) and other related studies concerning the European sovereign crisis, we support the idea that higher coordination is needed to mitigate the impact of country-specific factors, regulations or institutional arrangements. We consider that our analysis has strong implications for international investorsʼ optimal portfolios decisions. Reallocation between individual EMU countriesʼ assets should be evaluated according to the asymmetries outlined in this study and the probability of lying within one market regime or another. The structure of the paper is as follows. Section 2 discusses the proposed methodology, Section 3 presents the data, while Section 4 shows the empirical analysis and discusses the main findings. Finally, Section 5 summarizes the conclusions.

In this paper, we adopt a Markov switching model with both a constant and time-varying specification of the transition probabilities in order to better characterize volatility dynamics in some major EMU sovereign bond markets. Our endogenous identification of the market volatility regimes corresponds to major events that have shaped the European financial crisis in the last years. We investigate several determinants of market volatility dynamics to which we apply two types of transformation to better segregate information from data. We focus on determinants that capture institutional sector imbalances generated by capital and trade flows and proxies for policy actions that have the potential to mitigate crisis effects. The findings support the proposition that net foreign assetsʼ positions and trade balance developments are a matter of minor importance for volatility dynamics, liquidity provision measures of Eurozone central banks have important but asymmetrical effects, which could be possibly explained by relying on country-specific factors such as, for example, government liquidity management. In fact, having a common monetary policy, but national fiscal policies and country-specific regulations for the financial sector has not been a very good shield in face of negative shocks.