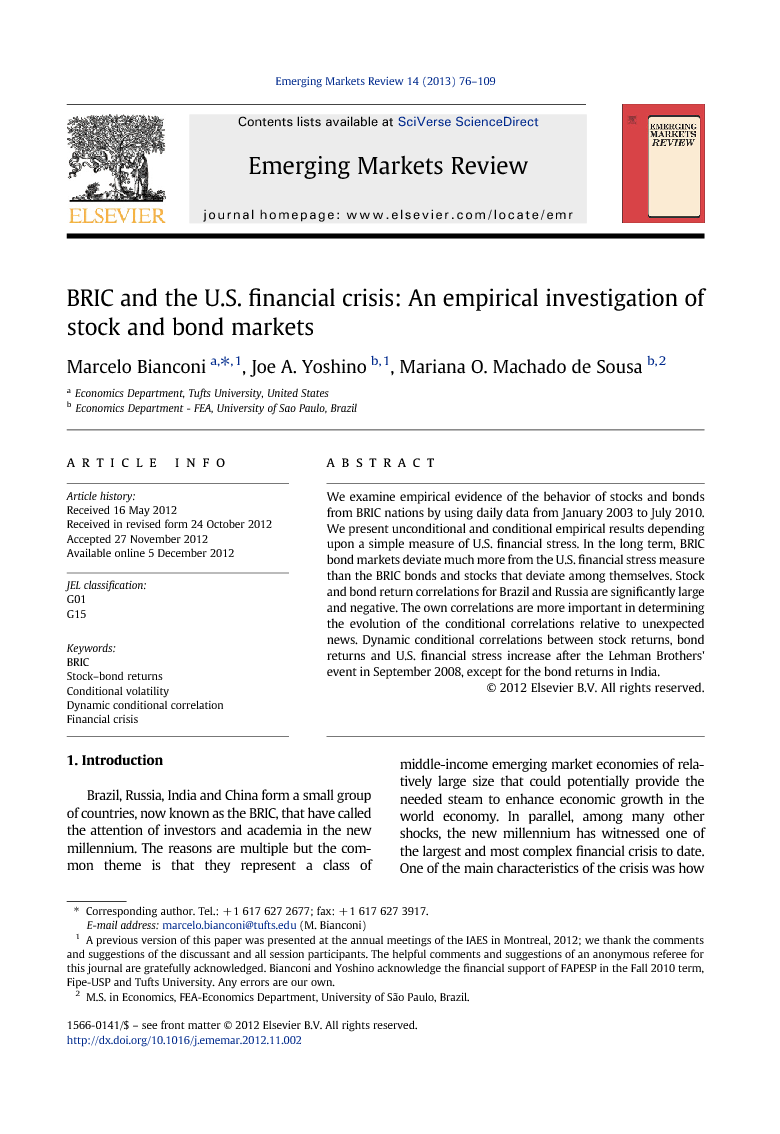 Brazil, Russia, India and China form a small group of countries, now known as the BRIC, that have called the attention of investors and academia in the new millennium. The reasons are multiple but the common theme is that they represent a class of middle-income emerging market economies of relatively large size that could potentially provide the needed steam to enhance economic growth in the world economy. In parallel, among many other shocks, the new millennium has witnessed one of the largest and most complex financial crisis to date. One of the main characteristics of the crisis was how rapidly it spread from the U.S. housing market to its financial market and then to the rest of the world. According to the IMF, 2009a and IMF, 2009b, developed countries had gone through a gross domestic product drop of respectively 7.2% and 8.3% on the 4th quarter of 2008 and 1st quarter of 2009. Facing a weaker external demand and illiquid financial markets, developing countries – especially after the Lehman Brothers' bankruptcy episode on September 2008 – have suffered the consequences from the Subprime crisis, although in a less intense way when compared to the U.S. and Western Europe. Fig. 1 shows the GDP annual real growth of the G7 group and the BRIC, Brazil, Russia, India and China. Full-size image (45 K) Fig. 1. GDP (var. % 2006–2010). Figure options Our main motivation stems from the impact of the financial crisis on the BRIC nations relative to the source of the crisis. The main focus is on the measurement of transmission of financial shocks from the U.S. to stock and bond markets of the BRIC countries. The importance of this line of inquiry is multiple. We would like to determine whether or not this group of emerging economies can be considered insulated from the financial stress of the U.S.; whether it can provide diversification opportunities; whether it can perform the role of the locomotive in sustaining world economic growth.3 The four BRIC countries vary in their structural characteristics, economic policies and geopolitical importance. China and India are economies with most population living in rural areas, and relatively closed and state-controlled capital markets. Their development strategy is export led, based on domestic industrialization for export markets. Meanwhile, Brazil and Russia have most of their population living in urban areas. Brazil and Russia are primarily natural resource-based economies and well known commodity exporters. Their capital markets, while developed at very different periods and pace, are much more open and currently subject to relatively lower state controls. Our empirical analysis uses daily data from January 2003 to July 2010 and is fourfold. First, we examine unconditional volatility measures of BRIC and U.S. markets and use the heat map tool developed by the IMF, 2008, IMF, 2009a and IMF, 2009b to understand how volatility spreads across the BRIC nations over time. We use information from the heat maps to estimate simple short term VARs to understand the impact of a simple measure of financial stress, based upon the S&P500 volatility index VIX and the spread between the UK Libor and the U.S. federal funds rate, the TED spread, on the returns to stocks and bonds in the BRIC countries. Next, we use Johansen's (1988) cointegration framework to examine long term relationships among the BRIC countries and the U.S. financial stress measure.4 Finally, conditional on our cointegration results, we use multivariate GARCH methods and dynamic conditional correlations of Engle (2002) to examine conditional dynamic volatility and correlations of the BRIC market returns, distinguishing between own autocorrelations and news effects. In terms of the unconditional volatilities, we find that for stock returns the U.S. crisis spread through Brazil, Russia, China and India which gave an identification for a short term VAR. For bond returns, the U.S. crisis spread through Brazil, Russia, India and China. The cointegration results confirm some of the short term evidence above, but, most importantly, for the long term, stock index levels in Brazil and India are related to the U.S. financial stress measure, but not the stock levels in Russia and China. The multivariate GARCH and dynamic conditional correlation results show that neither news nor autocorrelation of correlations plays a predominant role in the case of the dynamic conditional correlations of stock returns.5 The dynamic conditional correlations among the stock returns of all BRIC nations have increased since the beginning of the financial crisis in September 2008. In terms of bond returns, all the BRIC countries display significant conditional heteroskedasticity with Russia as the most responsive country to conditional volatility news, while China does respond and shows signs of volatility instability in its bond returns index. In this case, the own correlations are more important in determining the evolution of the conditional correlations of bond returns relative to the unexpected news.6 The dynamic conditional correlations among bond returns of all the BRIC nations have increased after the September 2008 event, but not for India-EMBI which is seen to be insulated and uncorrelated to other BRIC countries. For the joint behavior of the stocks and bonds, they are significantly negatively correlated for Brazil and Russia, but not significant for China and India. The returns of stocks in Brazil are significantly negatively correlated with Russia and China and bond returns in Brazil are negatively correlated with the stock returns in Russia and India. The bond returns in Russia are significantly negatively correlated with the stock returns in India. The largest correlations are between Brazil and Russia.7 The reminder of this paper is as follows. Section 2 provides a literature review. Section 3 briefly describes the data. Section 4 presents simple preliminary statistical and short term VAR analysis of the data while Section 5 extends to long term analysis and dynamic correlation analysis. Section 6 provides a summary and concludes.