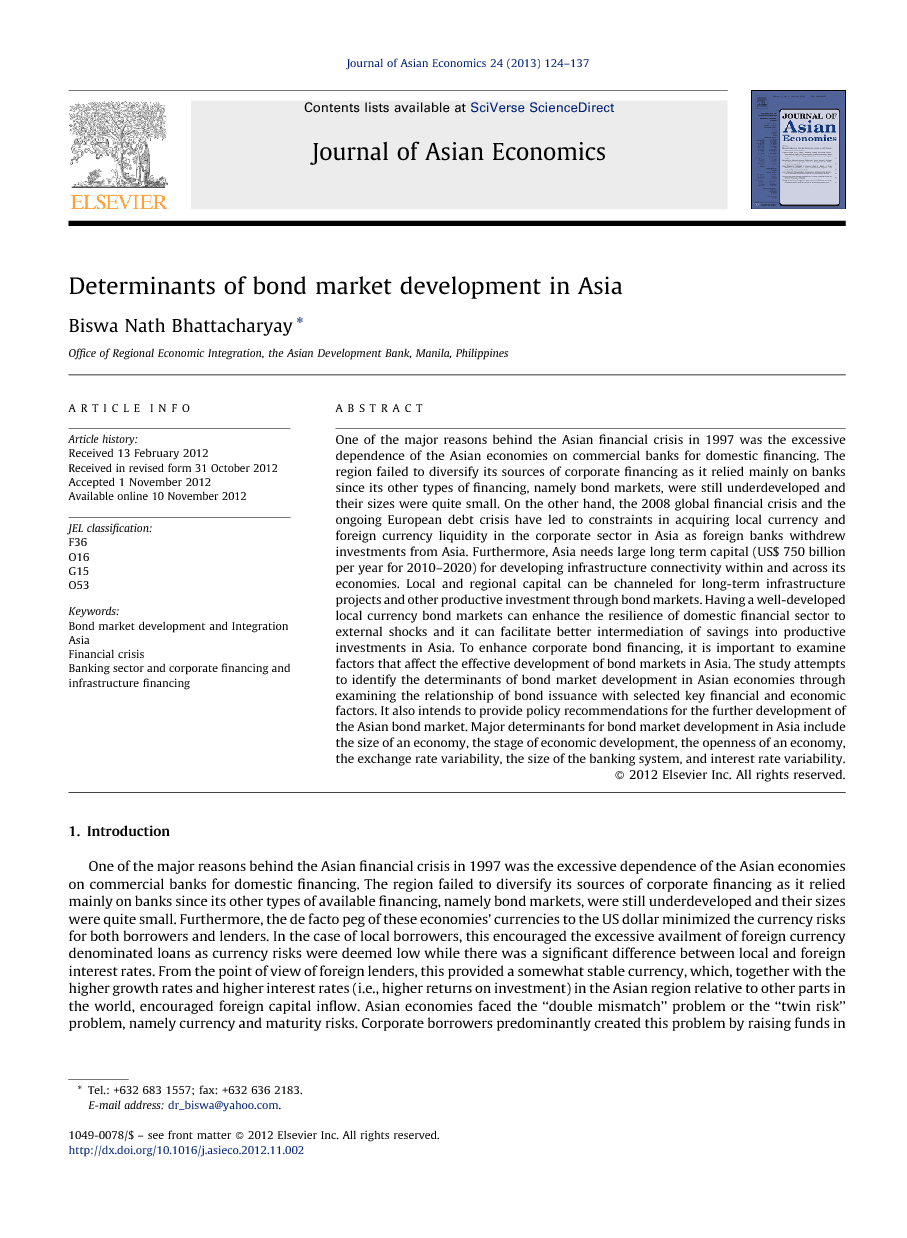 One of the major reasons behind the Asian financial crisis in 1997 was the excessive dependence of the Asian economies on commercial banks for domestic financing. The region failed to diversify its sources of corporate financing as it relied mainly on banks since its other types of financing, namely bond markets, were still underdeveloped and their sizes were quite small. On the other hand, the 2008 global financial crisis and the ongoing European debt crisis have led to constraints in acquiring local currency and foreign currency liquidity in the corporate sector in Asia as foreign banks withdrew investments from Asia. Furthermore, Asia needs large long term capital (US$ 750 billion per year for 2010–2020) for developing infrastructure connectivity within and across its economies. Local and regional capital can be channeled for long-term infrastructure projects and other productive investment through bond markets. Having a well-developed local currency bond markets can enhance the resilience of domestic financial sector to external shocks and it can facilitate better intermediation of savings into productive investments in Asia. To enhance corporate bond financing, it is important to examine factors that affect the effective development of bond markets in Asia. The study attempts to identify the determinants of bond market development in Asian economies through examining the relationship of bond issuance with selected key financial and economic factors. It also intends to provide policy recommendations for the further development of the Asian bond market. Major determinants for bond market development in Asia include the size of an economy, the stage of economic development, the openness of an economy, the exchange rate variability, the size of the banking system, and interest rate variability.

In view of the Asian crisis in 1997, the ongoing global financial and economic crisis, and the ongoing European debt crisis, the development of bond markets in Asia assumes high importance for financing the region's corporate sector and large demand for infrastructure. Even though Asia's bond market witnessed considerable growth in recent years, the bond market financing size, particularly the corporate bond size is still quite low. Therefore, it is essential to identify the determinants of bond market development. The analyses were conducted by using simple OLS, multivariate OLS, Fixed Effects, Random Effects, and GLS models. It can be concluded that the major determinants of bond financing are: (1) The size of the economy for corporate and government bonds; (2) The stage of economic development for total, government and corporate bonds; (3) Openness of the economy for total and corporate bonds; (4) The size of the banking system total and government bonds; and (5) Variability in interest rate for total, government and corporate bonds. Well-developed bond markets can provide Asia with alternative sources of financing and at the same time improve the region's financial resilience by balancing the high dependence on the banking sector. Achieving a better balance between bank finance and bond markets requires a more focused, top-down approach. Asia also needs to utilize its huge savings and international reserve for meeting large needs of productive investment in the region, particularly in infrastructure through bond markets development. Regional cooperation schemes, such as the ABF and ABMI are important instruments for facilitating regional bond market development. There is an urgent need to strengthen, expand and deepen these initiatives and to include other emerging economies of Asia, such as India and other major South and Central Asian economies. In this regard, multilateral development banks (MDBs) such as the ADB has an important role to play in developing Asia's bond markets. New initiatives, such as developing liquid corporate bond market and broadening the issuer base may also prove useful. In order to further integrate and deepen bond markets, Asian economies need to adopt several measures including (i) harmonization and strengthening of financial regulation and credit and trading standards; (ii) legal and regulatory framework conducive to investors; (iii) developing innovative financial instruments and promoting better access to regional and international investors; (iv) a regional guarantee mechanism; (v) a harmonized regional clearing and settlement system; and (vi) enhanced local and regional credit rating system among others. Asia needs to mobilize a large amount of capital for financing their huge infrastructure needs for developing connectivity within and across its economies. The financing needs for Asia's infrastructure are estimated to be around US$ 750 billion per year in energy, transport, telecommunications, water and sanitation during 2010–2020 (Bhattacharyay, 2010). Infrastructure projects are usually long-term in nature. Given this huge requirement, one of the possible ways to bridge financial gaps is to tap Asia's large savings and international reserves and to channel them to infrastructure investment. In 2009, the total annual savings of the 11 major Asian economies4 was approximately US$ 3,390 billion, while the stock of total foreign exchange reserves reached US$ 4,686 billion. At present, a large portion of these savings are invested in markets of developed economies at a low return. This huge financial resource may provide an effective solution to the problem of financial gap. Local and regional capital can be channeled for long-term infrastructure projects and other productive investment through bond markets. Strengthening, integrating and deepening local bond markets, particularly in local currencies can play a significant role in mobilizing the required funds for enhancing Asian connectivity. The rationale of such investment is, it will not only stimulate domestic economies but also enhance regional-level connectivity and integration, thereby increasing regional demand and intra-regional trade and thus rebalancing Asia's growth away from high dependence of export to advanced economies, such as US and Europe. Strategies for the development of robust domestic bond markets include (Fabella & Madhur, 2003): (1) Sustaining a stable macroeconomic environment with low inflation and stable interest rates; (2) Developing a healthy government bond market that would serve as a benchmark for the corporate bond market; (3) Completing the post crisis agenda of banking sector restructuring; (4) Improving corporate governance; (5) Strengthening the regulatory framework for bond market; (6) Rationalizing tax treatment of bonds; (7) Broadening the investor base; and (8) Promoting the growth of regional bond market centers. Furthermore, in order to further develop and integrate bond market, Asia needs to promote bond issuers and investors from the region as well as outside the region. This requires legal and regulatory framework conducive to investors, a regional guarantee mechanism, harmonized credit and trading standards, a regional clearing and settlement system and enhanced local and regional credit rating system. Asian Development Bank (ADB) and other multilateral development banks such as World Bank and International Finance Corporations with knowledge and financial resources have been playing an important role in developing aforementioned bond market infrastructure. They need to play a more prominent role in strengthening Asian bond markets in coming years.