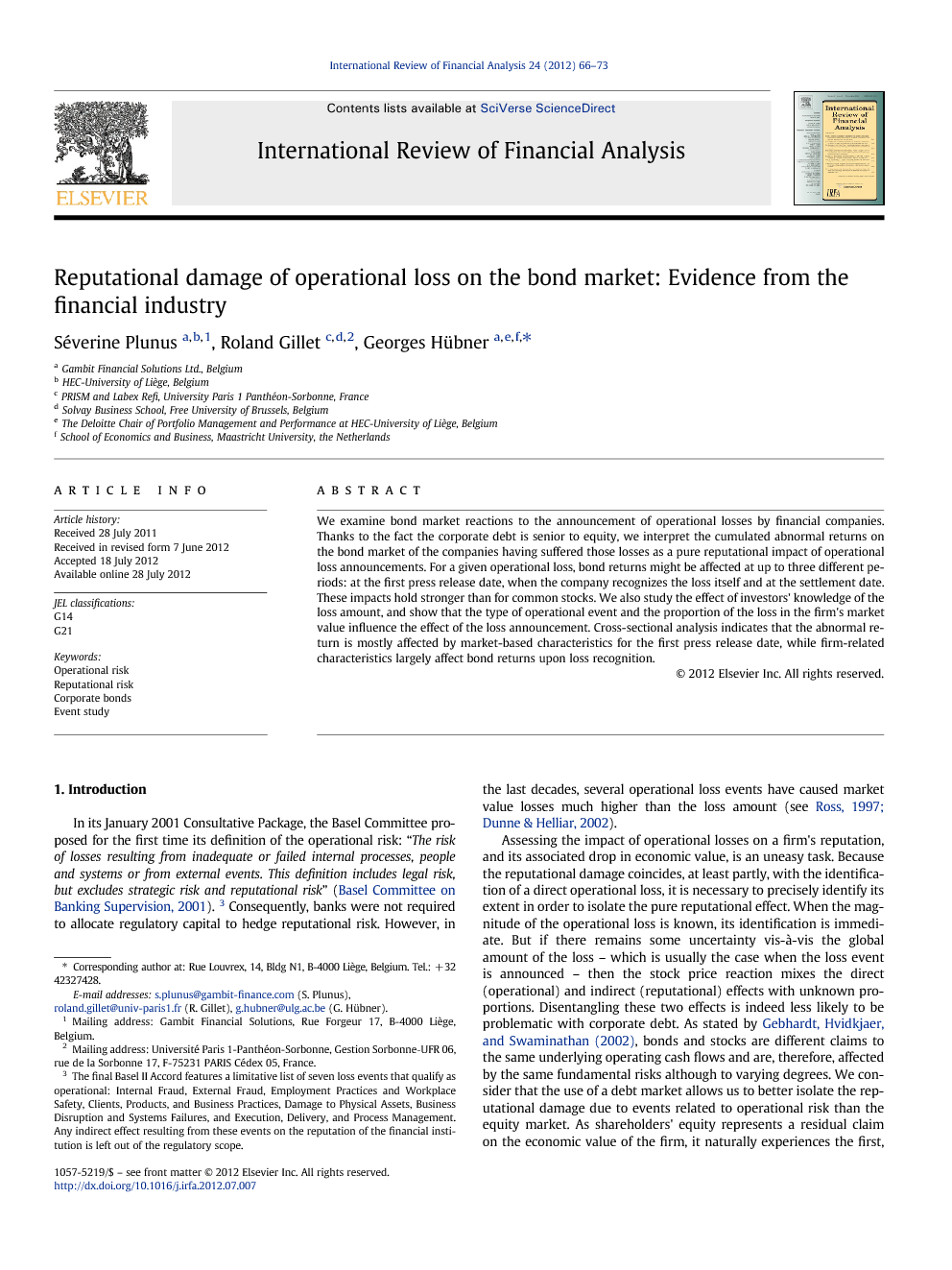 We examine bond market reactions to the announcement of operational losses by financial companies. Thanks to the fact the corporate debt is senior to equity, we interpret the cumulated abnormal returns on the bond market of the companies having suffered those losses as a pure reputational impact of operational loss announcements. For a given operational loss, bond returns might be affected at up to three different periods: at the first press release date, when the company recognizes the loss itself and at the settlement date. These impacts hold stronger than for common stocks. We also study the effect of investors' knowledge of the loss amount, and show that the type of operational event and the proportion of the loss in the firm's market value influence the effect of the loss announcement. Cross-sectional analysis indicates that the abnormal return is mostly affected by market-based characteristics for the first press release date, while firm-related characteristics largely affect bond returns upon loss recognition.

In its January 2001 Consultative Package, the Basel Committee proposed for the first time its definition of the operational risk: “The risk of losses resulting from inadequate or failed internal processes, people and systems or from external events. This definition includes legal risk, but excludes strategic risk and reputational risk” ( Basel Committee on Banking Supervision, 2001). 3 Consequently, banks were not required to allocate regulatory capital to hedge reputational risk. However, in the last decades, several operational loss events have caused market value losses much higher than the loss amount (see Ross, 1997 and Dunne and Helliar, 2002). Assessing the impact of operational losses on a firm's reputation, and its associated drop in economic value, is an uneasy task. Because the reputational damage coincides, at least partly, with the identification of a direct operational loss, it is necessary to precisely identify its extent in order to isolate the pure reputational effect. When the magnitude of the operational loss is known, its identification is immediate. But if there remains some uncertainty vis-à-vis the global amount of the loss – which is usually the case when the loss event is announced – then the stock price reaction mixes the direct (operational) and indirect (reputational) effects with unknown proportions. Disentangling these two effects is indeed less likely to be problematic with corporate debt. As stated by Gebhardt, Hvidkjaer, and Swaminathan (2002), bonds and stocks are different claims to the same underlying operating cash flows and are, therefore, affected by the same fundamental risks although to varying degrees. We consider that the use of a debt market allows us to better isolate the reputational damage due to events related to operational risk than the equity market. As shareholders' equity represents a residual claim on the economic value of the firm, it naturally experiences the first, mechanical loss due to an operational event, whatever its magnitude and degree of certainty. Thus, although the return effect is likely to be much less pronounced on debt contracts, it is also presumably purely reputational. The hypothesis of a strong sensitivity of bond returns to adverse events tends to be confirmed by the only two event studies that analyze announcements that have the same (positive or negative) impact on both markets. Hand, Holthausen, and Leftwich (1992) examine the impact of bond rating agency downgrade and upgrade announcements on the stock and bond markets and find that the latter react only for downgrades, but more strongly than stock markets, which react significantly for both positive and negative events. DeFond and Zhang (2009) study the stock and bond market reactions on bad and good news earnings surprises, and also find that bond markets tend to react more strongly to bad news, while stock markets react more strongly to good news. This paper represents, to our knowledge, the first study purely dedicated to the bond market reactions to the announcement of operational losses. So far, three articles have examined the reputational damage of operational losses in the financial industry, but all of them focus on the impact on the stock market. Cummins, Lewis, and Wei (2006) compare the impact of large operational loss announcements in listed US banks and insurance companies. Both types of companies experience significant negative price reactions and their market value drops by an amount exceeding their operational loss. de Fontnouvelle and Perry (2005) conduct an event study of operational loss announcements for banks listed on developed financial markets worldwide, and find that only the announcement date has a significant, negative impact on the price. Their explanatory variable is a “loss ratio”, defined as the ratio between the loss amount and the market capitalization of the firm. They interpret a market value loss greater than the operational loss announced as evidence of reputational damage. In the most closely related paper to ours, Gillet, Hübner, and Plunus (2010) assimilate operational losses to reputational losses, but their approach suffers from the fact that common equity is the most junior claim on the firm value, as discussed above. We exploit a clean database of bonds issued by listed US financial companies having experienced a significant operational loss. We carry out an event study methodology in two steps. In the first stage, we study the abnormal bond returns around dates that may have an influence on the firm reputation. Three event dates could matter: the first press release, the recognition by the company, and the final settlement. We discriminate, for the first press release date,4 the losses on the basis of the investors' knowledge of the real loss amount, the type of operational event and the proportion of the loss in the firm's market value. In the second stage, we perform a cross-sectional analysis with the aim to detect the determinants of the market reaction to the operational loss events. Our results indicate that it is worthwhile to perform a distinct analysis on the bond market. We find economically as well as statistically different evidence from the one retrieved from the stock market analysis of similar events. In particular, the date of recognition of the loss by the company has a particular meaning for the bond market participants. As we can provide a “clean” reputational interpretation of abnormal bond returns, this sheds particular light on the informational content of firm disclosures of operational events in the financial sector. Section 2 describes the sample construction and displays the descriptive statistics on the final sample and the methodology used for measuring the impact of operational losses on reputation. Section 3 presents the empirical results of our event study. In the last section (Section 4), a cross-sectional analysis is performed on the abnormal returns computed in Section 3.

Our study is, to our knowledge, the first one dedicated to the bond market reactions to the announcement of operational loss. In order to capture the loss of reputation due to operational losses announcement, we compute the cumulated abnormal returns on the bond market of the companies having suffered those losses. We have shown that although less pronounced than on the stock market, the bond price impact of reputational risk is significant, and lasts longer than the mere first press release as it extends to the recognition of the loss by the company, when applicable. For one operational loss, the firm performance might be affected at up to three different periods, if the firm delays to confirm a press announcement, and to proceed to the settlement of this loss. Usually, the first two events encounter a negative effect; whereas the settlement, when made at a different time from the first press release and the recognition, display a positive effect, which might be explained by tax considerations. The study also discriminates the losses on the basis of the investors' knowledge of the real loss amount, the type of operational event and the proportion of the loss in the firm's market value. We show that the knowledge of the real loss amount announced by the press tends to hinder the negative market reaction, as bondholders seem to appreciate transparency. From the event type discrimination, debtholders tend to penalize harder the involuntary weakness of the firms (“clients, products and business practices”) contrary to the shareholders who typically assign a greater reputational impact to fraud events. Finally, the bond market seems to react consistently with the size of loss, whereas the stock market participants appear to penalize financial corporations in a similar way regardless of the fact that the loss is small or large. The last section of our paper presents a cross sectional analysis, with a set of explanatory variables that is adapted to the bond market context. Our main findings are that a high leverage has a negative impact on the performance of the bonds on the first press release and the settlement date, whereas the absolute level of debt tends to affect the abnormal return on the recognition event. This analysis also allows us to identify the negative impact of the relative loss size on the recognition event.