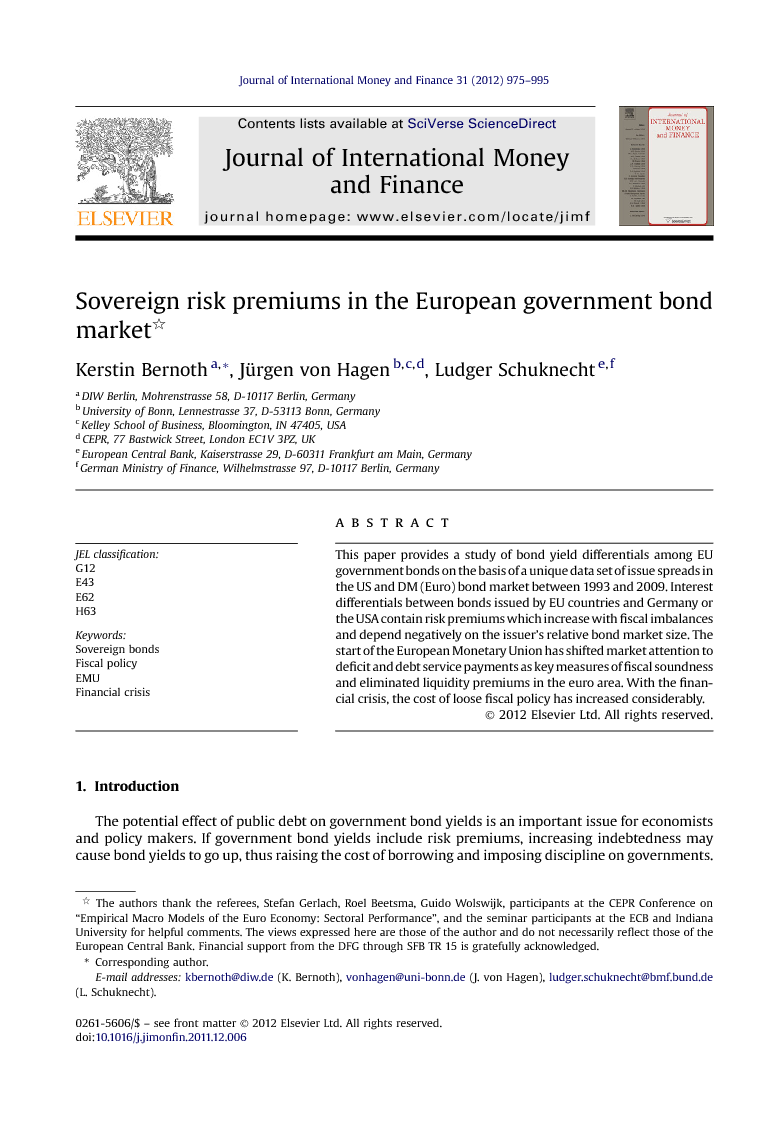 This paper provides a study of bond yield differentials among EU government bonds on the basis of a unique data set of issue spreads in the US and DM (Euro) bond market between 1993 and 2009. Interest differentials between bonds issued by EU countries and Germany or the USA contain risk premiums which increase with fiscal imbalances and depend negatively on the issuer’s relative bond market size. The start of the European Monetary Union has shifted market attention to deficit and debt service payments as key measures of fiscal soundness and eliminated liquidity premiums in the euro area. With the financial crisis, the cost of loose fiscal policy has increased considerably.

The potential effect of public debt on government bond yields is an important issue for economists and policy makers. If government bond yields include risk premiums, increasing indebtedness may cause bond yields to go up, thus raising the cost of borrowing and imposing discipline on governments. Market discipline of this kind is especially relevant and important in the European Monetary Union (EMU), in which the governments of the member states can issue debt, but do not have the possibility to monetize and inflate away excessive debts. Whether such risk premiums can be identified empirically and how large they are has attracted considerable interest of policy makers as well as academics. This paper makes four contributions to the existing literature. First, we use a new data set consisting of yield-at-issue spreads between DM (Euro after 1999) and US$ denominated bonds issued between 1993 and 2009 by several EU governments and Germany or the US government, respectively. European countries issued substantial amounts of DM and US$ denominated debt before the start of EMU in 1999; since then, they issue most debt in euros and still substantial amounts in US$. Using primary market spreads has the advantage that the data reflect the cost of actual borrowing for the sovereign issuer.1 Furthermore, using primary spreads assures the comparability of observations at different points in time, since, in contrast to average yields on debt outstanding, the residual maturity is always the full maturity. Using euro-denominated bonds, we treat public debt issued by member states of the euro area as foreign-currency debt. This is justified by the fact that no national government controls the monetary policy of the euro area, and no government can use monetary policy to inflate away its own debt. Our data set has several advantages compared to those used in earlier studies. Looking at DM (Euro) and US$ denominated bonds avoids the problem of exchange rate risk that arises in the comparison of bonds denominated by governments in their national currencies. Furthermore, the comparison of spreads on such issues is not distorted by differences in national tax regimes. Finally, we consider bonds issued by national governments, which allows us to consider sovereign risk at the national rather than the sub-national level. Our second contribution is that we use data from before and after the start of EMU. This allows us to estimate directly the effects of monetary union on the risk premiums paid by European governments. A priori, these effects are ambiguous. Monetary union may increase the default risk of member governments, since the latter have surrendered their monetary sovereignty and, therefore, the possibility to monetize their debts, and other governments and the monetary union’s central bank may not be compelled to rescue governments in financial crises. However, monetary union may also have reduced the perceived default risk, if markets anticipate that member governments in fiscal troubles will be bailed out by other governments or the central bank. Our third contribution is that our empirical analysis distinguishes between risk premiums and liquidity effects in the bond market. Identifying the liquidity component of yield spreads is important, because it points to a lack of financial market integration rather than differences in fiscal positions as a source of yield differentials.2 Empirically, we observe that German government bond yields are still below those of bonds issued by governments with much better debt positions. This has been interpreted as showing that bond yields do not reflect fiscal performance appropriately (Reuters, June 2002). But the fact that German bonds enjoy a yield advantage compared to others may instead be due to the size of the German bond market and the fact that German bonds can be traded immediately at lower transaction costs and with a smaller risk of price changes due to individual transactions. Our fourth contribution is that we analyze in detail the impact of the global financial crisis on government bond pricing. Government bond spreads in the euro area have risen sharply since the collapse of the investment bank Lehman brothers. We investigate, whether this sharp increase can be explained by a mere deterioration of the fiscal position of European governments or whether financial markets corrected their risk perception of sovereign defaults by changing the market price of government credit risk. Our paper proceeds as follows. Section 2 gives an overview of the related literature. Section 3 motivates the empirical approach and sets up a reduced-form equation of the yield spread. Section 4 describes the data we use for the estimation. Section 5 reports the estimation results, and Section 6 concludes.

This paper contributes to the literature on the impact of fiscal policies on interest rates by analyzing the effect of government debt and deficits on sovereign bond yields in Europe. We exploit a unique data set of US$, DM, and, after 1998, Euro-denominated government bond issue spreads between 1993 and 2009, which has the advantage that we can ignore exchange risks and distortions by differences in national tax regimes. We examine whether government bond yield differentials across EU countries are determined by credit risk and liquidity effects, and whether EMU and the financial crisis in 2008/09 had a significant impact on bond pricing. Our results show that yield spreads respond significantly to measures of government indebtedness both before and after the start of EMU. Interestingly, after the start of EMU, markets seem to pay less attention to government debt levels than they did before, while deficits and debt service ratios continue to be monitored as indicators of creditworthiness. This result may reflect the fact that public debates of the fiscal performance of EMU countries have generally focused on deficits and disregarded debt ratios since 1999. With the financial crisis, Germany seems to have gained a safe-haven status in international financial markets in the crisis, a position it did not have before. Market reaction to fiscal loosening has increased considerably, with the result that market discipline has become stronger. Before EMU, yield spreads were also affected by liquidity premiums. In the euro-denominated debt market, however, these premiums have vanished after the start of EMU.