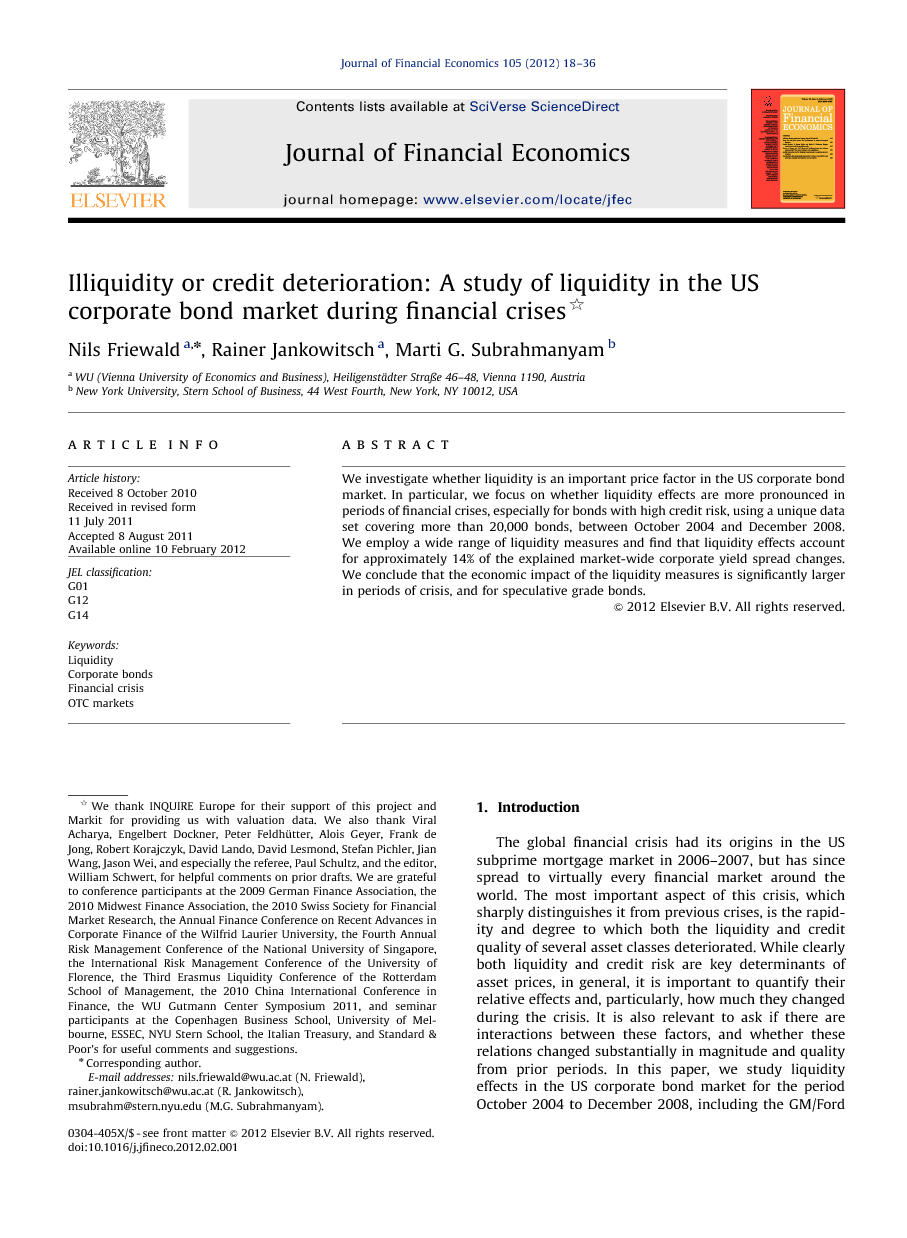 We investigate whether liquidity is an important price factor in the US corporate bond market. In particular, we focus on whether liquidity effects are more pronounced in periods of financial crises, especially for bonds with high credit risk, using a unique data set covering more than 20,000 bonds, between October 2004 and December 2008. We employ a wide range of liquidity measures and find that liquidity effects account for approximately 14% of the explained market-wide corporate yield spread changes. We conclude that the economic impact of the liquidity measures is significantly larger in periods of crisis, and for speculative grade bonds.

Financial economists have been concerned with the impact of liquidity and liquidity risk on the pricing of assets for at least two decades. During this period, several issues relating to liquidity effects in asset prices have been analyzed at a theoretical and empirical level by academic researchers, particularly in the context of US equity markets. More recently, the focus on liquidity has been broadened to include a wider class of assets such as derivatives and fixed income securities. This trend has accelerated since the onset of the subprime crisis, as the discussion of liquidity has attracted much interest among academics, practitioners, and regulators. While the crisis has manifested itself in almost every financial market in the world, the most stressed markets, by far, have been those for fixed income securities and their derivatives, particularly those with credit risk, including corporate bonds, CDSs, and CDOs. These developments require that the scope of the discussion of liquidity be extended to include the interplay between liquidity and credit. Corporate bond markets are far less liquid than related equity markets, since only a very small proportion of the universe of corporate bonds trades even as often as once a day. In addition, corporate bonds trade in an over-the-counter market, where there is no central market place. Hence, conventional transaction metrics of liquidity such as bid-offer quotes do not have the same meaning in this market compared to exchange traded markets. The issue of liquidity in this relatively illiquid, OTC market is fundamentally different from that in exchange traded markets: Thus, it is necessary to use measures of liquidity that go beyond the standard transaction-based measures common in research in more liquid, exchange traded markets. We employ a wide range of liquidity measures to quantify the liquidity effects in corporate bond yield spreads. Our analysis explores the time-series and cross-sectional aspects of liquidity using panel and Fama-MacBeth regressions, respectively. We find that the liquidity proxies in the specified regression models account for about 14% of the explained time-series variation of the yield spread changes. Furthermore, we find that the effect of the liquidity measures is far stronger in both the GM/Ford crisis and the subprime crisis, most remarkably the economic effect more than doubles in the subprime crisis. All the liquidity proxies considered exhibit statistically as well as economically significant results. In particular, measures estimating trading costs based on transaction data show the strongest effects. Comparing investment grade to speculative grade bonds, we find lower liquidity for speculative grade bonds as well as a stronger reaction to changes in liquidity. These results show that bonds with higher credit risk also are more exposed to liquidity risk. These results are useful for many practical applications, particularly pricing and risk management, and also have implications for regulatory policy. They also highlight the importance of transparency of trades for OTC markets, with reporting to a central authority being a crucial element for price discovery.